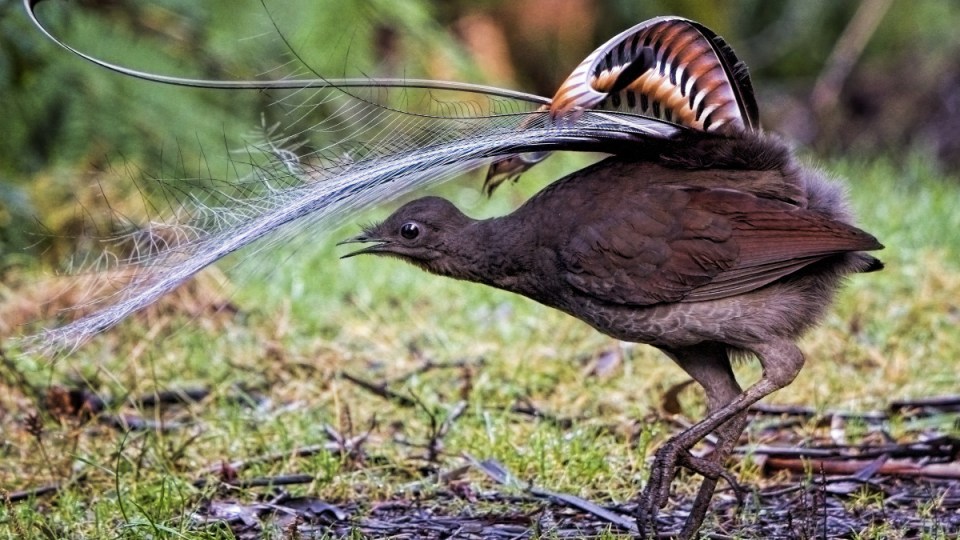 Scientists said the bird's behaviour after the fire had never been documented before. Photo: Getty

PJ Wallis, nervous and filled with adrenaline, was preparing to defend her friend’s home from a raging bushfire when she saw something remarkable.

“We were waiting for this fire to hit and then all these lyrebirds kept coming down and drinking water out of the dam,” she said.

“It was almost like any lyrebird in this huge radius knew that that was the safest place to be.”

Ms Wallis was in a valley near Wollombi, New South Wales, on the edge of the Yengo National Park.

She managed to get a series of photographs of 11 birds, but said there were closer to 20 birds in the dam at one point.

“The fire was about 30 metres away and roaring and intense,” Ms Wallis said.

“[The dam] was like a safe haven, so when the fire came through with the heat and the smoke, it actually never climbed the lip of the dam.

“It was almost like they were protected in this little crater and I think that they knew that. They knew that that was the safest place to be because surely there aren’t that many lyrebirds just in that area.

“I’ve never seen that many lyrebirds in my life.”

Alex Maisey, a PhD candidate at La Trobe University, has spent almost two decades watching lyrebirds and said he had only ever seen six or seven lyrebirds together at one time.

“It’s really incredible, because it’s a rare thing to see a bird that’s generally solitary and territorial coming together like this,” he said.

“I don’t believe that’s ever been recorded on camera, so in that way it’s a really unique photograph.

Ms Wallis said she saw at least six lyrebirds at the dam after the fire front passed through, but was too busy to get an accurate count of survivors.

“To see this many lyrebirds crowded around a farm dam the size of a tennis court is extremely unusual,” Mick Roderick from BirdLife Australia said.

“I’m not aware of it happening before and yeah, the image is quite fascinating.”

Lyrebirds have been known to hide in gullies and wombat holes during fires and have even muscled their way under wet blankets and hidden with people sheltering from fire.

“To me the photo immediately shows that animals have incredible survival instincts and these birds, they nailed it. They went to the right place,” Mr Roderick said.

“These animals were forced to take their plan B.”

The photos shows at least seven male birds in the dam and Mr Maisey said each would have its own territory, suggesting the birds travelled to get to the dam.

“Potentially these birds have at some stage come across this dam and they remember it’s there,” he said.

“Birds have got incredible spatial memory, so they’ll know where things are in their landscape.

“And in this instance, the males have potentially travelled kilometres to this dam to try and escape this fire, which is quite a remarkable thing.”

Almost all of Yengo National Park has burned, part of nearly one million hectares of bush to the north of Sydney consumed by the mega blaze.

BirdLife Australia estimates that across NSW more than 50 per cent of lyrebird habitat has been affected by fire.

“Often for the lyrebird it’s not necessarily the fire that kills them, it’s when they come out again and their food source – all the invertebrates in the rich leaf litter – has now burnt and they’ve got to try and find food in this post-fire environment,” he said.

“And then in the long term, lyrebirds like long, unburnt vegetation for breeding, so female lyrebirds will typically breed in the oldest vegetation.

“So a big fire event can actually really affect lyrebird populations for decades.”

Mr Roderick said there were many questions still to be answered, but he expected the fires would have a profound impact.

“Everything comes back to habitat really,” Mr Roderick said.

“There may only be a limited amount of suitable lyrebird habitat that is unburnt and this is a situation that we haven’t really encountered before.

“BirdLife Australia will be potentially looking for volunteers to help in monitoring some of these birds in an effort to see how they cope and how we can help recreate habitat in the future.”