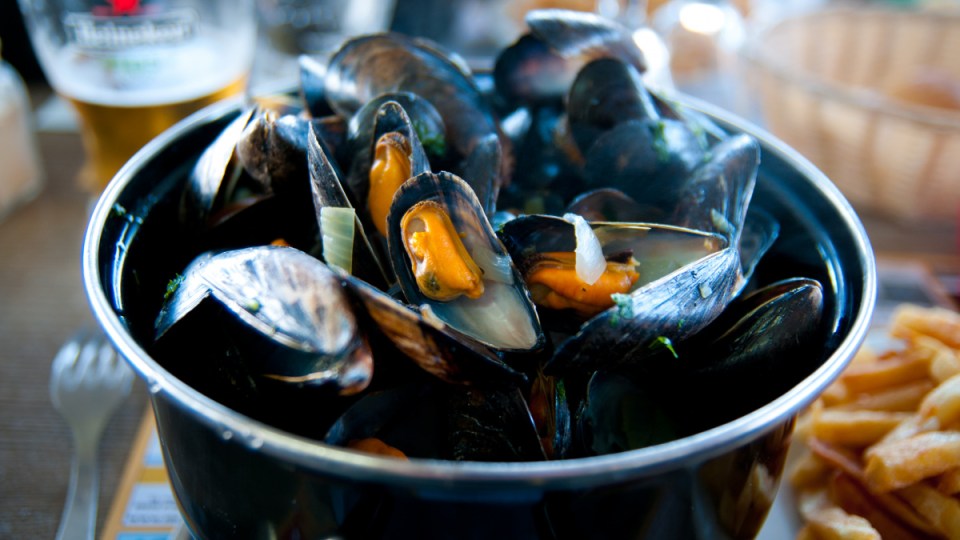 One of the “world’s worst” invasive species is interbreeding with its Australian cousin and steadily taking over the coastline – and nobody knows if this is a disaster or possibly a blessing in disguise.

This has been going for maybe 100 years, or maybe 600 when European ships first poked their noses on to our shores.

This is a mystery of many parts.

The native and the invader look the same, they taste the same and it’s only by examining their genomes – as done for the first time, recently, by scientists from the University of Queensland – that they can be told apart.

We’re talking about the humble blue mussel, belonging to the genus  Mytilus, whose shiny, empty shells litter beaches all over the world – and whose ecological sins can almost be forgiven when simmered in white wine, butter and sprinkled with parsley.

The dominating species is Mytilus galloprovincialis – what we might call the monster mussel – native to the Atlantic and the Mediterranean.

Each carry genetic markers identifying which ocean they belong to.

In the 1970s, they arrived in South Africa – which had no blue mussels – and soon colonised 2000 kilometres worth of coastline.

Scientists started talking about Mytilus galloprovincialis as a possible threat to biodiversity.

“Mussels are well known for hitching a ride on ships, which is probably how Mytilus galloprovincialis has colonised so many parts of the world including Australia,” said University of Queensland School of Biological Sciences researcher Dr Iva Popovic.

The Australian story is much more complicated

Dr Popovic is the corresponding author of a new paper that confirms Australia actually has a native blue mussel, Mytilus planulatus – a matter of some contention.

“We know this because there is fossil evidence from Aboriginal middens that there was an endemic species,” she said.

The native species is believed to have diverged from Mytilus galloprovincialis between 100,000 and 600,000 years ago – and this means they are genetically, as well as morphologically, very similar.

“So we’ve had this situation of not knowing if the mussels we see in Sydney Harbour and other areas are Mytilus galloprovincialis or the native species. Because you can’t tell them apart,” she said.

“Previous genetic studies have tried to tease this apart, but because they were using traditional genetic tools, the information based on one or two genetic markers actually doesn’t have enough power to differentiate between these species.”

Dr Popovic and her colleagues took a genomic approach where they sequenced thousands of genes that gave them the “highest possible resolution that you can get from the genetic data that allowed us to better understand some of these questions.”

One of them being: Where did they start colonising the coast?

The research was able to show at least two introductions of Mytilus galloprovincialis had occurred in south-eastern Australia – one from the Atlantic Ocean and the other from the Mediterranean Sea.

Because Atlantic and Mediterranean populations are genetically distinct, “we were able to conclude that these two introductions occurred independently”.

Associate Professor Cynthia Riginos, who oversaw the study, said the  interbreeding between the invasive and native species was extensive, the consequences of which can only be guessed at.

“The influx of non-native genes is called genetic pollution, and can sometimes lead to the formation of so-called hybrid swarms, and possibly extinction via hybridisation,” said Dr Riginos, in a prepared statement.

“Because this mussel is adapted to warm waters, there is the added concern that genetic pollution could be magnified by climate change.

“But right now we really cannot determine whether or not Mytilus galloprovincialis is a threat to Australia’s marine biodiversity – there’s more work to do.”

But here’s the twist, because Mytilus galloprovincialis is more tolerant of warm water, “a new enhanced tolerance to warm conditions might safeguard mussels in their ecological roles and future-proof Australian mussel farming”.

In other words, the invader might keep us stocked in blue mussels as global warming otherwise bring havoc.