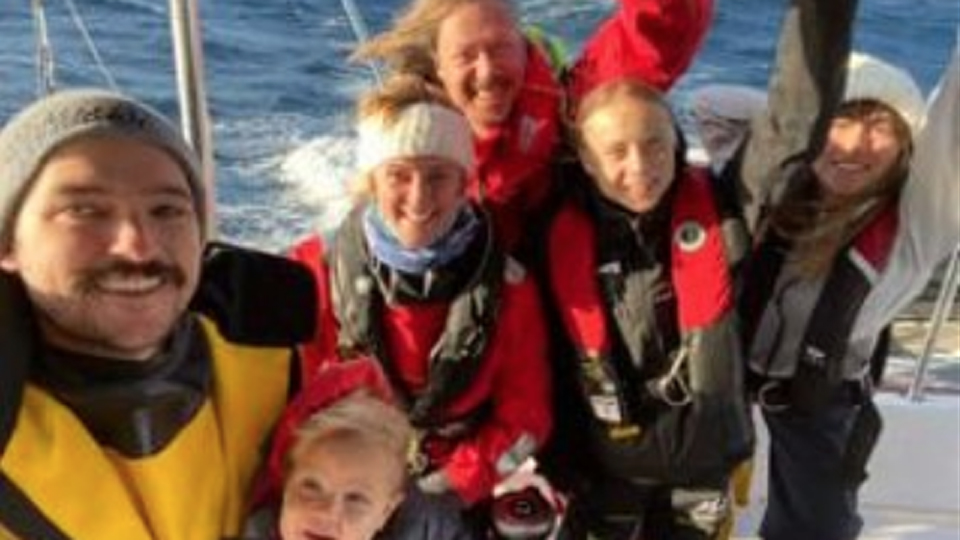 Greta Thunberg (second from right) aboard the Vagabonde. Photo: Twitter

Teenage environmental crusader Greta Thunberg and the Australian family she hitched a ride on a catamaran from the US to Portugal with are just hours away from completing their epic voyage.

Ms Thunberg, a 16-year-old from Sweden, has inspired “climate strikes” around the world and needed to be in Madrid this week for the United Nations Climate Change Conference.

Australian couple Riley Whitelum and Elayna Carausu, along with their 11-month-old son Lenny, volunteered to pick up Ms Thunberg in their 15-metre catamaran at a port in Virginia on November 13.

After battling rough conditions, sea sickness and other challenges the Atlantic Ocean presented on nearly three weeks at sea, Ms Thunberg announced they are scheduled to arrive in Lisbon, Portugal, on Tuesday morning (local time).

“Our last day on the ocean!” she tweeted to her three million followers. “We can now almost smell land!”

The early morning arrival in Lisbon will be a date later than scheduled. The UN conference started in Madrid on Monday, and runs until December 13.

To limit greenhouse gas emissions, Ms Thunberg refuses to fly on planes, despite leading a campaign that takes her across the globe.

She had travelled from Sweden to California by boat, train and electric car.

But the teenager issued a call for help to cross the Atlantic after the UN conference was moved in November from Santiago to Madrid because of political unrest in Chile.

The Madrid summit is intended to put the finishing touches to the rules governing the 2015 Paris accord. That involves creating a functioning international emissions-trading system and compensating poor countries for losses they suffer from rising sea levels and other consequences of climate change.

Mr Whitelum and Ms Carausu have spent four years sailing around the world on their catamaran, La Vagabonde, and were near the US east coast when they heard about Ms Thunberg’s plight.

The couple has documented their adventurous life on YouTube and have collected more than 1.172 million subscribers.

See more about the couple’s voyage at sailing-lavagabonde.com.