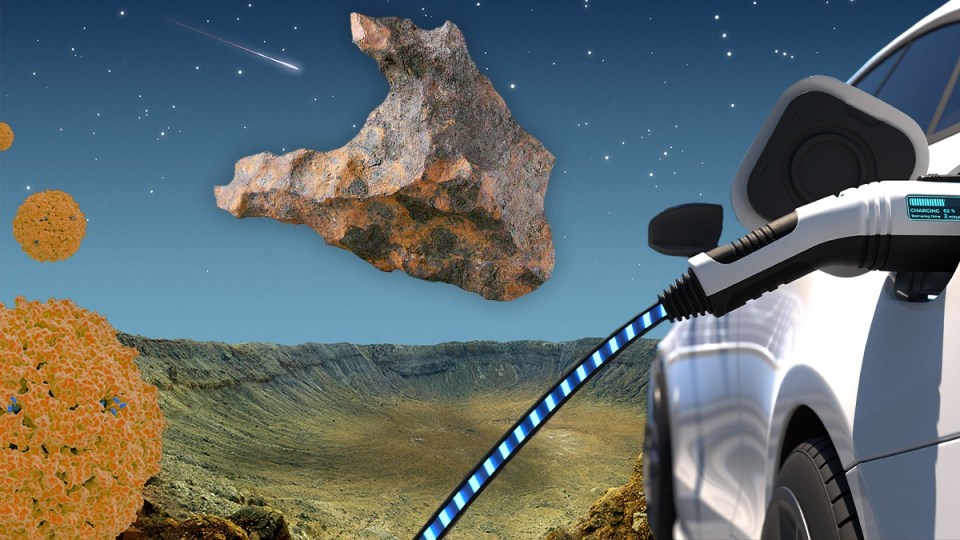 A 50,000-year-old meteorite could hold the key to super-fast charging and nanomedicine. Image: TND

Diamonds formed 50,000 years ago during a high-energy shockwave from an asteroid could hold the key to better electronics and faster battery charging, scientists have said.

An international study published this month discovered never-before-seen carbon structures that formed when an asteroid collided with Earth have “unique and exceptional properties”.

Scientists from Europe and the US used cutting-edge crystallography and spectroscopy to examine the mineral, called ‘Lonsdaleite’, first discovered in an iron meteorite found more than 100 years ago in the Canyon Diablo in the Arizona desert.

The meteorite collided with Earth about 50,000 years ago, and the extreme heat and pressure of the impact’s shockwave forged parts into Lonsdaleite.

First believed to be a pure yet unconventional diamond, the new study found the Lonsdaleite in the Canyon Diablo meteorite in fact contains a complex nanostructure that consists of interlacing diamond and ‘graphene-like’ structures, the team found.

Graphene is a hexagonal structure just one carbon atom thick – a million times thinner than a human hair. It is as light as a feather yet as strong as a diamond, transparent yet highly conductive.

But growing traditional graphene uses toxic chemicals and extremely high temperatures, and once made is prone to corrosion.

Graphene is also highly conductive, and its electrical properties cannot be altered or turned off.

Australian scientists have already successfully made Lonsdaleite in a lab at room temperature.

Before then, the only way to make Lonsdaleite involved diamond anvils heated to 400 degrees Celsius, or gunpowder and compressed air used to fire graphene at walls at nearly 25,000km/h.

Researchers now know much more about how Lonsdaleite is formed, and how to use simple instruments to detect the unique nanostructures.

Now that those diamond-graphite nanostructures have been discovered in Lonsdaleite, the researchers believe it will open the door to new materials that have wide-ranging engineering applications.

Study co-author and University College London’s Professor Christoph Salzmann said the new-found discovery could allow scientists to design unique materials that are ultra hard yet malleable, while also allowing them to dial in precise electrical properties.

“The discovery has therefore opened the door to new carbon materials with exciting mechanical and electronic properties that may result in new applications ranging from abrasives and electronics to nanomedicine and laser technology,” Professor Salzmann said in a statement.

Researchers have also raised the possibility of using Lonsdaleite to supercharge fast-charging devices like electric cars, or for hyper-accurate surgeries or drug delivery mechanisms.

But Professor David McKenzie from the University of Sydney, one of the researchers who created Lonsdaleite at room temperature, told The New Daily those claims were ‘‘highly speculative’’.

‘‘Sounds a bit of an overreach to me,’’ Professor McKenzie said.

‘‘We definitely feel that more work would need to be done before those claims could be justified.’’