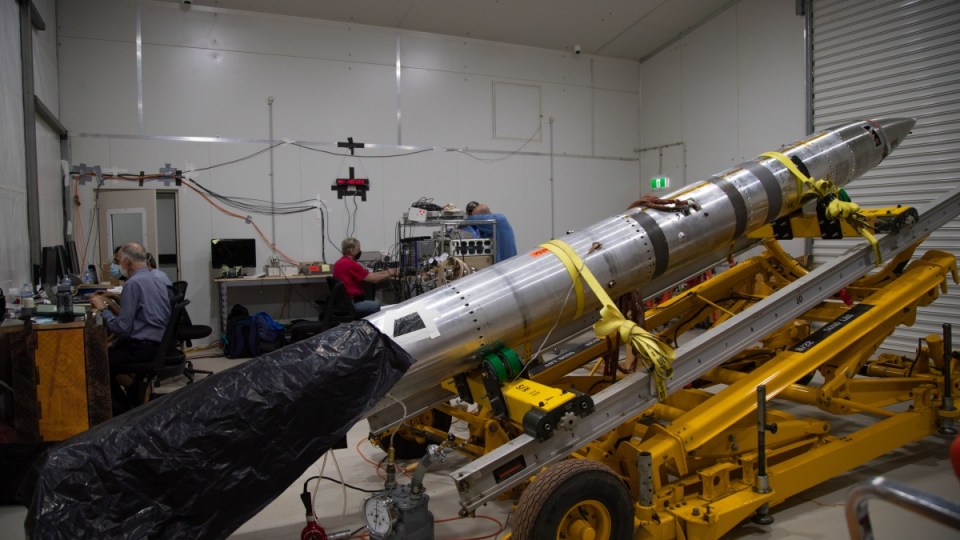 The launch of a NASA rocket from the Arnhem Space Centre has been delayed. Photo: AAP/Equatorial Launch Australia

The launch of a NASA rocket from the remote wilderness of the Northern Territory has been delayed due to consistent winds.

After a previous day’s delay because of heavy rain, the Suborbital Imaging Spectrograph for Transition region Irradiance from Nearby Exoplanet host stars, or SISTINE, mission launch was again delayed on Tuesday night.

“We went through the countdown with every intent to launch, but the consistent winds were outside the parameters that we considered safe,” Michael Jones, executive chairman and Group CEO of Equatorial Launch Australia, said in a statement.

“On that basis, we made the decision to delay the launch tonight.”

We have delayed tonight's @NASA SISTINE launch due to the impact of weather. Michael Jones, CEO said, "We went through the countdown intent to launch, but consistent winds were outside the parameters that we considered safe". Details of the rescheduled window will be avail soon.

Information about a rescheduled launch window would be provided in due course, Mr Jones said.

A first successful launch occurred late last month from the Arnhem Space Centre on the Dhupuma Plateau, near Nhulunbuy.

Together with a third rocket to launch later this month, the SISTINE rocket will take measurements of ultraviolet light to help narrow the search for habitable planets.

The two missions will work together to get a full picture of the ultraviolet light coming from stars Alpha Centauri A and B.

Just how much ultraviolet radiation is emitted by different types of stars is poorly known.

“We need to understand the stars so that we can understand any planets we find there,” said Kevin France, astronomer at the University of Colorado, Boulder, and principal investigator for the SISTINE mission.

The rocket launched last month will also help scientists explore how a star’s light can influence a planet’s habitability.

The rocket is carrying an X-ray Quantum Calorimeter, allowing University of Michigan scientists to measure interstallar X-rays with precision to provide new data on the structure and evolution of the cosmos.

On Earth, oxygen is a biomarker associated with life.🌱But biomarkers aren’t as trustworthy for planets orbiting other stars.

NASA is launching the SISTINE mission on a sounding rocket to study stars and their effect on exoplanet atmospheres.
Full story: https://t.co/4GXVbM3zyz pic.twitter.com/z191Od4Oct

About 75 NASA personnel are in Arnhem Land for the missions, the agency’s first in Australia in 27 years and first-ever from a commercial spaceport outside the US.

NASA last launched from Australia in 1995, when its rockets lifted off from the Royal Australian Air Force Woomera Range Complex in South Australia.

The local Yolngu helped build Arnhem Space Centre, which is owned by Equatorial Launch Australia, on their land.

They’re also taking part in the upcoming launch, including retrieving rocket modules when they return to Earth.

Weather forces NASA to delay rocket launch from NT base