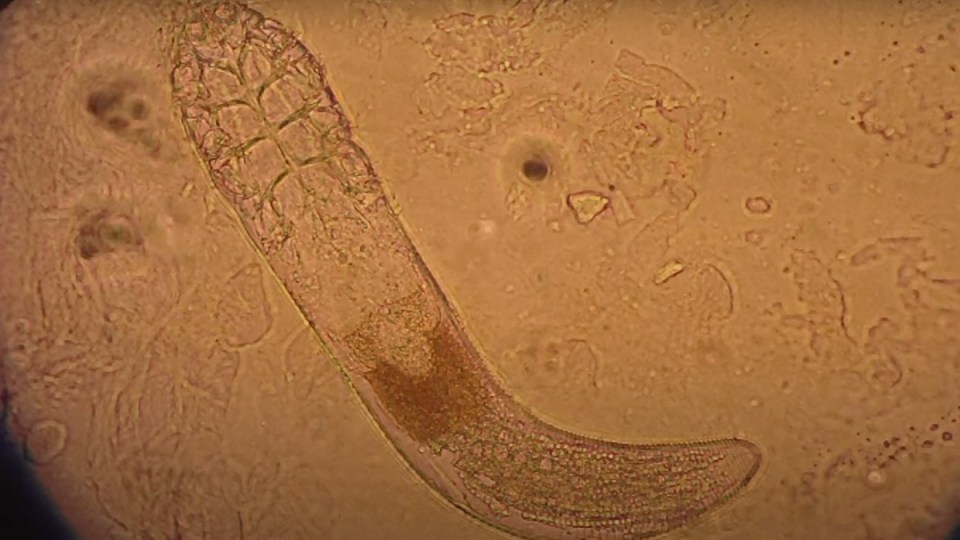 Scientists have discovered more than you might want to know about mites. Photo: University of Reading

When birds live on an island where there are no predators, their wings tend to shrink and they lose the power of flight.

The reason being is that flight takes up a lot of energy, requiring the bird to eat more food.

At the same time, hunting and foraging for food is almost constant and wearying. Every day is a precarious balancing act.

But everything changes on that peaceful island, where nothing is trying to kill them: Life is so comfortable and secure that birds don’t need an escape plan. And so, in an evolutionary shift, their wings shrink away.

A similar thing has happened with the microscopic mites (Demodex folliculorum) that live in our pores and cheerfully mate on our faces at night.

Where once the mites were parasites, they have become much more simplified organisms – and have developed a more symbiotic relationship with humans.

A fascinating new study suggests that they are “becoming one” with people.

Think of them as live-in help on a pretty good wicket.

The mites move in when we’re born

Our early life in the womb is the only time in our lives that we’re mite free.

We pick them up when we’re born and carry them for the rest of our lives.

Each mite is about 0.3mm long. There are more than five of them residing on every square centimetre on your face and nipples, and they can be found in and around your eyelashes.

These mites favour the hair follicle where they feed on the sebum – the oily, waxy substance produced by your body’s sebaceous glands.

Sebum mixes with fat molecules (lipids) and serve to protect the skin.

Mites are often blamed for skin irritation but an overabundance of sebum suggests you might need more of them than less.

In the night, in the dark, if you get a tingling feeling on your face it’s probably not mites moving between follicles to mate. Actually, that’s what they’re up to but you’re unlikely to feel them at it.

New study: More than you might want to know

The researchers found that “their isolated existence and resulting inbreeding is causing them to shed unnecessary genes and cells and move towards a transition from external parasites to internal symbionts”.

Dr Alejandra Perotti, Associate Professor in Invertebrate Biology at the University of Reading, who co-led the research, said: “We found these mites have a different arrangement of body part genes to other similar species due to them adapting to a sheltered life inside pores. These changes to their DNA have resulted in some unusual body features and behaviours.”

Tiny vampires confined to the night

The in-depth study of the Demodex folliculorum DNA revealed that by living in isolation, the mites aren’t exposed to external threats.

They have no competition for food (all that yummy sebum) – and they don’t encounter other mites with different genes to breed with.

This means their genetic pool as a species has shrunk – but they lost a host of genes which has “caused them to become extremely simple organisms with tiny legs powered by just three single cell muscles”.

It’s akin to those island birds losing their wings.

A consequence of their evolved simplicity is that these mites “survive with the minimum repertoire of proteins – the lowest number ever seen in this and related species”.

This has left them with fewer tools to combat the outside world.

They’re forced to be active at night, partly because their gene reduction has taken away their inbuilt UV protection, and also because they have also lost the gene “that causes animals to be awakened by daylight”.

A weird example of humans helping out

In small invertebrates, melatonin works to keep them active at night.

But face mites are no longer able to produce melatonin, which potentially leaves them unable to get around in the night as well as the day.

So how is it they stay up all night making whoopee in our pores? They access the melatonin we secrete through our skin as the sun goes down.

Overall, their mating habits are a little odd – so too their wedding tackle.

The mites’ reproductive organs have moved toward the head of their body, and males “have a penis that protrudes upwards from the front of their body”.

The scientists say this means they have to position themselves underneath the female when mating, “and copulate as they both cling onto the human hair”.

The mites have evolved extra mouth appendages for gathering food, and these aid their survival at a young age.

Although there’s a range of openings for food to get in, some researchers had assumed that mites don’t have an anus “and therefore must accumulate all their faeces through their lifetimes before releasing it when they die, causing skin inflammation”.

This alleged bottoming out is untrue. They have an anus that does what anuses do.

And they’re probably not to blame for as many skin infections as once thought.

Dr Henk Braig, co-lead author from Bangor University and the National University of San Juan, said: “Mites have been blamed for a lot of things. The long association with humans might suggest that they also could have simple but important beneficial roles, for example, in keeping the pores in our face unplugged.”

The end of days

The lack of exposure to mates outside the species means that the mite gene pool is dangerously lacking in diversity.

The researchers believe this may have set them on course “for an evolutionary dead end, and potential extinction”.

In other words, they could become the Dodo of the mite world.