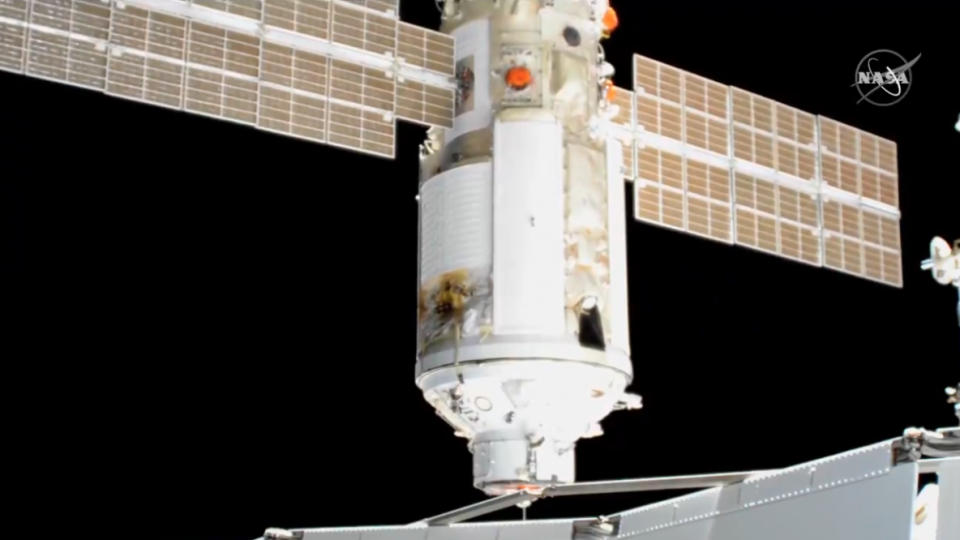 A Russian 'space freighter' module arrives at the international with fuel and supplies. Photo: NASA

The future of the International Space Station hangs in the balance, with the head of Russia’s space program saying “only the complete and unconditional lifting” of sanctions can guarantee its continuing operation.

His comments come as the United States, European Union, and Canadian space agencies missed a deadline to meet Russian demands for lifting sanctions on Russian enterprises and hardware.

Western partners, he said, “cannot manage without Russia, because no one but us can deliver fuel to the station.”

Rogozin added that “only the engines of our cargo craft are able to correct the ISS’s orbit, keeping it safe from space debris.”

Later on Saturday, Rogozin wrote on his Telegram channel that he received responses from his Western counterparts vowing to promote “further cooperation on the ISS and its operations.”

He reiterated his view that “the restoration of normal relations between partners in the ISS and other joint (space) projects is possible only with the complete and unconditional lifting” of sanctions, which he referred to as illegal.

Space is one of the last remaining areas of cooperation between Moscow and Western nations.

US-Russian negotiations on the resumption of joint flights to the space station were underway when Russia launched its military operation in Ukraine last month, prompting unprecedented sanctions on Russian state-linked entities.

So far the US and Russia are still cooperating in space.

A NASA astronaut caught a Russian ride back to Earth on Wednesday after a US record 355 days at the International Space Station, returning with two cosmonauts.

Mark Vande Hei landed in a Soyuz capsule in Kazakhstan alongside the Russian Space Agency’s Pyotr Dubrov, who also spent the past year in space, and Anton Shkaplerov.

Wind blew the capsule onto its side following touchdown, and the trio emerged into the late afternoon sun one-by-one.

‘No one but us can deliver fuel’: Russia says sanctions threaten International Space Station