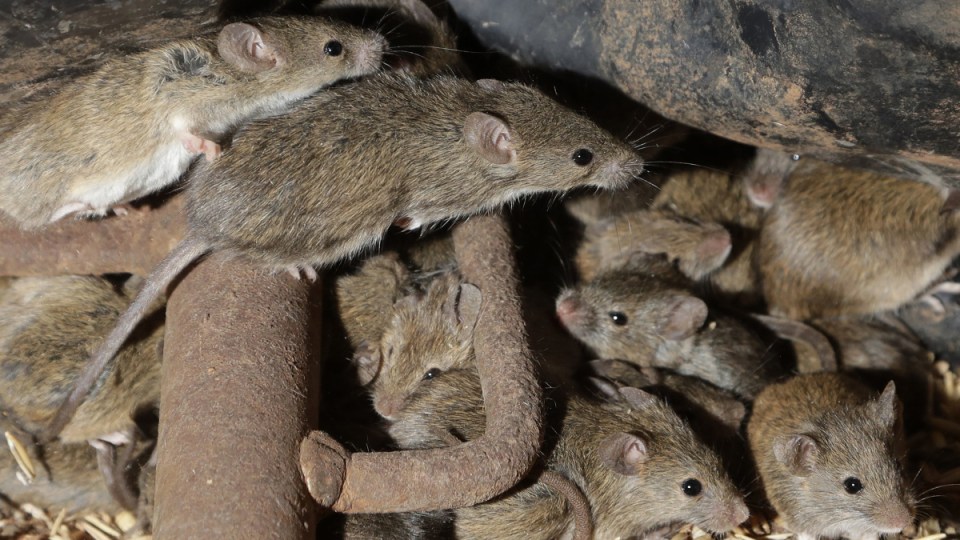 Mice numbers are making a resurgence across Australia, causing concern for farmers and scientists. Photo: AP

Mice are making a “patchy comeback” across Australia, with warnings recent wet weather in parts of the country could see a further build up of the pest.

High mice activity has been recorded by farmers and scientists, with hotspots on the Queensland and New South Wales border, parts of South Australia, northern Victoria and southern NSW.

CSIRO research scientist Steve Henry has been monitoring mice numbers for the past decade.

His team has just finished seven days of monitoring across 26 sites in northern Victoria and southern NSW.

The current flooding coupled with a bumper harvest – is prompting fears of a mice plague resurgence in the Central West.

On one night he and his colleague set 130 traps, with a hit rate of 30 per cent and 35 mice caught. But just a few kilometres away only two mice were trapped.

Mr Henry said it shows just how patchy the occurrence of the rodent is.

He said so far numbers aren’t looking like they will return to the plague proportions experienced in Central NSW and southern Queensland earlier this year, but he’s urged growers to be “vigilant” before planting again.

“Numbers were really really high at the start of the spring, but they’ve declined slightly,” Mr Henry told AAP.

“It’s really patchy… through September, particularly through NSW, where farmers were very vigilant about baiting.”

Steve Henry is an expert in all things mice and is helping communities across Australia better manage mice plagues. https://t.co/JRPTlBHGJC

But he’s warned the rain that has been falling will have a “knock on effect” of putting really good crops on the ground.

“There will potentially be a lot of food left behind.”

Mr Henry says wherever possible farmers should slow the headers down, to avoid food being left behind.

“The less food that gets left behind during the harvest, means less food for mice, that will potentially sustain those populations through the stubble phase and into the autumn.”

Xavier Martin is seeing evidence of a mice return on his property on the Liverpool Plains, in Northern NSW, and could “explode” in parts of NSW again.

“They’re definitely about … summer and autumn are looking ominous with this food source again,” the NSW Farmers Association vice president.

“I’m seriously concerned myself as to just how much grain I’m going to leave behind during my harvest and how to manage that risk … they won’t want to take the bait because they will have another food source,” Mr Martin said.

“The weather has dealt us a wild card because while the rain has drowned some mice, it’s also left them with a potentially abundant food source.”

The mice “might have the last laugh” if food is left in the paddock, he says, and concedes it’s impossible for many farmers to retrieve it.

“The headers just can’t work as efficiently, to recover the crop, in the mud.”

Mr Martin said farmers had to bait whole paddocks and farms over the spring, which has helped.

“With mice… unless you are out walking through the paddocks you don’t actually see those signs of activity,” he said.

“By the time farmers are seeing a few it’s almost too late.”