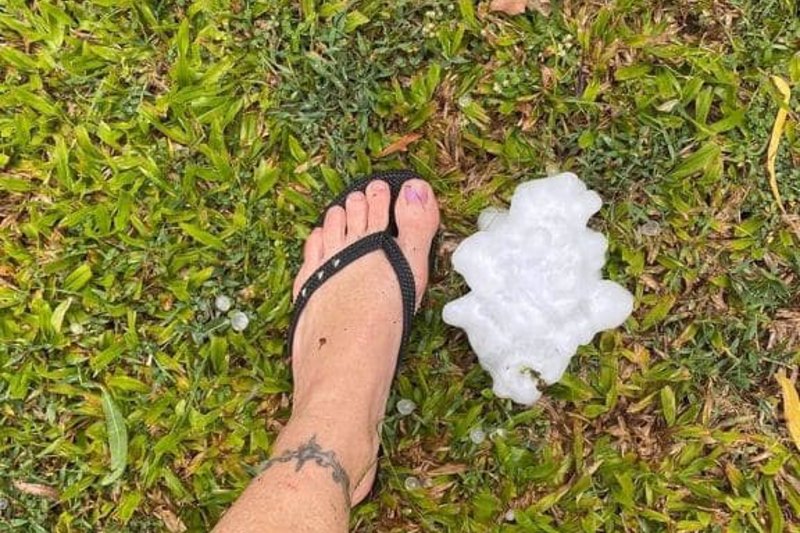 Hailstones that smashed to the ground during a frightening storm in the Mackay region have smashed Australian records.

Some of the hailstones found after Tuesday’s ferocious storm in Yarlboroo, north of Mackay, were 16 centimetres wide – beating the previous record of 14 centimetres, which was also set in Queensland.

Meteorologist Dean Narramore, from the Bureau of Meterology, said the bureau was still verifying the reports – but it appeared records had been broken.

“Luckily we had some residents who took photos of the hailstones measured against tape measures or rulers, from end to end,” he told the ABC on Wednesday.

“We will chat to those people and confirm it is the right measurement and then we can back that up with radar data as well to make sure there was a very intense storm in the region, which matches some of these pictures we are seeing.”

The hail storm hit the area hard, smashing through windscreens and battering trees in its path.

Shocking footage has since emerged of the stones wreaking havoc on vehicles.

Mr Narramore detailed some of the “impressive” photos received by the bureau.

“Some people had it taking up the whole hand, pretty impressive. We are talking grapefruit-sized hail.”

“The very warm and humid air we had at the surface, as that rose into these much colder bits of air above it, it allowed a lot of the rainfall to freeze into hailstones, and is unstable as well.”

“As more moisture continues to feed into the storm, they continue to grow larger and larger before eventually becoming too heavy for the storm to maintain, so they eventually fall to the ground.”

“[It] allowed hail to continue growing before gravity forced it to the ground.”

The monster of hailstorm is the most recent instalment in days of wild weather across much of Australia’s east.

Two tornadoes were recorded near Gladstone and Toowoomba on Monday.

Last Thursday, a wild tornado in Armidale, in northern NSW, flipped cars and tore roofs off houses, destroying 11 buildings in its path.

The Queensland Bureau of Meteorology has since warned of more severe conditions south of Townsville on Wednesday afternoon.

The thunderstorms are likely to produce damaging winds, large, possibly giant hailstones and heavy rainfall that may lead to flash flooding over the next several hours in certain areas.

For more information about your local area, visit www.bom.gov.au/qld/warnings/.