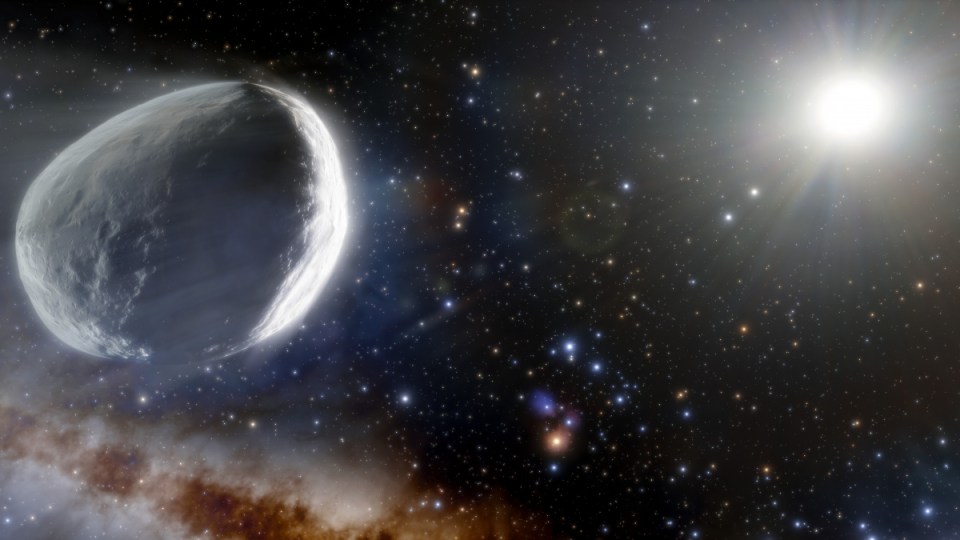 The comet, discovered in June, is so big that it was initially thought to be a dwarf planet. Image: NOIRlab

Very big news in astronomy – US researchers have discovered the biggest and perhaps weirdest comet ever detected, and it’s headed into our inner solar system, its first visit in three million years.

Most comets have a diameter of less than 10 kilometres.

The monster comet, discovered in June, is estimated to be 100 to 200 kilometres across, and about 1000 times bigger than a typical comet.

The huge size is a rough estimate based on how much sunlight the comet reflects. But just about everything about it is massive in scale.

The comet’s inward journey began six trillion kilometres away – 40,000 times farther than the distance between the Sun and the Earth.

Comet Bernardinelli-Bernstein – named after the University of Pennsylvania scientists who discovered it – will arrive at its closest point to the Sun in 2031, known as the perihelion.

But there’s no need to fret about potential oblivion – the comet is predicted to come no closer than Saturn, which is about 1.5 billion kilometres way.

Bernardinelli-Bernstein is the most distant comet to be discovered on its incoming path.

This means that astronomers have “years to watch it evolve as it approaches the Sun, though it’s not predicted to become a naked-eye spectacle,” according to a statement from the National Science Foundation’s National Optical-Infrared Astronomy Research Laboratory (NOIRLab).

What makes the comet so special, aside from its size, “is the fact it hasn’t visited the inner solar system in three million years, roughly the same era that the famous human ancestor ‘Lucy’ was walking the Earth,” according to space.com.

It has an extremely elongated orbit, journeying inward from the distant, immense and mysterious Oort Cloud over millions of years.

The Oort Cloud is thought to hold trillions of comets.

“We have the privilege of having discovered perhaps the largest comet ever seen – or at least larger than any well-studied one – and caught it early enough for people to watch it evolve as it approaches and warms up,” Gary Bernstein said.

Comets are icy bodies that evaporate as they approach the warmth of the Sun.

Obviously they don’t vanish, they just get spookier as the ice on the surface of the comet’s nucleus vaporises and forms a cloud around the nucleus called a coma that can expand out to 80,000 kilometres on a typically sized comet.

The discovery was made following a comprehensive search of six years’ worth of data collected by the Dark Energy Camera, which is located at the Cerro Tololo Inter-American Observatory in Chile.

The camera is helping to map 300 million galaxies across the night sky, but it also captures glimpses of icy celestial bodies that reside along the outskirts of the solar system, beyond Neptune’s orbit.

The data collected by this camera feeds into The Dark Energy Survey, a collaboration of more than 400 scientists across seven countries (including Australia) and 25 institutions.

Biggest comet ever detected heading our way 10 years from now