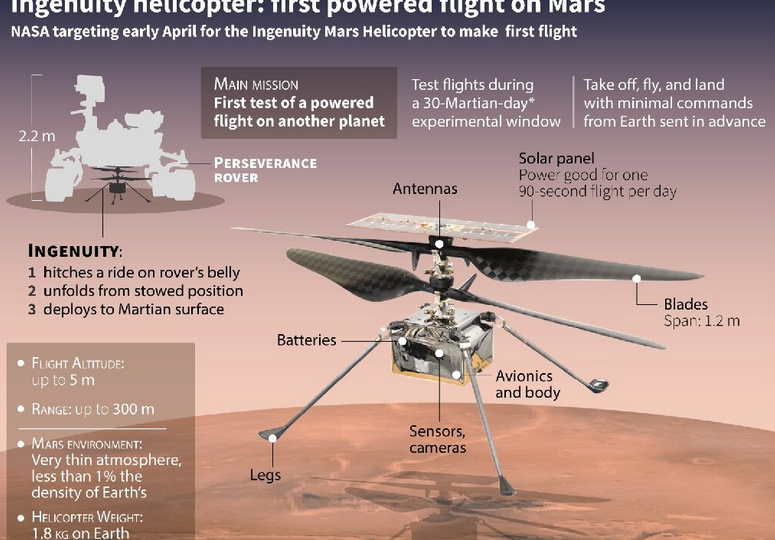 A tiny helicopter built by NASA is ready to fly on Mars as part of the US space agency’s first attempt at a powered, controlled flight on another world.

The Ingenuity helicopter is expected to take to the Martian skies in the coming days – with Wednesday being the earliest time for take-off.

The small chopper is part of a technology demonstration – a project that aims to test a new capability for the first time.

Take-off had been scheduled for Monday, but NASA has said this was delayed to Wednesday at the earliest following a technical issue during a rotor test, which means another test is now needed before the launch.

Ingenuity arrived at the Jezero Crater on February 18 after an eight-month journey spanning about 480 million kilometres, tucked inside the belly of NASA’s Perseverance rover.

After the spacecraft landed, it dropped the drone onto the ground so Ingenuity could prepare for its maiden flight.

About 50 centimetres tall, the helicopter weighs just 1.8 kilograms on earth but is a mere 0.68kg on Mars because of the Red Planet’s smaller size and, consequently, lower gravity.

It is armed with two rotors that spin in opposite directions to maintain the drone’s stability as it climbs into the thin martian atmosphere, roughly about 100 times thinner than earth’s.

As it is a technology demonstration, the helicopter does not have any scientific instruments onboard.

According to NASA, one of Ingenuity’s key objectives is to survive the “bone-chilling temperatures” of the red planet, with “nights as cold as minus 90C”.

For its first flight, the helicopter will take off from the ground and hover in the air about three metres for about 20 to 30 seconds before descending and touching back down on the Martian surface.

If successful, NASA says it will be a “major milestone” – the very first powered flight in another world.

After that, the aircraft will attempt additional experimental flights that will involve travelling further distances and increasing altitudes.

Ingenuity will aim for up to five test flights within a 30 Martian-day (31 earth-day) demonstration window.