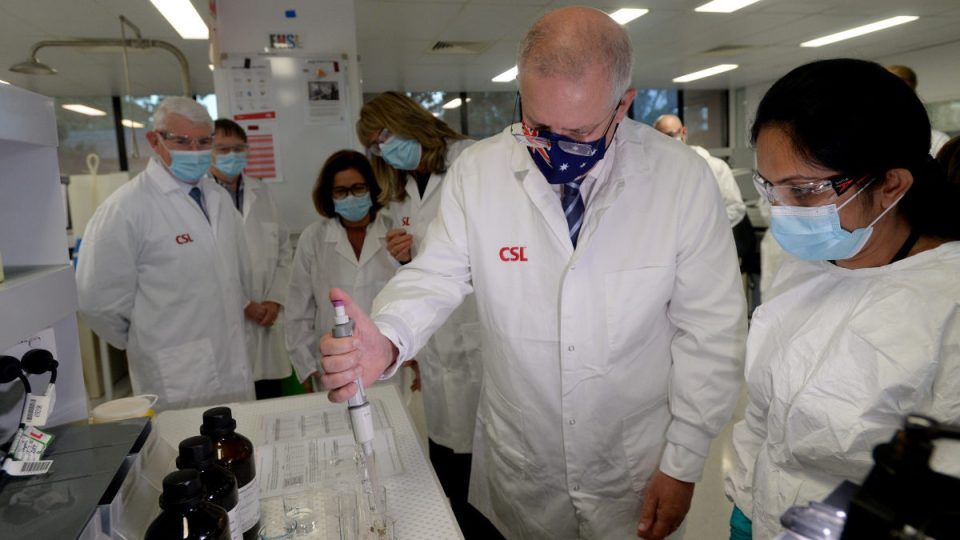 The PM meets CSL staff working on the COVID vaccine at the company's facility in Melbourne. Photo: AAP

Toward the end of the 19th Century, the Australian medical class believed that serum manufacture, for the preparation of vaccines and anti-toxins, ought not to be attempted locally.

When a “stunningly successful” antitoxin serum for diptheria was adopted in Europe, the New South Wales Agent-General in London “was directed to dispatch a regular supply of antitoxin serum to the colonies,” according to a 2002 University of Sydney study paper.

That was 1895. For years, Australian physicians were evaluating different sources of antitoxin supply as they came off the ship.

By the time world war broke out in 1914, Australia was still dependent on overseas supply of vaccines, antisera, diagnostic agents and medicines.

But limited shipping rapidly led to shortages – and in 1915 the Commonwealth government announced it was starting a federal serum institute for preparations of vaccines, serums and anti-toxins.

This was the beginning of the Commonwealth Serum Laboratories, now known as CSL – the company that this week saw its first pallet of locally-manufactured AstraZeneca vaccine come off the factory line.

And just in time. Because another war of sorts has broken out – with Europe blocking all exports of the AstraZeneca vaccine.

And so, CSL is repeating its early history.

Yeah? What else has it done for us

CSL’s trial by fire came at the end of the Great War, with the Spanish flu pandemic, said to have killed 50 million people around the world. It came into Australia with returning soldiers dodging quarantine, and quickly spread through the wider population.

At the time, the Spanish flu wasn’t understood to be a virus, and was responded to as if it was a bacterial pathogen. This wasn’t entirely useless.

According 1997 article in the Public Health Bulletin, a mixed bacterial vaccine “was produced at the Serum Laboratories from pathogens derived from throat cultures from some of the earliest cases.”

Three million doses were used in the course of the epidemic.

There was “good evidence” that the mortality from secondary pneumonia was reduced by vaccination.

In 1923, shortly after the Canadian discovery of insulin, CSL was one of only four laboratories in the world licensed to make it. “Within months, CSL [was] producing enough insulin to meet the needs of all Australians with diabetes,” says the company’s history.

In 1930, CSL and the Walter and Eliza Hall Institute developed the first antivenom for tiger snake bites. CSL continued to develop anti-venoms to all venomous Australian snakes, the redback and funnel-web spiders, as well as ticks, box jellyfish and stonefish.

According to a 1990 book Committed to Saving Lives: A History of the Commonwealth Serum Laboratories,  the production of penicillin during the Second World War was “one of CSL’s greatest achievements, exemplifying its ability to respond rapidly to national needs.”

In 1943, Dr Val Bazeley (later one of Jonas Salk’s senior scientists working on a polio vaccine) was recalled from the Army to run the project and was immediately sent to the United States to study American penicillin manufacturing techniques.

Within ten weeks of Bazeley’s return from the United States, penicillin was being sent to the front. By April 1944, Australia was the first country to release penicillin for civilian use.

Or Dr Nancy Atkinson? She was the Adelaide bacteriologist who, in 1945, produced the first Australian made Bacillus Calmette-Guérin (BCG) vaccine against TB. This vaccine was later produced by CSL.

Throw forward 40 years, when the AIDS crisis was taking hold.

The virus was isolated in May 1984. By December, a high security laboratory was established, and CSL researchers were rapidly developing a confirmatory test for AIDS antibodies.

Nearly four decades later, here we are, with COVID-19 – and much of the world clamouring for vaccines. Thankfully, because of a decision made 105 years ago, we don’t have to.

‘Resistance‘: Sky News envisions climate revolt in election reaction
Jurors deliberate after lawyers give closing arguments in Depp-Heard defamation trial
Dozens of tourists injured, 12 seriously, in WA boating accident at Horizontal Falls
Biloela family to return home to ‘big-hearted’ Qld town
G7 nations vow to quit coal – but they won’t put a date on it
Brisbane mum gets five years for hanging tot from clothesline
The Dish at Parkes celebrates 60th birthday with a mission to the moon
Today's Stories