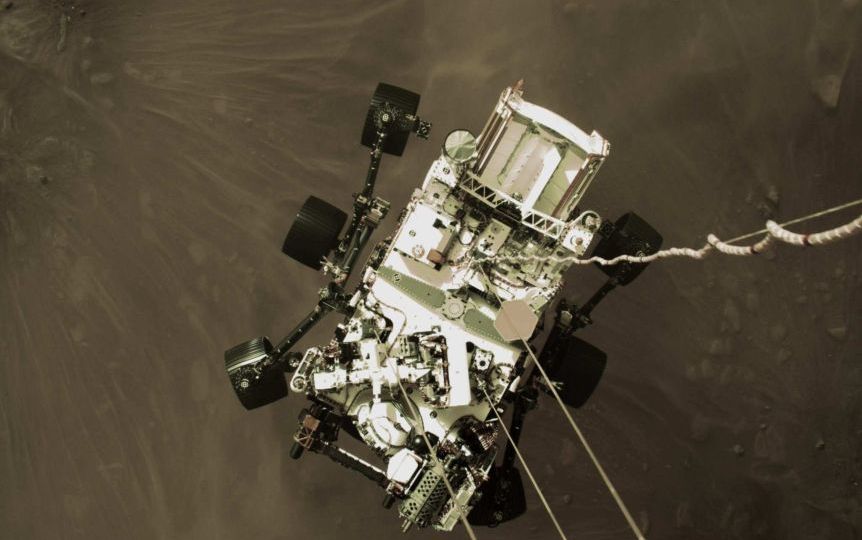 The image released by NASA showed Perseverance as viewed from its rocket cradle just before landing. Photo: Twitter/NASA Perseverance

NASA engineers say that its Perseverance rover is in “great shape” and working as planned as it continues its exploration of Mars.

Perseverance landed successfully in the Jerezo Crater on Friday as part of NASA’s Mars 2020 mission.

It touched down just 2 kilometres south-east from the ancient river delta it was targeting after a seven-month journey of nearly half a billion kilometres.

The US space agency released three new images from some of their 19 cameras that are helping with seven scientific investigations on the planet.

One of the photographs shows the rover just 2 metres off the ground as it is lowered onto to the surface of Mars.

The image was taken by the cradle that guides the rover onto the planet’s surface.

The other photographs, the first released in colour, give a close-up glimpse of Mars’s barren landscape.

“After landing, two of the Hazard Cameras (Hazcams) captured views from the front and rear of the rover, showing one of its wheels in the Martian dirt,” NASA said in a statement.

More images will be released over the next few days, NASA said, including a colour video of the landing sequence with sound.

For the next two years, Perseverance will collect samples to better understand the Red Planet.

Its first tasks will be cautious as engineers gradually commission its systems, ensuring that no hardware was damaged after Thursday’s landing.

“The Perseverance team were relieved to see the rover’s health reports, which showed everything appeared to be working as expected,” NASA said.

“In the days to come, engineers will pore over the rover’s system data, updating its software and beginning to test its various instruments.

“In the following weeks, Perseverance will test its robotic arm and take its first, short drive.

“It will be at least one or two months until Perseverance will find a flat location to drop off Ingenuity, the mini-helicopter attached to the rover’s belly.”

It is the most complex mission NASA has sent to Mars.

With four scientific objectives, Perseverance will analyse the Mars’ surface to answer the question of whether life ever existed on a planet other than Earth.

It also aims to decide if Mars could ever be inhabited by humans.

“The rover will characterise the planet’s geology and past climate and be the first mission to collect and cache Martian rock and regolith, paving the way for human exploration of the Red Planet,” NASA said.

If life ever existed on Mars, scientists believe it would have been more than 3 billion years ago when the planet had water supplies.

The last rover to reach Mars was NASA’s Curiosity in 2012, while the first fly-by of the planet was achieved by NASA’s Mariner 4 in 1965.

But this is the first time that humans will attempt to retrieve samples from another planet and bring them back to earth.

“It’s very ambitious … Perseverance is opening a new chapter, a new book, in the exploration of our solar system,” said Adam Steltzer, the chief engineer at NASA’s Jet Propulsion Laboratory.

‘I am not afraid’: The modern unknown soldier risks it all in Ukraine
Greens sign up for Labor’s looming jobs-and-skills summit as Liberals stick with boycott
Joe Biden’s $430b green victory for the environment
China cementing its Thailand ties with joint military exercises
NRL: Titans frantic to end 10-game losing streak as Manly showdown looms
AFL: Western Bulldogs cling to finals hopes after GWS thriller
The search for life on Mars: What’s in it for Earthlings?
Today's Stories