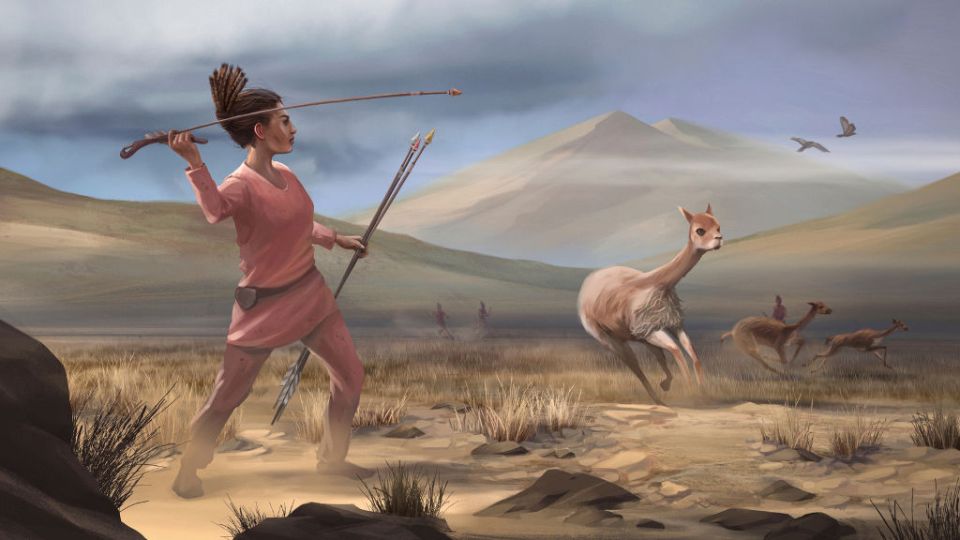 A female hunter in Peru's Andean highlands may have looked like this 9000 years ago. Image: Matthew Verdolivo/UC Davis

One of the first things we’re taught about the prehistoric world is that people lived in hunter-gather societies with strict gender roles that saw men hunting animals for food while women foraged for edible plants.

Now, a new study of a groundbreaking archaeological find has flipped those gender roles on their heads, and could see science and history books rewritten.

The study of a 9000-year-old female big-game hunter buried in South America’s Andes mountains has revealed it was surprisingly common for women living thousands of years ago to hunt.

Researchers from the University of California, Davis studied the remains of the woman and her tools unearthed by archaeologists in a high-altitude site known as Wilamaya Patjxa in Peru.

Their findings, published this week in a paper titled Female Hunters of the Early Americas in the journal Science Advances, debunk the widespread belief that only males were hunters.

Statistical analysis of prehistoric burials in North and South America that somewhere between 30 to 50 per cent of hunters in these populations were female, the study found.

This stands in contrast to recent hunter-gatherers, and even farming and capitalist societies, where hunting is a decidedly male activity with low levels of female participation, Dr Haas said.

The findings also help to discredit justifications for modern sexist inequalities, such as the gender pay gap and the barring of women from leadership roles in some religious organisations.

“Labour practices among recent hunter-gatherer societies are highly gendered, which might lead some to believe that sexist inequalities in things like pay or rank are somehow ‘natural’,” Dr Haas said.

But it’s now clear that sexual division of labour was fundamentally different – likely more equitable – in our species’ deep hunter-gatherer past.”

In 2018, a team of researchers were undertaking archaeological excavations at Wilamaya Patjxa when they uncovered a burial site that included a hunting toolkit with projectile points and animal-processing tools.

The objects accompanying people in death tend to be those that accompanied them in life, the researchers said.

Osteologist James Watson from the University of Arizona was part of the research team, and posited that the hunter was likely female.

The analysis also confirmed that the Wilamaya Patjxa female hunter as the earliest hunter burial in the Americas.

Following the discovery, researchers questioned whether the Wilamaya Patjxa woman was part of a broader pattern of female hunters or a one-off.

Looking at published records of late Pleistocene and early Holocene burials throughout North and South America, the researchers identified 429 individuals from 107 sites.

Of those, 27 individuals were associated with big-game hunting tools – 11 were female and 15 were male.

The sample was sufficient to “warrant the conclusion that female participation in early big-game hunting was likely non-trivial,” the researchers said.

The team behind the research is now looking to explore how sexual division of labour and its consequences in different times and places changed among hunter-gatherer populations in the Americas.