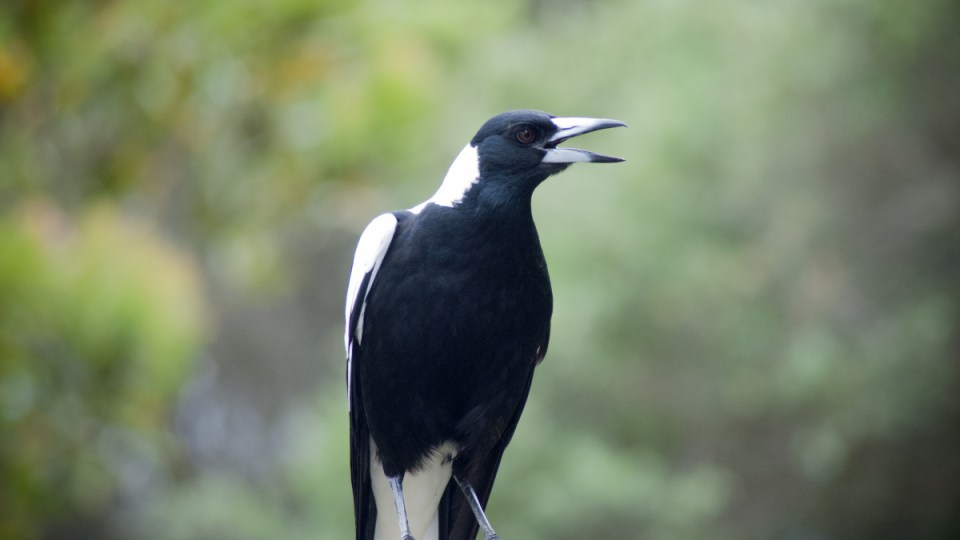 First impressions count: Your local magpie will remember your face, and may swoop if it dislikes you. Photo: Getty

Winter’s not yet over but swooping bird season is already upon us, with cyclists and pedestrians in southern parts of Australia reporting stoushes with magpies zealously guarding their nests.

Tales of mad magpies terrorising neighbourhoods abound, but contrary to public perception, just a small percentage of the native birds actually swoop at people, and they only do it for a few weeks while their chicks are nesting.

Chicks usually hatch in spring and stay in the nest guarded by their protective parents for around one month, Griffith University behavioural ecologist Darryl Jones explained.

A lot of people think that around spring every magpie becomes a vicious killer and you can’t go outside. It’s just not like that at all,” Professor Jones said.

Magpies mate for life, and it’s the male bird that defends the nest, and may swoop at passersby when chicks are young.

However, only around one in ten males in breeding magpie pairs actually “show aggression” by swooping at people, Professor Jones said.

“His role is to keep predators away from the nest area. He also keeps other magpies away,” he said.

But magpie swooping season in Australia is getting longer due to climate change.

The season now lasts from around August to November, with increasingly erratic weather and unseasonably warm winter days tricking some magpies into nesting early.

Yep, they’ve been active for a few weeks in the Barossa Valley pic.twitter.com/IcVfgC6AA8

This extended season has downsides for bird-fearing people, and also for magpies, with chicks born in winter at risk of freezing if the weather turns too cold.

“Swooping only happens when there’s chicks in the nest. If magpies are swooping now it means the chicks are already there. That means that the eggs got laid a while back … It all had to happen a lot earlier than normal,” Professor Jones said.

The weather is changing, the climate is changing so much that everything’s all over the place.”

Your local magpie knows your face

Magpies are exceptionally smart animals, and will recognise and remember the faces of the people that pass by in their local area, Professor Jones explained.

They can live for more than 20 years, and nest in the same spot their whole lives, so it’s important to stay on friendly terms with your neighbourhood magpie.

“Every single day they’re seeing the same people walking past and they see the kids growing up and all that so they know exactly what’s going on. It’s pretty amazing,” Professor Jones said.

If a magpie takes a dislike to you, they can remember your face and show aggression every time you pass, for reasons as yet unknown to researchers.

“If the magpie decides that some person walking that lives in their area is a threat for some reason, something that they have interpreted in some way as being nasty, then they will remember that person and really give them a hard time,” Professor Jones warned.

While that situation is relatively rare, and only applies to magpies that you encounter regularly, one somewhat “controversial” way to win the hostile magpie over is to make a peace offering of food, such as a scrap of meat, Professor Jones said.

This should be a last-ditch effort, though, as feeding native animals is not generally advised.

How to avoid getting swooped

It’s best to stay out of the way of swooping birds altogether for the period during which their chicks are nesting, experts say.

“That tends to be for around a month while the young are in the nest,” BirdLife Australia’s Urban Birds Program boss Dr Holly Parsons explained.

“Once they are out and mobile the swooping tends to stop.”

But if you can’t avoid areas with nesting birds, there are a few precautions you can take to protect yourselves from swooping.

Unvaccinated Pauline Hanson has COVID
‘Should have been a penalty’: Boy crash-tackled by PM gives his verdict
Man arrested at NSW school for bestiality
Concern about COVID-19 deaths in aged care
Turkey blocks Finland, Sweden NATO talks
NSW legalises voluntary assisted dying
What happens if we don’t get vaccine? Get used to living with COVID
Today's Stories

Magpie mayhem: Swooping season is getting longer. Here’s what you need to know