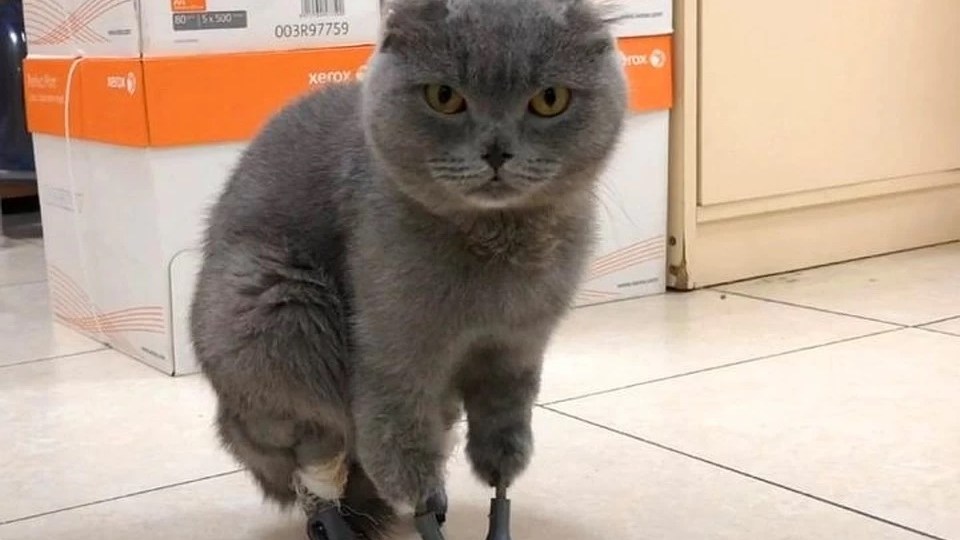 A cat believed to have run away from home was caught out too long in the Siberian sub-zero and came down with a crippling case of frostbite.

And if you think this is a sorry tail … well, she no longer has one.

Veterinarian Sergei Gorshkov had to cut it off, along with her ears and all four feet.

The cat, who has since been named Dymka (Russian for “mist”), faced a life as a whining roll-around fur ball.

There was certainly nothing to be done for the tail or the ears, but Dr Gorshkov, who runs a clinic in the city of Novokuznetsk and specialises in artificial limbs for animals, reached out to engineers at the Tomsk Polytechnic University (TPU) who created titanium-based prosthetics to replace those lost paws.

The engineers used CT scans of Dymka’s legs to create a 3D model, which was then printed using a 3D printer.

To prevent infection and avoid the cat’s immune system rejecting her new feet, they coated the ends of the titanium implants with micro-active calcium phosphate using a process called micro-arc oxidation.

This allowed the implants to more efficiently fuse into her leg bones.

The new feet resemble the shape of real paws, are flexible and have textured bottoms that allow her to walk and jump around comfortably, if not particularly elegantly.

According to a statement released by TPU, Dymka’s procedure was carried out in two phases.

The cat received her first set of titanium prosthetic paws for her front legs and then received her hind legs.

The surgeries actually took place seven months ago (July 2019) and have only now been made public.

Frostbitten animals are common in Siberia, and in extreme cases tend to be euthanised.

Dymka was saved by an unnamed woman who was aware of Dr Gorshkov’s clinic and the story of a similarly crippled cat, Ryzhiy (Ginger), who received new paws in 2016.

So Dymka is actually the second cat in the world to have all-prosthetic feet.

She has since been adopted by the woman who found her near-frozen in the snow.