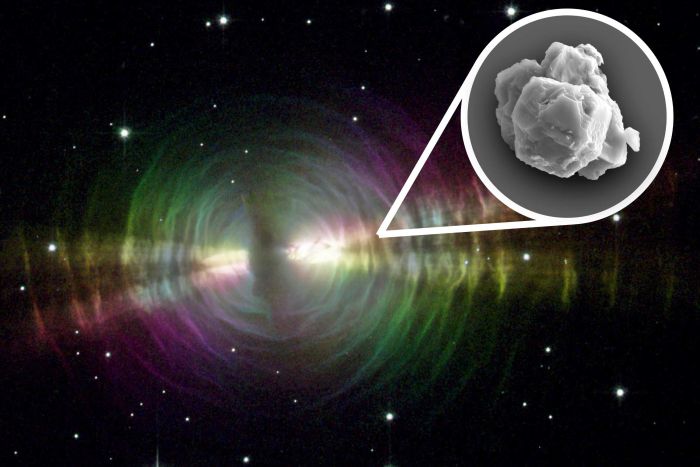 Pre-solar grains found in the Murchison meteorite may be from the clouds of dust and gas around ageing stars like the pictured Egg Nebula. Photo: NASA, W. Sparks (STScI) & R. Sahai (JPL) & inset Janaina N. Avila

A seven-billion-year-old grain of stardust – older than our solar system – has been discovered inside a meteorite by an international team of scientists.

This makes it the oldest solid material found on Earth, the researchers said. It’s even older than our Earth and the Sun, which are 4.5 and 4.6 billion years old, respectively.

And this stardust has an Australian connection.

It was extracted from the Murchison meteorite, which fell to Earth in the Victorian country town of Murchison in 1969.

“This meteorite is really a treasure trove for science,” said cosmochemist Philipp Heck, of the Field Museum in Chicago, who was the lead author of the paper published today in the Proceedings of the National Academy of Sciences.

How do you date stardust?

First of all, you have to get the stardust out of the meteorite.

The stardust is made of grains of pre-solar silicon carbide, a mineral formed before our solar system was born.

“The pre-solar grains are a tiny fraction of meteorites like Murchison, only parts per million,” Dr Heck said.

“We use a chemical recipe of different chemical re-agents, mainly acids, to dissolve away everything else, and then we extract those minerals.

“We image them, we analyse their isotopic composition to find out what type of star they came from, and then we can start our study … to find out how old they are.”

The ratios of carbon-12 to carbon-13 isotopes in these grains were a perfect match to what astronomers have observed in the clouds of dust and gas around ageing stars like the Egg Nebula and the Ring Nebula.

Instead the researchers measured how long the grains have been exposed to the cosmic rays shooting through the universe.

When a cosmic ray – a stream of high energy particles (mainly protons and alpha particles) – penetrates a pre-solar grain it occasionally splits one of its carbon atoms into fragments.

By counting all the fragments produced by the cosmic rays, and knowing how often they are produced, scientists can work out how old the stardust is.

“I’m pretty sure that Murchison contains older minerals, we just haven’t found them yet.”

The cosmic ray method doesn’t give us an absolute age of the stardust, said planetary scientist and meteorite hunter Phil Bland of Curtin University, who wasn’t involved in the research.

But it’s our best approximation so far.

Why is the Murchison meteorite so special?

It’s essentially a sedimentary rock from the gas cloud from which the solar system formed, said Dr Heck.

Murchison is really interesting because it’s not being cooked up that much in the asteroid from which it came from, hence more of these delicate grains survived than would have in an asteroid with more geological activity going on.

Because the Murchison meteorite was observed falling, pieces of it were collected shortly after the fall, reducing the risk of contamination.

The people of Murchison made almost all of the 100 kilograms of meteorite that fell to Earth available to scientists to study.

The ages of these grains of stardust isn’t only important in themselves, but also because of what they tell us about the evolution of our galaxy.

While some astronomical models assume stars form at a constant rate, Dr Heck and his colleagues’ work shows that isn’t the case.

“In order to explain our age distribution, where we have many more younger grains that we would otherwise expect, we have to explain this by this dust forming from more stars than normal,” he said.

“We came to the conclusion that about seven billion years ago there must have been an episode of enhanced star formation, probably about 50 per cent more stars formed than normal.”

Or in other words, a star-making baby boom.

“That peak in star formation about seven billion years ago … is really interesting because there’s a target that other people can chase,” Professor Bland said.

Now, he said, we need more statistics from a different meteorite.

“What I would do now is pick another sample and go through the same process and say ‘Okay, do we find that same distribution of stuff or is there something weird about this one?'”

For Dr Heck, this latest research is one of the most exciting studies he’s worked on, but he’s sure it won’t be the last.

“Murchison is so important and so rich and full of surprises,” he said.

“I really want to emphasise that without the foresight of the people of Murchison we wouldn’t have access to this wonderful sample … so this has really made a big, big difference.”