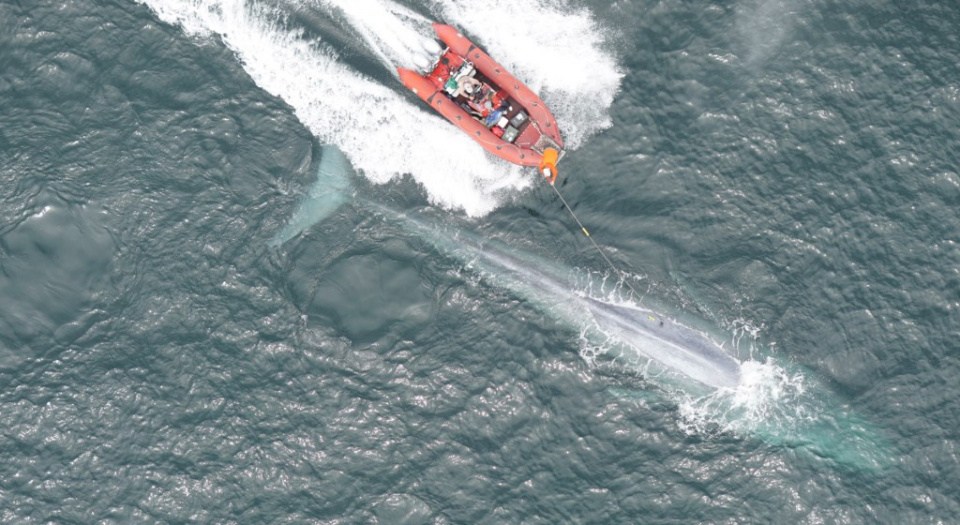 The blue whale – with a tongue as heavy as an elephant – is the largest creature ever to have lived on Earth.

Why hasn’t it continued to evolve even bigger?

Stanford researchers, who have for the first time recorded a blue whale’s heartbeat, believe it simply can’t get bigger because it is already performing at maximum capacity.

If it had to work harder than it does – as a matter of course – it would die.

The scientists too had to work hard just to make the recording.

First came the awkward, rollicking game of darts off the coast of California during which four suction cups secured a sensor-packed tag – a purpose-built electrocardiogram – near the whale’s left flipper, where it recorded the animal’s heart rate through electrodes embedded in the centre of two of the suction feet.

The tag stayed put for nine hours as the whale went about its business, diving, foraging the deep, and returning to the surface. (Each mouthful of the krill, by the way, gave the whale up to two million kilojoules of energy).

Then came the search for the encased electrocardiogram in a neon orange plastic shell the size of a lunchbox.

“I honestly thought it was a long shot because we had to get so many things right: Finding a blue whale, getting the tag in just the right location on the whale, good contact with the whale’s skin and, of course, making sure the tag is working and recording data,” said Jeremy Goldbogen, assistant professor of biology in the School of Humanities Sciences at Stanford and lead author of the paper that tells the story of the recording.

“We had no idea that this would work and we were skeptical even when we saw the initial data.

“With a very keen eye, Paul Ponganis – our collaborator from the Scripps Institution of Oceanography – found the first heart beats in the data. There were a lot of high fives and victory laps around the lab.”

According to a statement from Stanford, analysis of the data suggests that a blue whale’s heart is already working at its limit, which may explain why blue whales have never evolved to be bigger.

The data also suggest that some unusual features of the whale’s heart might help it perform at these extremes.

“Animals that are operating at physiological extremes can help us understand biological limits to size,” Dr Goldbogen said.

“They may also be particularly susceptible to changes in their environment that could affect their food supply. Therefore, these studies may have important implications for the conservation and management of endangered species like blue whales.”

The numbers were confounding

At the bottom of a foraging dive, where the whale lunged and consumed prey, the heart rate increased about 2.5 times the minimum, then slowly decreased again.

Once the whale got its fill and began to surface, the heart rate increased.

The highest heart rate – 25 to 37 beats per minutes – occurred at the surface, where the whale was breathing and restoring its oxygen levels.

The scientists say the data was intriguing because the whale’s highest heart rate almost outpaced predictions while the lowest heart rate was about 30 to 50 per cent lower than predicted.

The researchers think the surprisingly low heart rate may be explained by a stretchy aortic arch – part of the heart that moves blood out to the body – which, in the blue whale, slowly contracts to maintain some additional blood flow in between beats.

Meanwhile, the impressively high rates may depend on subtleties in the heart’s movement and shape that prevent the pressure waves of each beat from disrupting blood flow.

Looking at the big picture, the researchers think the whale’s heart is performing near its limits.

This may help explain why no animal has ever been larger than a blue whale – because the energy needs of a larger body would outpace what the heart can sustain.

Boom times: The blue whale’s heart slows to two beats a minute when foraging below