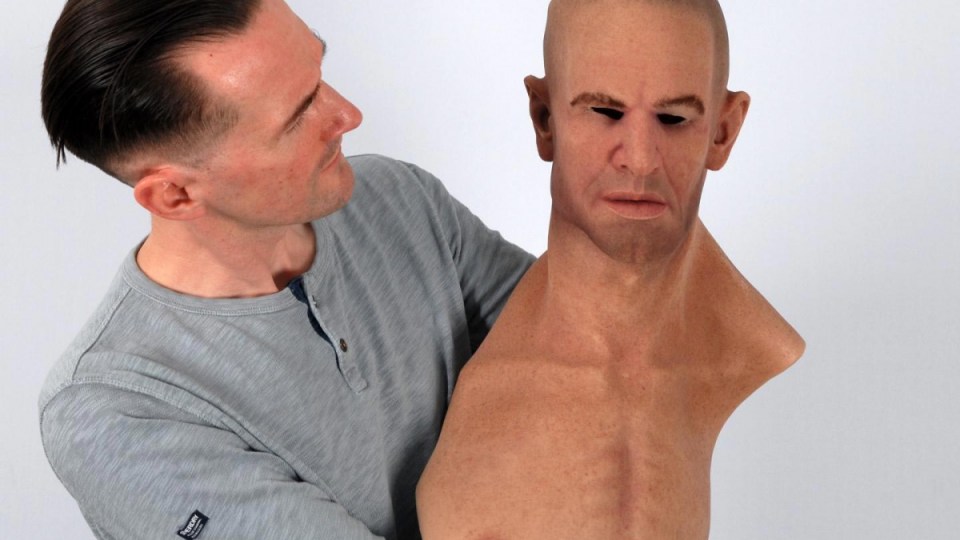 Dr Rob Jenkins holds a hyper-realistic mask of a sort that could be used for a Misson Impossible-style heist. Photo: University of York

It’s almost become a gag in the movies. A heist or a killing is made by a big shot – maybe the incorruptible mayor or maybe an untouchable gangster.

Then, when the deed is done, the perpetrator claws at his face, pulling off skin which turns out to be magical rubber and hey presto! The movie’s hero is revealed. He was wearing a mask that fooled everybody.

As if he’d get away with it in real life!

What the victims saw, in Skype calls, was a room decked out to look like Mr Le Drian’s office – and a man looking very much like Le Drian behind the desk. Except he was one of the crooks in a hyper-real Le Drian mask made from silicon.

The crooks got away with it for two years – the Aga Khan being one of the higher profile people taken in. A key reason being is that that high-end silicon masks – costing about $2000 – are so convincing. They have a new name: “hyper realistic”.

How convincing are they?

A study by the Universities of York and Kyoto recruited 120 people – 60min the UK, 60 in Japan – to look at pairs of photographs and decide which showed a normal face made of flesh and which showed a person wearing a mask.

Overall there was a 20 per cent failure rate: one-in-five choices were wrong.

The researchers suggest this “underestimates the extent to which people would struggle to tell an artificial face from the real thing outside of the lab.”

Why? Because the volunteers were aware there was a masked face in each pairing. In the real world, when people aren’t expecting to see someone in a mask – or be actively seeking one.

Dr Rob Jenkins from the Department of Psychology at the University of York, in a prepared statement said:

“In our study participants had several advantages over ordinary people in everyday life. We made it clear to participants that their task was to identify the mask in each pair of images and we showed them example masks before the test began.

“The real-world error rate is likely to be much higher because many people may not even be aware hyper-realistic masks exist and are unlikely to be looking out for them.

“The current generation of masks is very realistic indeed with most people struggling to tell an artificial face from the real thing.”

Race makes it even more difficult to choose accurately

The researchers collected data from participants from both the UK and Japan to establish any differences according to race. When asked to choose between photographs depicting faces of a different race to that of the trial participant, response times were slower and selections were five per cent less accurate.

The researchers said, “There are now dozens of criminal cases in which culprits have passed themselves off as people of a different age, race or gender, sending police investigations down the wrong path.”

Dr Jet Sanders, who worked on the study while a PhD student at the University of York, said: “Failure to detect synthetic faces may have important implications for security and crime prevention as hyper-realistic masks may allow the key characteristics of a persons’ appearance to be incorrectly identified.”

Of course, not all masks are convincing. Last month, two idiot robbers in the US were arrested with the “worst disguises ever” after trying to hide their faces with permanent marker pen. They’d been trying to break into an apartment in Carroll, Iowa.

“I’ve been chief here almost 25 years, been with the department 28 and a half years and I’ve seen a lot of things that make me laugh and weird things but this was probably the best combination of the two – strangely weird and hilariously funny all at the same time.”

Apparently what the thieves lacked in smarts they made up for in alcohol.

Mask and you shall deceive: One in five fooled by rubber-face frauds