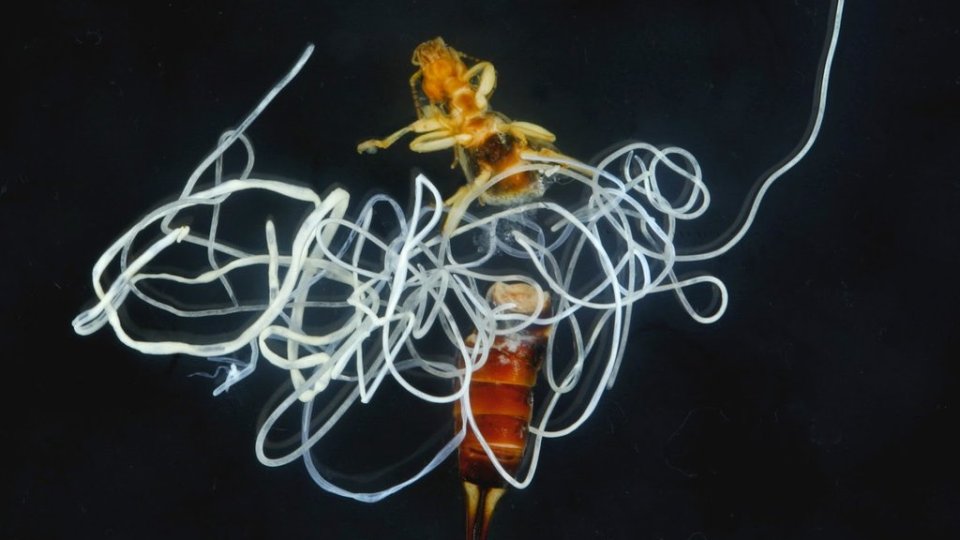 An earwig and the mermithid worm that lived inside it. Photo: Haseeb Randhawa and Kim Miller

A few years back, Ryan Herbison, then a graduate student in parasitology at the University of Otago, painstakingly collected about 1300 earwigs and more than 2500 sandhoppers from gardens and a beach in New Zealand.

Then, he dissected and examined the insides of their heads.

This macabre scavenger hunt was in search of worms that lay coiled within some of the insects.

The worms are parasites that force earwigs and sandhoppers to march into bodies of water, drowning themselves so the worms’ aquatic offspring can thrive.

“Like a back-seat driver, but a bit more sinister,” said Herbison, describing these mind-controlling parasites. “And sometimes they may just grab the steering wheel.”

Just how they do that, though, has remained a bit of a mystery.

But in a paper published on Wednesday in Proceedings of the Royal Society B, Herbison and fellow researchers reported that the parasites seemed to be manipulating the production of host proteins involved in generating energy and movement in their unfortunate hosts.

The analysis is limited, but the researchers speculated that the parasites may be affecting neuronal connections in the bugs’ brains and perhaps even interfering with memory in a way that puts the hosts at risk.

On the face of it, parasites use a variety of similar strategies.

Some make cat urine suicidally attractive to mice, which are promptly eaten so that the parasites can go through the next phase of their life cycle in the cat.

Others prompt ants to expose themselves on high tree branches, the better to be eaten by birds.

And still others cause snails to hang out in open spaces, with swollen eyestalks pulsing like neon signs, for apparently the same reason.

At the level of biochemistry, it can be difficult to determine which changes in a host result from its immune system trying to fight off the parasite and which are the parasite bringing the host under its sway.

Herbison and his colleagues suggested that if researchers could identify similar kinds of molecular changes in different hosts with different parasites, they could possibly see the strings the parasite is pulling.

Using 12 earwigs and 12 sandhoppers, the team investigated how infected insects differed from the uninfected.

They took an inventory of the proteins being manufactured by the earwigs and sandhoppers, noting which were being made in greater numbers and which had declined.

They found that while very few proteins were changed in the same way in infected individuals of both species, the jobs the proteins had were often similar.

For instance, 23 per cent of the proteins that changed in sandhoppers were involved in energy regulation and metabolism, and 39 per cent in earwigs.

This fits with the higher levels of activity observed in infected insects.

“If you make them hyperactive and erratic, there’s a much higher chance that they might find a river or a stream or a pool to fall into,” Herbison said, speculating.

Substantial numbers of proteins involved in neurons were also flagged, and one protein that declined in earwigs has been strongly linked to the formation and loss of memories.

The findings of the study, which was very small and was primarily conducted to lay the groundwork for future research, suggest that the parasites may be manipulating the host’s neural circuitry for their own gain.

Perhaps they even caused the creature to forget its innate fear of water.

“Maybe if you destroy the memory or remove the fear from them, it will be easier to get them to jump into water,” Herbison said.

He emphasised that there are few solid conclusions at the moment, but “it’s an interesting idea”.

First the worm gets in the bug’s head. Then the bug drowns itself