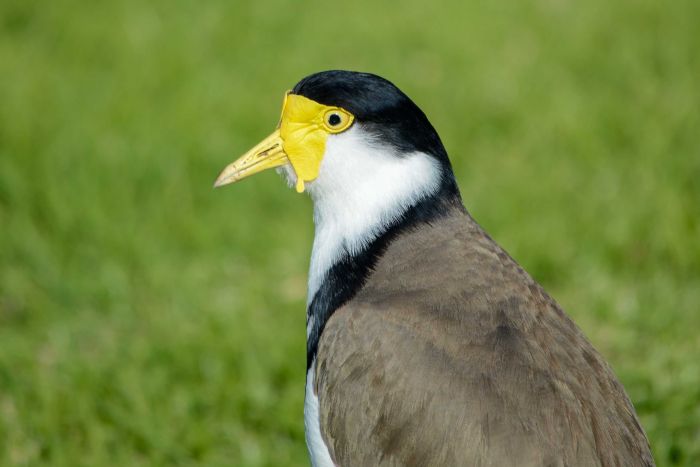 Many people will see the characteristic yellow wattle of the masked lapwing and steer clear. Photo: Kristal Kostoglou

If you grew up in suburban Australia you’ll probably have witnessed the wrath of a masked lapwing.

It screams at its enemies (humans, dogs, cats, bicycles, lawnmowers).

It stalks around football ovals. It swoops.

And, to top it off, it’s weaponised.

The masked lapwing has small spurs on its elbow-y bits, turning it into a feathered, flying, jousting monster.

But painting the masked lapwing as an evil swoopy bird is somewhat misleading.

The lapwing’s daring aerial attacks are actually displays of its pure, parental love.

The masked lapwing is Australia’s largest plover — some people call them spur-wing plovers or masked plovers.

Although plovers are technically shorebirds — and the masked lapwing can be found in coastal habitats — this plover has also carved out an urban niche for itself, on grassy lawns throughout northern, central and eastern Australia.

And it’s often these grassy lawns where humans and lapwings clash.

The main reason you might be accosted by a screaming lapwing is that they are ferocious defenders of their young, according to PhD student Kristal Kostoglou from Deakin University, who is studying the birds on Phillip Island in Victoria.

“They will swoop you and chase you away from their nest, because they’ve put so much time and energy into raising their chicks,” Ms Kostoglou told Off Track.

“Incubating the eggs is a full time job for about 30 days, and then it can take about four days for the eggs to hatch.”

Because the masked lapwing’s nest is on the ground, you might not know they’re there until you hear the first cry from an adult.

“They usually give off a high-pitched warning call, to let you know they are there, sitting on their nest,” Ms Kostoglou said.

“Then, if you get too close, they might hop off the nest and some will swoop you.

“It’s just a warning to let you know you’re in their area — they won’t usually make contact.”

“There is one display where they will puff out their chest and open up their wings as big as they can, and then slowly walk towards you,” Ms Kostoglou said.

The plover parents really just want you to move along from their nesting area.

But if you are really unlucky, and continue to get too close to their nest, they might bring out the spurs, Ms Kostoglou said.

“If they feel like they are being threatened, or if they feel they need to be aggressive, you will be able to see the spurs pop out — and they can nick you with that,” she said.

The best thing to do if you are being swooped, or visiting an area you know is home to nesting lapwings, is keep your head down and move slowly.

Running and cycling is more likely to aggravate the birds, compared to slow walking.

On Phillip Island, Kristal Kostoglou is not just studying the adult lapwings, she is also studying the chicks — but while they’re still inside their egg.

To be precise, she’s eavesdropping on the eggs — listening in to the noises coming from the chicks within the egg itself.

“I remember the first time I heard them, I heard a small call and was looking around and couldn’t see what was making it,” Ms Kostoglou said.

“The parents weren’t around so I picked up one of the eggs, and I heard the call again.

“I couldn’t believe it because it was just a chick calling from within the egg.”

Little is known about why and how bird chicks make calls from within their eggs, but Ms Kostoglou is trying to narrow it down for the masked lapwing.

To interview the eggs, she takes an egg from a nest and replaces it with a false egg so the parents don’t get stressed that they’re missing an egg.

Then, she puts the egg in a soundproof box with a high-powered microphone and records the calls coming from the chick inside.

To figure out when and why the chicks call from within the eggs Ms Kostoglou plays the egg different types of calls to see what response they have — calls from a parent and the sound of a predatory bird for example.

But if you’re most vulnerable when you’re in your egg or just hatched, why would you draw attention to yourself by calling from within your egg?

Ms Kostoglou said the chicks could be demanding things from the parents already.

“One theory is that these calls let the parents know that maybe they’re too cold, or too hot, or uncomfortable,” she said.

“The parents will hear the calls and can alter what they’re doing [on the nest] to restore the embryo back to its optimal temperature.

Another theory is that the chicks could be letting their parents know they are going to hatch soon, which could change the defensive behaviour of the incubating parents.

Or, it could be a call to let the parents know their egg needs to be rotated — to get equal warmth throughout.

And the parent lapwings do seem to respond to the calls from within the egg with a low frequency call, according to Ms Kostoglou’s research.

When they’re ready to hatch, the little chicks use their ‘egg tooth’ — a small calcified point on the tip of their beak — to break through the eggshell.

“About a day after hatching the egg tooth just falls off, and they begin to feed like normal,” Ms Kostoglou said.

“And after a while of being warmed by their parents, the chicks’ feathers become that downy beautiful fluff-ball.”

So the story of the terrifying masked lapwing is not so cut and dry.

Masked lapwings just want to do what’s best for their kids.