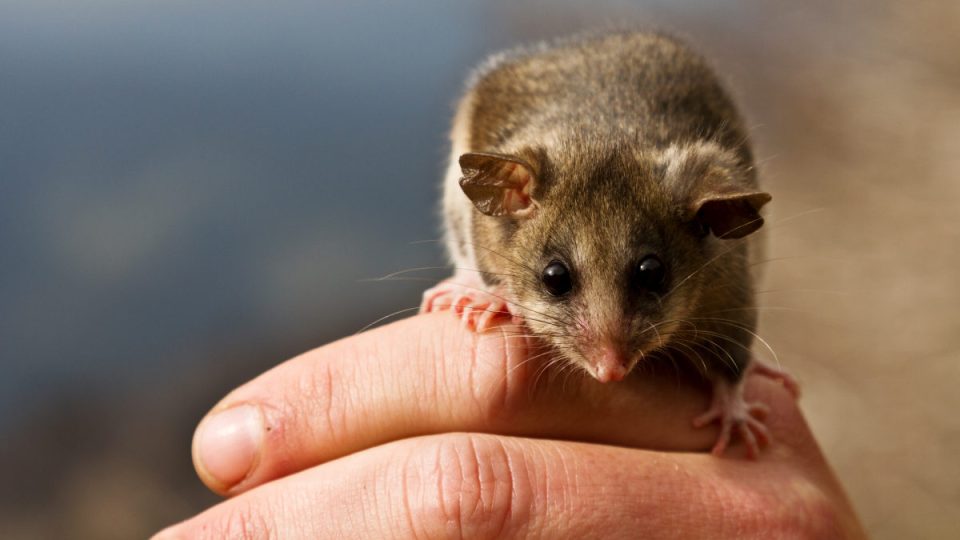 In just three isolated spots above the snowline of the highlands of Victoria and New South Wales, a tiny possum ekes out its existence.

Its life depends on the availability of food – Bogong moths and berries from the mountain plum pine – and winter snow.

One of the only Australian mammals to hibernate, the mountain pygmy possum buries itself beneath humid rock piles insulated by blankets of snow for its long winter sleep.

But with climate change pushing the snowline higher up the mountainside, it’s feared the remaining 2000 or so pygmy possums will soon run out of places to go.

So scientists have come up with a risky plan to break the possum’s hibernation cycle, help the tiny marsupial acclimatise to warmer temperatures, and then move them to suitable, temperate lowland forests.

But time is running out, according to researcher Mike Archer from the University of New South Wales.

“It could only take two years of reduced snowfall and that could wipe them out,” Professor Archer said.

“There’s still time to trial some experiments, but not a lot of time because climate change is accelerating so fast.”

Fossils of other closely related possums have all been found in warmer lowland rainforests, suggesting the pygmy possum could adapt to these habitats as well, according to research published on Monday in the journal Philosophical Transactions B.

But if they can live in warmer lowland habitats, why don’t they?

The issue is that the possums moved up into the highlands during a period of interglacial warming, but then became trapped, according to Professor Archer.

“These animals followed the rainforest as it moved up the flanks of the Great Dividing Range, then climate deteriorated into an ice age and marooned these animals on the mountain tops,” he said.

Rather than needing to hibernate, the mountain pygmy possum has developed this strategy more recently to deal with the cold, snowy winters, the researchers believe.

The relocation project plans to keep their animals in warm conditions year round to stop them hibernating.

And they’ve got evidence that it will work.

“We already know that it works – people have kept them as pets in the lowlands,” Professor Archer said.

“[Researcher] Hailey Bates has already found plenty of records where people have kept them in the lowlands and they didn’t need to hibernate.”

But others like pygmy possum expert Andrew Weeks from the Threatened Species Hub, aren’t convinced by the plan.

“I’m pretty sceptical. I think in terms of conservation it’s pushing the boundaries a little bit,” said Dr Weeks from University of Melbourne.

“That’s not to say you wouldn’t ever implement such a strategy, but it’s a high-risk strategy.”

All other species of this possum that lived in the lowlands have gone extinct, Dr Weeks pointed out.

If the pygmy possum was able to live at lower altitudes, it would have migrated there naturally, he said.

He said the money could be better spent on proven conservation strategies like controlling foxes and cats and restoring habitat in the possums’ current range.

“We have to be a lot bolder in the way we undertake conservation and we need take risks,” Dr Weeks said.

“But they need to be measured risks – every dollar we spend on this is a dollar taken away from some other conservation effort.”

The first mammal in the world to go extinct due to climate change was the Bramble Cay melomys, a small native rodent last seen on an island in the Great Barrier Reef in 2009.

In their attempt to save the pygmy possum from the same fate, the researchers have moved two breeding pairs to Secret Creek Sanctuary at Lithgow.

Along with several local and international organisations, they’re raising money to build a breeding facility there, which they hope to have up and running with around 25 animals by next year.

And they’ve got backing to take some animals from the population on Mount Kosciuszko.

The other problem facing the mountain pygmy possum is the apparent collapse of Bogong moths, which have suffered huge declines over the past two years.

The possums traditionally wake up in spring, and gorge on the highland moths while raising their young.

But again, the researchers don’t believe that Bogong moths are essential to the possums’ survival, Professor Archer said.

“At the moment they’re eating Bogong moths because that’s the insect up there, but there are protein-rich insects in the lowlands,” he said.

Last week the Morrison government launched a review of the Environment Protection and Biodiversity Conservation Act (EPBC), which many fear is an attempt to water down existing environmental protections.

In response, more than 240 scientists wrote to the Prime Minister warning him that Australia faces an extinction crisis, and that without strong action around 17 animals could go extinct in the next 20 years.

If their controversial plan works, the researchers hope the mountain pygmy possum won’t be one of them.

“If we don’t do this, what’s the alternative? We bid them goodbye and wish them well?” Professor Archer said.

“It’s our moral requirement that, having made this mess, we need to put all the possible solutions on the table.”