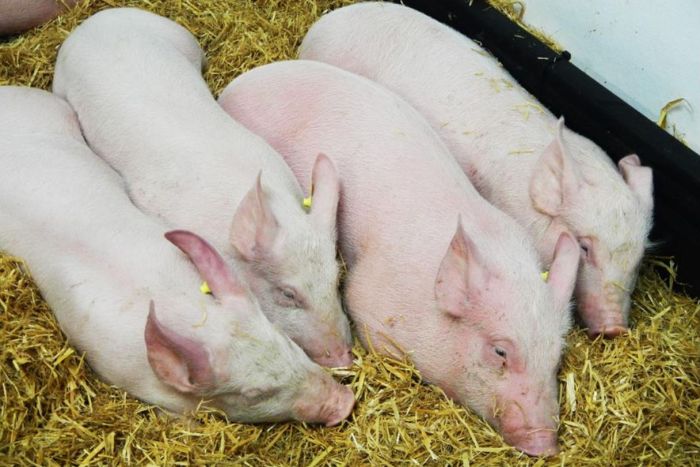 Pigs that suffer from ASF, like these ones, have flu-like symptoms, as well as reddening of the ears and snout. Photo: ABC/The Pirbright Institute

Scientists are racing to develop a vaccine for African swine fever, a disease that has killed an estimated 200 million pigs, to try to halt its spread across the globe.

The virus was first described in the early 20th century after an outbreak in Kenya, but for decades commercial companies had no interest in developing a vaccine because they did not see much of a market in poor African countries.

Then pigs started to die from the disease in Europe and further afield.

“The major impetus for a vaccine development came last year, when the virus spread to China and other countries in Asia,” said Dr Linda Dixon from the Pirbright Institute in Britain.

“Then all of a sudden, everyone wanted a vaccine immediately.

“But, of course, it takes years of research and investment to get a vaccine that is ready to use commercially.”

Why is it so hard to create a vaccine?

ASF is very large and complex – it is about 20 times the size of other viruses that have effective vaccines, and the traditional methods of developing one have proven ineffective.

“It needs to protect pigs from subsequent infection in the field,” Dr Williams said.

“Following inoculation the vaccine shouldn’t make them sick – ideally it shouldn’t result in shedding of the vaccine through saliva or faeces and spread to other pigs.

“It should also be diva-compatible, which means we should be able to differentiate between vaccinated and naturally infected animals, which is really important for trade purposes.”

Dr Dixon is part of a team of researchers at the Pirbright Institute working on vaccine development, and are finalising candidate vaccines that might be taken forward to testing.

What is needed, according to Dr Dixon, is what is known as a live-attenuated vaccine.

“That is a vaccine that is based on the virus itself, so that it is weakened, such that it doesn’t cause disease in the infected pig, but it replicates enough to induce an immune response that can control the infection,” she said.

“There is still a lot of work to be done, because obviously there is a lot of safety testing to be done.

“The vaccine candidate has to be prepared by a commercial company, and the methods for doing that aren’t yet established.

“There is still quite a lot of work to be done to take a vaccine that shows promise in the lab, to being a commercial vaccine that is licensed by regulatory authorities.”

How far away is a commercially available vaccine?

About 10-15 groups around the world are working on vaccine development, with more and more funding being allocated to research.

The Chinese government reportedly committed a further $15 million towards development, while researchers in Vietnam claim to be closing in on an effective vaccine.

Despite all the global efforts being put towards vaccine development, Dr Williams said an effective product is still a few years away.

“I think if we had a live-attenuated vaccine ready to go today … it would still take a number of years to get it fully licenced,” he said.

“In China, that may be different – there is a great impetus to have a working vaccine there, but those sort of [regulatory] things may get done faster there.

Dr Dixon thinks China will likely be the first country to release a vaccine.

“It could be that for the first vaccine their regulatory authorities might accept a vaccine that is perhaps not finally what would be the ideal vaccine,” she said.

“[It might have] some features that are not 100 per cent of what they would like to have, but it is still good enough to control the disease.”

Can authorities stop the spread?

With an effective vaccine still a few years away at least, authorities are concentrating on controlling the spread of the virus by tightening biosecurity.

Australia has boosted its biosecurity measures at airports around the country, even turning around a Vietnamese traveller trying to enter Australia with 4.6 kilograms of pork products in her luggage.

While a vaccine would certainly make the disease easier to control, Dr Dixon said African swine could be controlled without it.

“It shouldn’t be that difficult to control – because it is not efficiently spread by air, it doesn’t really have an insect vector,” she said.

“You should be able to control the disease using good biosecurity measures.

“African swine fever was introduced in Spain and Portugal in 1957, and although it was present right through until the 1990s, it was eventually controlled without a vaccine.”