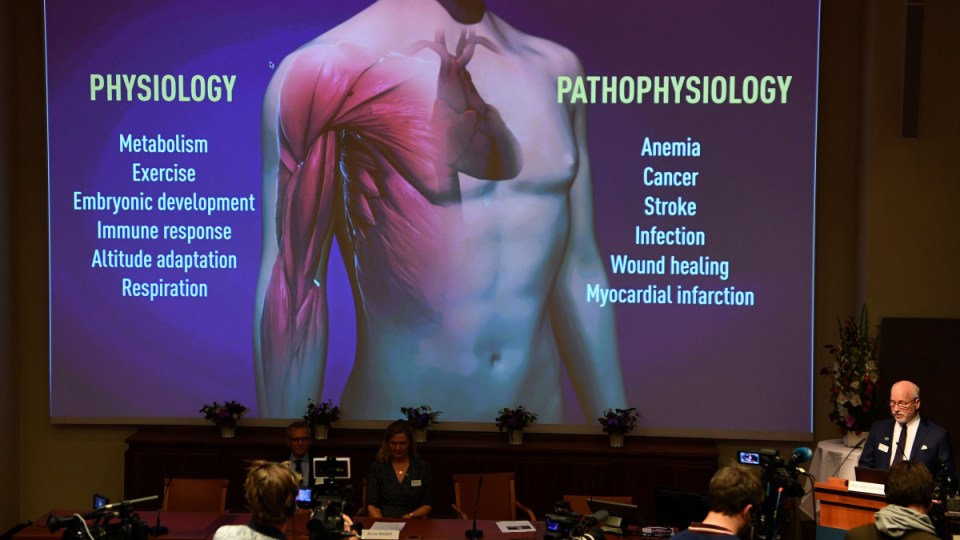 A Nobel Assembly member explains the research of the 2019 Nobel Prize winners in Physiology or Medicine at Stockholm, Sweden on Monday. Photo: AFP/Getty

Two scientists from the United States and one from Britain won the 2019 Nobel Prize for medicine for finding how cells adapt to fluctuating oxygen levels, paving the way for new strategies to fight diseases such as anaemia and cancer.

“The seminal discoveries by this year’s Nobel laureates revealed the mechanism for one of life’s most essential adaptive processes,” the Nobel Assembly at Sweden’s Karolinska Institute said in a statement on awarding the prize of nine million kronor ($1.35 million).

Their research established the basis for the understanding of how oxygen levels affect cellular metabolism and physiological functions, the institute said.

Randall Johnson, member of the Nobel Assembly, on the discovery awarded this year’s #NobelPrize in Physiology or Medicine. pic.twitter.com/pGYIFkv69X

“Oxygen sensing is central to a large number of diseases,” it said.

“Intense ongoing efforts in academic laboratories and pharmaceutical companies are now focused on developing drugs that can interfere with different disease states by either activating, or blocking, the oxygen-sensing machinery.”

Medicine is the first of the Nobel Prizes awarded each year.

The prizes for achievements in science, peace and literature have been awarded since 1901 and were created in the will of dynamite inventor and businessman Alfred Nobel.

Nobel medicine laureates have included scientific greats such as Alexander Fleming, the discoverer of penicillin, and Karl Landsteiner, who identified separate blood types and so enabled safe transfusions to be widely introduced.

In 2018, American James Allison and Japanese Tasuku Honjo won the prize for discoveries about how to harness the immune system in cancer therapies.

Melania Trump: Bombshell revelations about what she did during US Capitol riot
Retailer pauses facial recognition tech trial after privacy complaint
Donald Trump grabbed at steering wheel in bid to get to Capitol riot
Two charged over US migrant truck deaths
Governor-General admits ‘mistake’ over Insta ad endorsement
Hundreds of hives destroyed in bee mite eradication effort
Our tastes change with adulthood, pregnancy, medication and more. Here’s why
Today's Stories