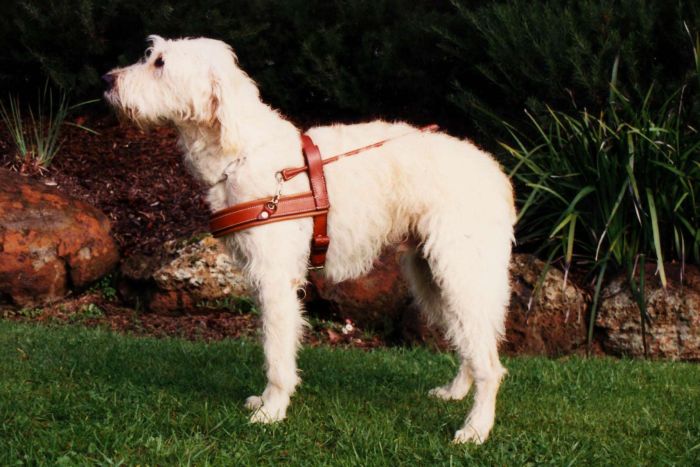 Born in 1989, Sultan was the first ever labradoodle, serving as a guide dog rather than a designer pet. Photo: Photo: Guide Dogs Victoria

Thirty years ago, Wally Conron was asked to breed a non-shedding guide dog. Looking back, he worries that he created a monster.

“I bred the labradoodle for a blind lady whose husband was allergic to dog hair,” he says.

“Why people are breeding them today, I haven’t got a clue.”

In the 1980s, Mr Conron worked as the breeding manager for the Royal Guide Dogs Association of Australia, now known as Guide Dogs Victoria.

Most of the time, that meant breeding Labrador pups. But one day he received a letter from a blind lady in Hawaii whose husband was allergic to long-haired dogs.

“She wanted to know if we could come up with a dog that she could use as a guide dog and her husband wouldn’t be allergic to,” he said.

At the time, Australia and Hawaii had similar quarantine provisions so a partnership had been struck up between Guide Dogs Victoria and Eye of the Pacific, a Hawaii-based organisation for the vision impaired.

Initially, Mr Conron saw the task as fairly straightforward – “the standard poodle would do the job”.

But after trialling 33 different standard poodles, Mr Conron came to the conclusion that the poodle didn’t have the right temperament to be a successful guide dog.

All the while, Mr Conron says he was very aware of the “poor lady sitting in Hawaii with no guide dog”.

So after three years of attempting to find a solution, Mr Conron came up with the idea of a brand new crossbreed – “a dog with the working ability of the Labrador and the coat of the poodle”.

Firstly Mr Conron needed to find a suitable standard poodle to breed with one of the Guide Dogs Victoria Labrador bitches. He didn’t have to look too far afield.

“Our boss had one, a standard poodle, that as far as I knew it had no hereditary problems, so I used it,” Mr Conron says.

So one afternoon in 1989, Mr Conron brought Brandy, a Labrador bitch, over to John Gosling’s house to meet Harley.

Mr Conron was thrilled, although still slightly apprehensive, unsure if any of the three pups would be suitable guide dogs.

“It was great, but I still had worries. Were they non-allergic? Were they going to be suitable?” Mr Conron said.

Coat clippings and saliva from each of the pups were sent to Hawaii for testing and just one of the pups came back compatible.

That pup was named Sultan.

Temperamentally, Sultan was considered the best of the three labradoodle pups, so Mr Conron says he was trained up and sent off to Hawaii to begin work as the world’s first labradoodle guide dog.

A gimmick that caught on

With Sultan in Hawaii, Mr Conron says he still had two other labradoodle pups that would make great guide dogs – except no one wanted them.

Despite a six-month wait for a Labrador guide dog, Mr Conron says not one family was willing to take one of the Labrador crosses.

“I said ‘Can you get onto the media and tell them that we’ve bred a special breed? A breed called the labradoodle – it’s non-allergenic’,” Mr Conron said.

So it was then that the name labradoodle was invented: A desperate attempt to get guide dog clients on board with this new crossbreed.

“It was a gimmick. No one wanted a crossbreed but everybody wanted a labradoodle. Same dog, different name.”

And quickly it became apparent that the demand for the labradoodle went well beyond the vision-impaired community. Guide Dogs Victoria became inundated with labradoodle inquiries from all over the world.

“I could not visualise the publicity that a crossbred dog would get,” Mr Conron said.

“Cars would stop and people would get out of the car and say to me, ‘Excuse me, what sort of dog is that?’ I’d say ‘it’s a labradoodle!'”

The reason the labradoodle took off was fairly straightforward, according to Jessica Hekman from the Broad Institute in Boston, who researches dog behaviour and genetics.

“A lot of the way that we think about dogs is the story that we can tell about the dogs that we’ve got,” Dr Hekman said.

“Having the story, ‘Well this dog is just a mix of a couple of different things’ – it didn’t used to be a good story.

“So when you start attaching cool names, then it starts turning into a new, cool story.”

It was among the media hype that Mr Conron says his feelings about the labradoodle began to change.

“I realised what I had done within a matter of days.”

As a professional dog breeder, Mr Conron says his biggest concern was always about breeding the healthiest pups, but he believes that didn’t end up being the case for a lot of labradoodle breeders “who got on the bandwagon”.

“I realised the reason for these unethical, ruthless people [was] to breed these dogs and sell them for big bucks,” Mr Conron said.

The popularity of the labradoodle was overwhelming and Mr Conron became increasingly concerned about the quality of the breeding process being adopted. Thirty years on it still haunts him.

“I opened a Pandora’s box and released a Frankenstein’s monster,” he said.

“When I’m out and I see these labradoodles I can’t help myself, I go over them in my mind.

“I look at it thinking, does it have hip dysplasia? Has it got elbow problems? Any other problems I can see?

“I find that the biggest majority are either crazy or have a hereditary problem. I do see some damn nice labradoodles, but they’re few and far between.”

Mr Gosling was equally as surprised by the uptake of the breed but saw it as a positive turn of events.

“We could never have thought it was going to become so prolific,” he said.

“Our thinking was particularly toward guide dogs and vision-impaired people who had a difficulty with an allergy, but it’s gone way beyond that.

“It’s actually turned out to be something, in my opinion, quite fantastic.

“I don’t have regrets at all.”

Dr Hekman says labradoodles are just one of many dog breeds with runaway popularity.

“My feeling is while there are certainly a fair number of people crossing poodles to anything and everything – and maybe not always in the wisest way – there were always people out there trying to meet the insatiable demand that we have for dogs,” she said.

Even though Mr Conron still regrets creating the labradoodle, his science experiment back in the late ’80s led to numerous successful labradoodle guide dogs, as well as kickstarting the entire “oodle” trend.

The origins of the cavoodle, groodle, jackapoo, schnoodle, golden doodle (the list of poodle crosses really is endless) all stemmed back to the birth of Sultan and his labradoodle siblings.

Additionally, the original labradoodle guide dog, Sultan, served as a highly regarded guide dog – so much so that when he was due for retirement his owner struggled to decide who should adopt him.

“The challenge that the client had was that there were so many people who knew Sultan, they all wanted him when he retired,” Mr Gosling said.

He had ongoing contact with Sultan, doing annual check-ups in Hawaii. So when it came time to retire, Sultan’s owner approached him and asked if he would like this sought-after dog.

Sultan was flown from Hawaii to Melbourne and spent the last three years of his life with Mr Gosling.

“He came to work with me back at Guide Dogs Victoria where he started,” he said.

And then when Sultan died it only made sense to bury him in Mr Gosling’s backyard alongside his standard poodle dad, Harley.

Now in the backyard of this suburban Melbourne home just between the Hills Hoist and the boundary fence, rests the origins of the labradoodle.

“You were here for a reason,” he says, as if speaking directly to the dogs. “It was a reason for many people to have good guide dogs.

“You did what you had to do and you did your best at that.”