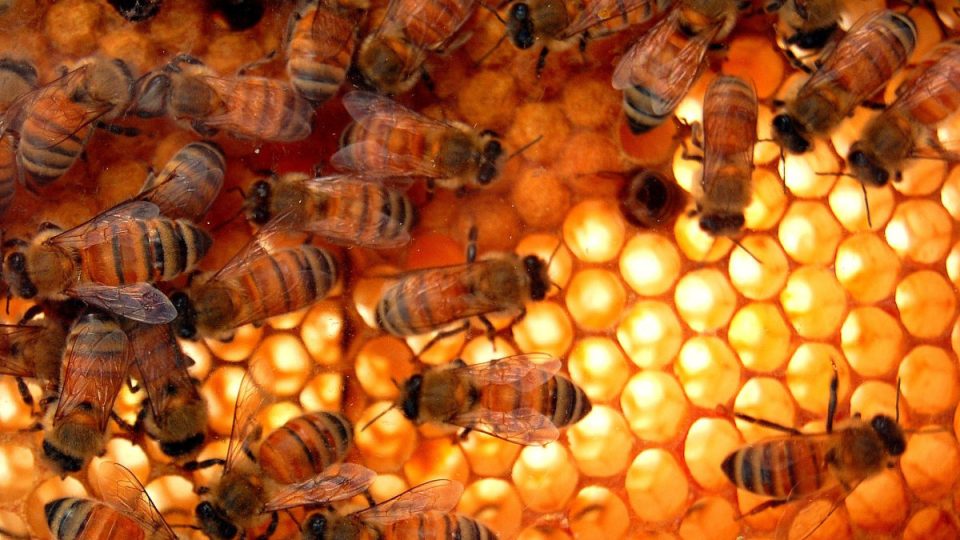 Australia's bees are at risk, thanks to a small parasite that has crippled honey bees across the world. Photo: Getty

Beyond a chain link fence littered with abandoned trolleys, seagulls swoop and ships the size of small cities stacked high with containers dock at Port Melbourne.

It’s here that Joe Riordan performs his six-weekly ritual: Peering into a sentinel bee hive for signs of danger.

That danger is the varroa mite: A tiny parasite that could threaten our beekeeping industry and the farmers that rely on them.

Australia is the last inhabited continent on Earth that is free of the mite, which has crippled honey bees everywhere it has taken hold.

For apiarists like Mr Riordan, and urban and commercial beekeepers, the threat is real – but they’re preparing to meet it head on.

‘The risk is getting higher and higher’

It was just over a year ago that Australia’s bee biosecurity program was set on red alert: A ship captain arriving from the United States reported dead bees on board.

Mr Riordan and the team at Agriculture Victoria sprang into action, and found varroa mite inside a crate.

“This is the day, it’s happened,” he recalls.

Fortunately, the threat was contained. Mr Riordan felt a “significant feeling of relief”.

It also significantly reduces their ability to pollinate crops.

For 60 years now, the mite has hitched its way through Asia, Europe and the US. It arrived in New Zealand in 2000.

It isn’t in Australia – yet.

But Mr Riordan says “holding off something the size of a match head” isn’t easy – especially “given we have increased container movement in Australia”.

“The risk is just getting higher and higher every day,” he says.

And there’s good reason Mr Riordan and the team are acting urgently.

In Australia, one in three mouthfuls of food benefit from honey bee pollination and their services are valued at $8 billion per year.

Some crops – like almonds, blueberries, avocados and apples – are completely dependent on honey bee pollination.

Where varroa has spread in other countries, pollination fees doubled as beekeepers’ costs increased to manage treatments and losses.

Beekeepers on the frontline

Mr Riordan enlisted beekeepers from around Victoria to help test all the hives for Agriculture Victoria’s emergency response team.

“There’s a sense of, ‘well look, I’m a beekeeper, what I want to do is help. I’m not going to stand back and hope it’s going to work, I want to be part of the team that actually beats it’,” he says.

If varroa mite gets in through the ports, it’s urban beekeepers like Nic Dowse in Melbourne who might be the first to be affected.

Mr Dowse sees this time as “the last continental-scale golden age of beekeeping on Earth”.

It’s a time when beekeepers from overseas come to Australia to see what it’s like to work without varroa.

He stresses the importance of beekeepers registering their hive, and joining a local club.

“There are a lot that aren’t registered … and don’t know how to identify what the diseases are,” Mr Dowse says.

In California, his friends call these beekeepers “varroa bombs” because of the danger they put neighbouring hives in.

He’s starting to organise international beekeeper friends to give talks on handling and preparing for varroa.

If varroa mite breaks the sentinel hives in Port Melbourne, it’ll jump bee-to-bee, hive-to-hive, out of the city and into the country – where the commercial beekeepers and thousands of hives are.

Ian Cane is a third-generation commercial beekeeper in Gippsland who says his bees are genetically selected to be hygienic.

“So if we do get varroa … they’ll see varroa as an intruder and clean it out,” he says.

Each season, he transports his bees 800 kilometres north-west to the Mallee region to pollinate almonds.

“The farm-gate value of almonds is approaching $1 billion. No bees, no almonds,” he says.

“We just don’t have anything that comes near these forests for the bulk of the year to build healthy bees.”

For Mr Cane, the threat of varroa is compounded by the deteriorating state of the forests in his area. Clear-fell logging is having “a devastating effect” on commercial beekeepers.

Mr Cane is not opposed to logging generally but the ability for clear-fell sites to recover is being exacerbated by climate change and drought.

Forty thousand kilometres is the same distance as circling planet Earth. That is how far he is travelling to keep his bees healthy.

“It’s like we’re carting hay to the bees but it’s coming from everywhere,” he says.

Jody Gerdts, another beekeeper, is racing to get ahead through research.

A fourth-generation beekeeper and bee scientist living in central Victoria, she is currently back in her native US to learn how to breed for varroa-tolerant bees.

“People either learned how to manage or they got out of the business, whether through going bankrupt or they just decided it’s time to leave,” she says of the US.

“I can see a similar thing happening here in Australia.”

“It can spread fast because it only takes one mite to reproduce in a colony,” she says.

“Year two and three are going to be devastating because that’s how long it takes for a colony to really crash.

“In year five, pollination will suffer drastically as it becomes harder to source enough healthy hives.”

She says organising local groups to breed bees that are adapted to varroa, as well as climatic conditions for even more resilience, could help.

“We can short-circuit the time it takes to build varroa mite-tolerant bees here in Australia,” she says.

Within the hives that all these beekeepers and researchers are working in partnership to protect, the bees themselves prepare for the new season and the next generation.

Guard bees defend the entrance to the hive. Forager bees bring in pollen. The processor bees make and store honey. Every aspect of this collective works together so that the bee superorganism lives on.

Back at the port, Mr Riordan closes up the sentinel hive. The sticky mats are clear: No varroa.

When the biosecurity system was last set off, it was miserably cold and Mr Riordan was glad for it – bees don’t like flying in that weather.

He and the team are now preparing for a worst-case scenario – if varroa comes in high summer, the bees will be flying fast and far.

The threat of varroa mite is real. But these Australian beekeepers are ready to face it