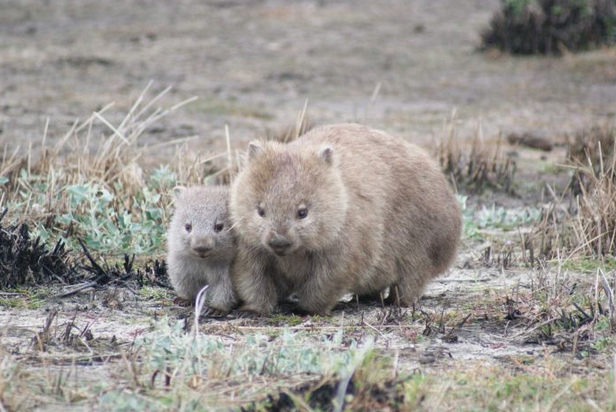 Contrary to popular belief, wombats have better thing to do, like raising their young, than patting their scat into cubes. Photo: University of Tasmania

Researchers have finally discovered why wombats’ faeces is cube shaped, and it is not what they initially thought.

When a group of University of Tasmania researchers sliced open a wombat corpse, they were surprised.

For years, scientists believed the cubes were formed “at the point of exit”.

But a more recent discovery reveals the animals’ intestines have more to do with the unusual shape of their faeces.

Senior lecturer in wildlife ecology Scott Carver was dissecting wombats to study mange disease when he and his research team made the discovery.

“It was quite incredible,” Mr Carver said. “We found that their cubed faeces actually goes back about a metre inside their intestines from their anus, which is really quite far inside their bodies,” he said.

Using a microscope, Mr Carver said his team discovered the animals’ muscle thickness around the circumference of their colons “varies three-fold”.

“That probably sharpens the corners of the faeces as it descends down their intestines,” he said.

“Grass takes about a week to get through a wombat’s intestine whereas our intestine is about two thirds the length that of a wombat, and it takes us about 48 hours,” he said.

He said wombat scat was also much drier than human faeces.

The square-shaped scat has long baffled bushwalkers and scientists.

Mr Carver said the discovery dispelled many myths, including that wombats’ pubic bones squeeze their faeces into square packages, that the animals had a square-shaped sphincter and — his personal favourite — that the animals defecate and then pat the scat into shape.

He said not only was the shape of wombat faeces unique to the animal kingdom, it was also “deposited in prominent place to communicate with each other”.

The amusing find has earned the researchers the Ig Nobel prize — an international award for a study that makes people both laugh and think.

The prize has been awarded since 1991, with only 10 awards handed out annually from a pool of about 9,000 nominees.

Mr Carver accepted the award at Harvard University in Boston on behalf of his team.

“It’s a comical and tremendous honour to receive one of these awards,” he said.