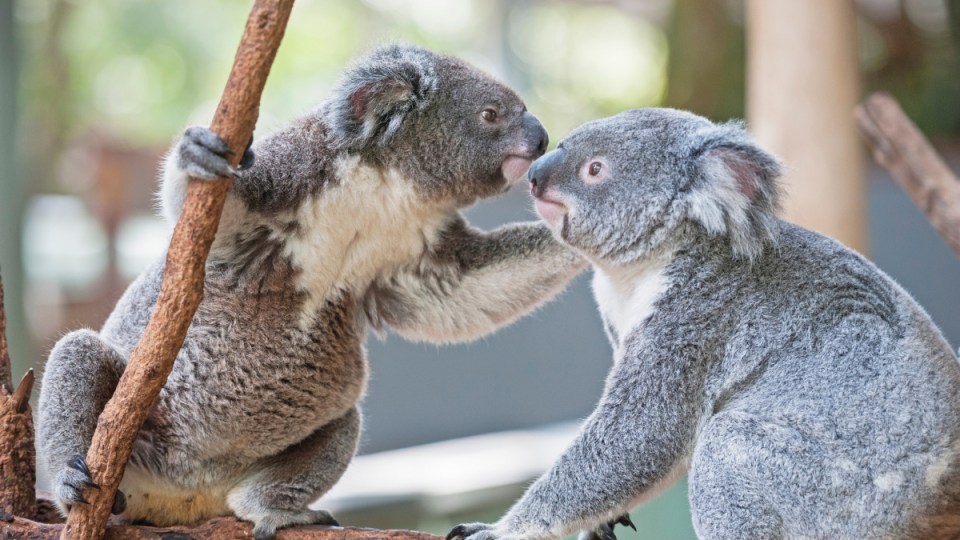 "Is that poo on your breath?" "Yes, but only because I'm planning to eat a different kind of tree." Photo: Getty

An innovative experiment from the University of Queensland suggests that poo transplants could save the koala from habitat loss.

The transplants appear to expand the microbiomes – gut bacteria – in individual koalas, allowing them to eat a wider range of eucalypt species.

UQ School of Chemistry and Molecular Biosciences Dr Michaela Blyton says she was inspired to conduct the research after a devastating – and widely publicised – drop in the koala population at Cape Otway in Victoria in 2013.

The problem with loving one kind of food

In their paper, published in the journal Animal Microbiome, the researchers neatly lay out the problem:

“The koala is a specialised folivore (leaf eater) of the tree genus Eucalyptus, with individual koalas feeding on between one and 10 species, making it one of the most specialised mammalian herbivores.

“Koala diet choice is strongly influenced by nutritional content (particularly protein) and by plant secondary chemistry, which influence the digestibility and toxicity of the diet.

“On Cape Otway, Australia, in 2013, the population density of koalas was such that they over-browsed their preferred food tree, manna gum, causing widespread defoliation and tree mortality.”

Starving to death, surrounded by food

This, in turn, led to more than 70 per cent of the koalas dying due to starvation and compassionate euthanasia, and prompted ongoing intervention by wildlife authorities that involved translocation of more than 400 healthy koalas in 2015.

Critically, even though koalas were starving, most did not feed on adjacent stands of another abundant Eucalyptus species, messmate.

However, there were a small number of koalas that were resident in the messmate forest and for which messmate was the preferred diet.

As the researchers note: “Numerous studies have shown that the GI (gastrointestinal) microbiome can be shaped by host diet and that in some instances the GI microbiome can rapidly adapt to short-term diet changes.

Some guts naturally adapt to new diets, others don’t

“However, in hindgut-fermenting herbivores… the effect of diet on GI microbiome composition may be more restricted.

“We have shown that the koala GI microbiome appears to be relatively unresponsive to dietary changes over a period of a month. This is likely to exceed the period of time that an animal would form a behavioural aversion to an inappropriate food source in the wild.”

In other words, in the time it would take a koala’s gut to adapt to a new diet – if it were to happen without further intervention – the animals would be turned off even trying the new food.

Dr Blyton and Dr Ben Moore at Western Sydney University wondered if the microbes present in koalas’ guts were limiting which species they could eat, could they assist them to expand their diet with faecal inoculations?

The team caught wild koalas that only ate manna gum and kept them in temporary captivity at the Cape Otway Conservation Ecology Centre.

“We collected poo from radio-collared wild koalas that ate messmate, concentrated the micro-organisms in the poo, packaged it into acid-resistant capsules and gave them to the captive koalas,” Dr Blyton said.

“We then monitored how much messmate the koalas were willing to eat over an 18-day period and assessed how the microbiomes changed after the inoculations, comparing their diets to those of control koalas that received manna gum microbes.”

The researchers found that the faecal inoculations changed the koalas’ microbiomes, allowing them to eat messmate.

In less than three weeks, they tolerated the new food

They write: “The GI microbiomes of the treatment koalas in our experiment became more similar to those of messmate koalas over the course of the study and appeared to stabilise between nine and eighteen days after the completion of the inoculations.”

The implication is that faecal transplants would allow koalas to widen their range – adapt physically and in terms of their diet – in future instances of over-grazing or loss of habitat because of a local calamity.

“This study provides a proof of concept for the use of encapsulated faecal material to successfully introduce and establish new microbes in koalas’ guts,” said Dr Blyton.

“In future, capsules could be used to adjust koalas’ microbiomes prior to moving them to safer or more abundant environments, and as probiotics during and after antibiotic treatment.”

Poo transplants may save koalas from starvation, a new experiment finds