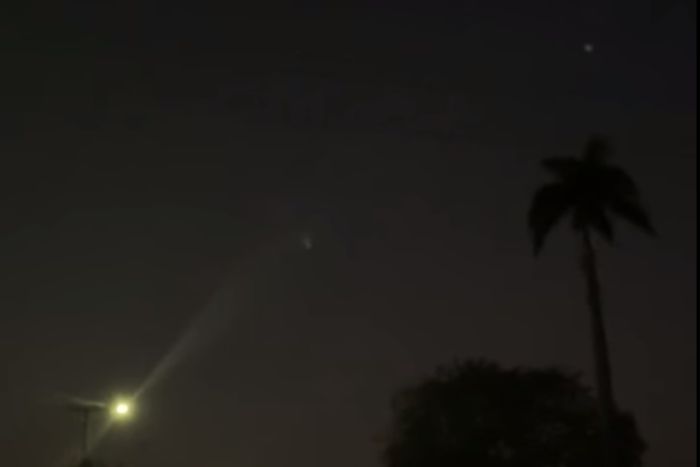 The bright light (directly above the palm tree) was also spotted from near Kalkarindji, NT. Photo: Kirby Noonan

An astronomer has explained a strange, bright light that appeared in skies over the Northern Territory and Queensland on Monday night, leaving hundreds of people mystified.

Shauna Royes spotted the light over the Julia Creek caravan park in remote north-west Queensland about 7.30pm on Monday night and put a call out to the ABC North West Facebook page to figure out what it was.

“We were actually at the caravan park having a bush dinner for not-for-profit organisations, so there was about 160 people, and one of the tourists looked up and said, ‘look’,” the McKinlay Shire councillor said.

“It was quite a bright, unusual light with a tail on it. It was travelling north-east and we watched it for probably two or three minutes before it faded out.

“We had no idea what it was. It was really unusual.”

Plenty of people captured photographs and videos of the mysterious light, sharing photos from Rockhampton in central Queensland to Atherton in the state’s far north.

Jacob Blunt saw the light near Cape Crawford in the Northern Territory and captured a video.

“I thought it was a UFO, so I tried to shoot it with my NERF gun,” he later posted on the ABC North West Facebook page.

So, is it aliens?

University of Southern Queensland astrophysics professor Jonti Horner said those who hoped the light was a sign of alien life would be left disappointed.

“My first thought was it’s a meteor, but looking at the footage it can’t be a meteor, it’s not something in the Earth’s atmosphere at all,” he said.

“It looks like a rocket, something orbiting the Earth doing a prolonged engine burn.

“Interestingly, earlier today India launched its second moon mission [Chandrayaan-2] so it seems a really good bet that this is that engaging its engine to move towards the moon.

“It’s not quite [a sign of alien life] – it’s a sign of India going to the moon.

“In some ways that’s even cooler, you are seeing something that is exciting and it’s worth remembering that we are now in an era that it’s not just the US and Russia, we have China on the moon and India going, it really is a global endeavour.”

How was it discovered?

Within an hour of posting the photo Cr Royes shared, the ABC North West Queensland Facebook page had more than 1000 comments.

Cr Royes said she was shocked to see how many others had seen the light.

“The quick response we’ve got to tell us what it is.

“Within an hour and a half we already know what it is, that’s the power of social media I guess.”

Professor Horner said there had been several instances in the past 50 years where prolonged burns caused the night sky to light up.

“There were images like this that came out in 2018 when they launched the space car into orbit, so we’ve seen this before,” he said.

“The light you are seeing is a combination of the rocket burning, but you’ve also got the gas being ejected from the rocket, the gas is spreading out in space and reflecting spotlight as well, so it’s like it creates a cloud in space that gradually disperses with the rocket at the end of it.

“It’s the same thing you would have seen 50 years ago when Apollo 11 had done a few laps of the Earth and decided it was ready to head to the moon, they did exactly the same thing, they turned the engine off, did a long burn and sailed off.

“This is an indication of how engaged people get.

“Fifty years ago people would have seen this and just thought it was a UFO, but now we can get on Facebook and upload images and within an hour get a fairly good answer.”

‘I am not afraid’: The modern unknown soldier risks it all in Ukraine
Energy market reform will be a big boost for emissions reductions: Chris Bowen
Greens sign up for Labor’s looming jobs-and-skills summit as Liberals stick with boycott
Joe Biden’s $430b green victory for the environment
China cementing its Thailand ties with joint military exercises
NRL: Titans frantic to end 10-game losing streak as Manly showdown looms
Rain or shine, ant nothing stopping this population boom
Today's Stories