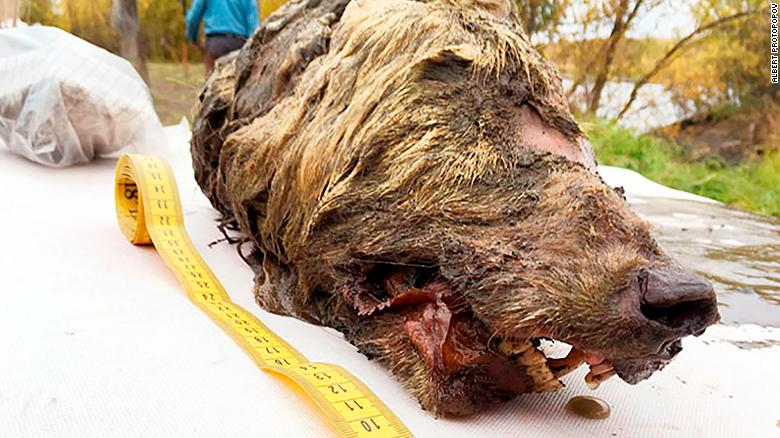 The head of a giant wolf thought to have been frozen for more than 40,000 years has been pulled from permafrost in remote Siberia.

Palaeontologists have revealed images of a head of an ancient species of Pleistocene wolf, thought to have been remarkably preserved since the last Ice Age.

Measuring 40 centimetres in length, the wolf head was discovered last year by a local resident hunting for mammoth tusks near the shores of the Tirekhtyakh River in the Russian Republic of Sakha.

The discovery was made public at the Miraikan National Museum of Emerging Science and Innovation in Tokyo, Japan during the grand opening of its mammoth exhibit.

Large ancient wolves, including the dire wolf made famous by the HBO series Game of Thrones, existed during this period, hunting large game, such as bison, camels, and horses.

“This is a unique discovery of the first ever remains of a fully grown Pleistocene wolf with its tissue preserved,” palaeontologist Albert Protopopov from the Republic of Sakha Academy of Sciences told The Siberian Times.

“We will be comparing it to modern-day wolves to understand how the species has evolved and to reconstruct its appearance,” Mr Protopopov said.

The fully grown Pleistocene wolf was thought to have been around two to four years old when it died.

Images of the wolf taken by Mr Protopopov show clumps of thick fur on its head, an immaculate snout, and a massive set of fangs.

The larger species of wolf are thought to have become extinct between 20,000 and 10,000 years ago as the Earth’s climate warmed.

Mr Protopopov told CNN that as the planet warms further, the region is likely to yield more remains.

“The number of discoveries is growing because of the thaw of the permafrost,” he said.

The Swedish Museum of Natural History will attempt to extract DNA from the latest wolf specimen, the Siberian Times reported.

The find follows the discovery of a number of ancient cave lion cubs in the same region in 2015 and 2017.

Mr Protopopov said he will join scientists from Sweden and Japan in analysing the wolf’s DNA and using tomographic techniques to non-invasively see inside its skull.