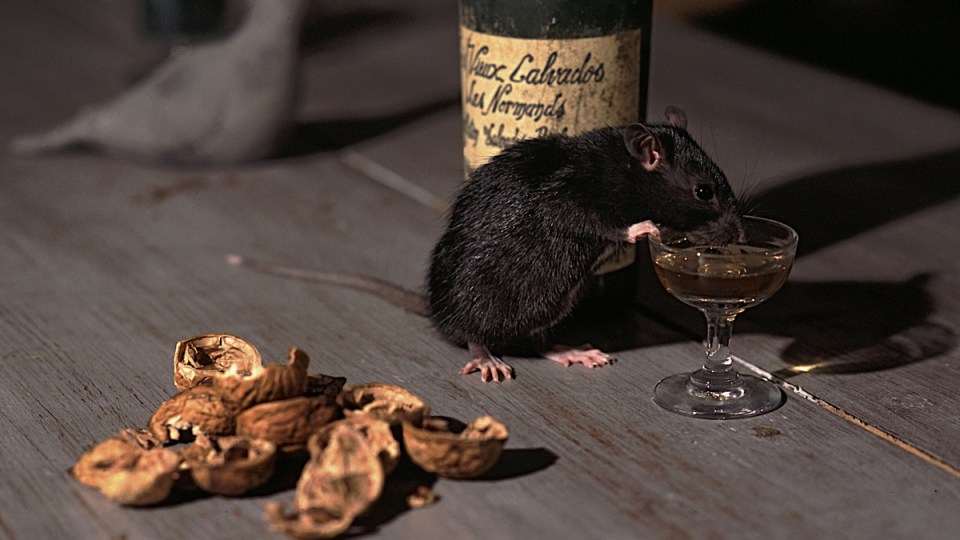 Alcoholic rats lost their taste for booze when lasers targeted a set of neurons that support cravings. Photo: Getty

Don’t try this at home: When scientists shot lasers into a specific cluster of nerves in the brains of alcoholic rats, the creatures lost all interest in drinking – and their physical symptoms of withdrawal were reduced.

When the lasers were switched off, the rats returned to cadging drinks and otherwise making fools of themselves.

Dr Olivier George, an associate professor at Scripps Research Institute, and senior author of the new study, has described this discovery as a potential cure for alcoholism with the “flip of a switch”.

Light sabres won’t do the job

Just to be clear: The lasers weren’t the sort of space guns that leave smoking holes in people.

Rather, they were optic fibres implanted in the rat brains – a technique called optogenetics, where light is used to modulate molecular events in a targeted manner in living cells or organisms.

Even so, while brain implants are a growing area of research for the treatment of all manner of brain and psychological conditions, Dr George sees the value of his work in identifying a specific and obscure collection of neurons that could be targeted with drug or even gene therapies.

“This discovery is exciting. It means we have another piece of the puzzle to explain the neural mechanism driving alcohol consumption,” said Dr George in a prepared statement.

“We need compounds that are specific to this neuronal circuitry.”

We certainly need something

According to the Australian Institute of Health and Welfare, one in four (26 per cent) people have consumed alcohol at levels placing them at risk of harm on a single occasion, at least monthly.

A third of drug treatment episodes in 2015-16 were primarily for alcohol, making it the most commonly treated drug in Australia.

Previous work at Scripps Research found that transitioning from casual drinking to dependent drinking “occurs alongside fundamental changes in how the brain sends signals”.

These signals drive the intense cravings that make it so difficult for many people to scale back their alcohol consumption.

In 2016, Dr George and his colleagues reported that they had found the location of brain cells that drive drinking in an alcohol-addicted rat model.

They described their discovery as a neuronal “ensemble”, or group of connected cells in a brain region called the central nucleus of the amygdala – a region associated with fear and anxiety.

Eighty per cent of the ensemble consisted of nerve cells called corticotropin-releasing factor (CRF) neurons. (Corticotropin is a peptide hormone involved in the stress response).

Here’s how they did it

Step one: Implant the rat brains with optic fibres, targeting the CRF neurons.

Step two: Establish a baseline for how much the rats would drink before they became addicted to alcohol. The rats kept themselves tidy at this point, sticking to the equivalent of a glass of wine or one beer for a human.

Step four: Cut off the supply and record withdrawal symptoms, such as abnormal gait and shaking.

Step five: Get the booze flowing again. The rats drank more than ever. The ensemble containing the CRF cells were seen to be active, telling the rats to drink more.

Step six: Fire up the lasers to inactivate the CRF nerve cells.

Breakthrough not the whole story

“The intense motivation to drink had gone away. Inactivating these neurons also reduced the physical symptoms of withdrawal. The effect was even reversible. Turn off the lasers, and the rats returned to their dependent behaviour.”

Scripps boasts that “from a basic science standpoint, this breakthrough is huge: It reveals wiring in the brain that drives a specific, destructive behaviour.”

This is hard to deny. But the brain’s secrets in relation to alcohol addictions are far from fully mapped.

Dr Giordano de Guglielmo, PhD, first author of the study and staff scientist at Scripps Research, plans to investigate the signalling pathways in the brain affected when the CRF neurons are deactivated.

The study found that the CRF nerve cells sent signals to another brain region called the bed nucleus of the stria terminalis.

Dr De Guglielmo thinks this activity may have different roles in alcohol addiction. He is also interested in identifying the role of these brain circuits in opioid addiction.

Cheers everybody! Scientists cure alcoholism in rats with ‘flip of a switch’