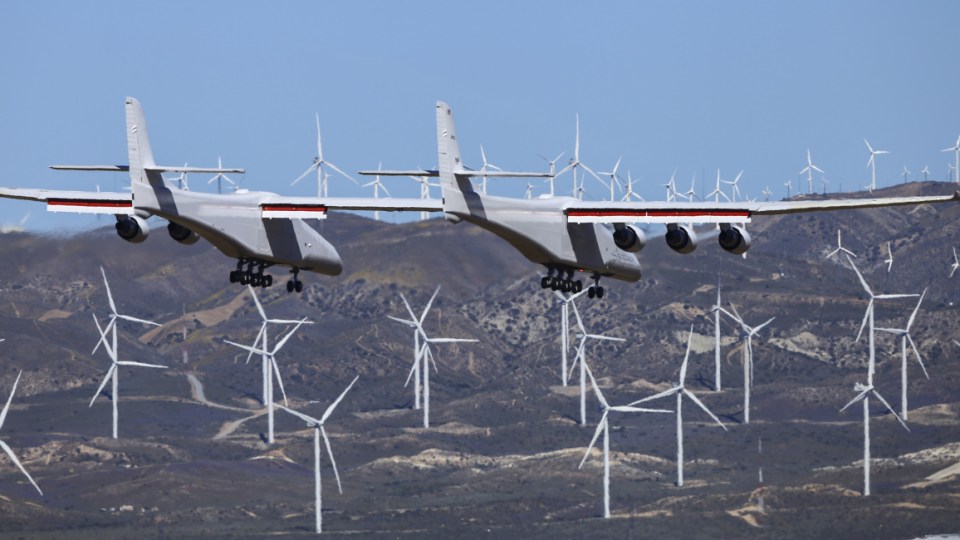 Stratolaunch has a wingspan of 117 metres. Photo: AAP

A plane with a whopping wingspan the length of two Olympic-sized swimming pools could revolutionise the way scientists and the military send objects into space.

A jet, with wings spanning 117 metres, looked more like a UFO as it performed laps over a Californian desert in a maiden test flight that broke records.

And while in future the aircraft will only fly as high as a regular passenger plane, its cargo would be bound for the stars.

Like a kind of flying launchpad, the plane – newly crowned the world’s largest by wingspan – will travel 10 kilometres above the Earth before releasing objects into outer space.

It is hoped satellites could be attached, then released, when the aircraft reaches the Earth’s stratosphere – the second-most outer layer – before being hurled into orbit.

Typical Saturday AM in the high desert of CA…first flight of world’s largest aircraft…NBD. Congrats to the many folks ⁦@ScaledC⁩ who made this happen! It was surreal to see in person. pic.twitter.com/eaWu4qtkRx

Onlookers had their phones pointed skyward in the Mojave Desert to catch a glimpse of the historic flight.

It looked like two planes flying side by side – conjoined twins in the sky – yet just one person had control of the mammoth object as it performed laps for more than two hours.

Pilot Evan Thomas flew the jet in circles around the desert at an altitude of around five kilometres and reached speeds of 274km/h.

“The airplane handled it very nicely, smoothly rotated and really just lifted off the ground,” he told reporters after touching down from the maiden voyage.

Stratolaunch was established in 2011 by late Microsoft co-founder Paul Allen, who died of cancer before he was able to see his vision become reality.

“We all know Paul would have been proud to witness today’s historic achievement,” said Jody Allen, the late billionaire’s sister and chair of his philanthropic trust.

“The aircraft is a remarkable engineering achievement and we congratulate everyone involved.”

The company behind Stratolaunch hopes to make sending satellites into space more affordable and accessible by using aircraft, rather than launching rockets from the ground.

According to its website, using a plane instead of a rocket would mean that bad weather could be avoided and take-offs could occur from any airport in the world – providing a runway long enough to cope with the enormous wings can be found.

Stratolaunch founders describe its 73-metre-long aircraft as the “world’s largest”, but there are aircraft that are longer from nose to tail.

The record-breaking feat for this aircraft is in its enormous width.

Stratolaunch is also not the only company vying for dominance in the space-launch race.