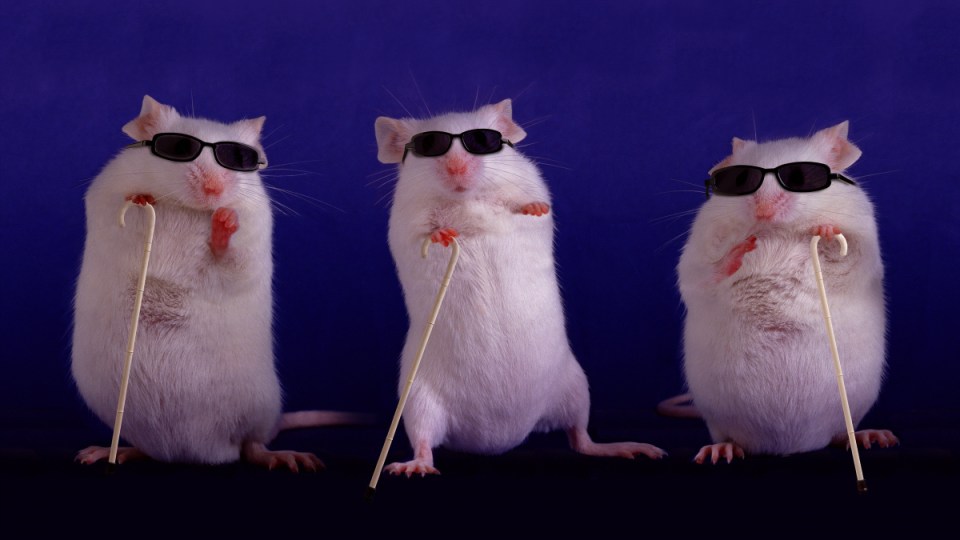 Scientists inserted a gene for a green-light receptor into the eyes of blind mice and, a month later, they were navigating around obstacles as easily as mice with no vision problems. Photo: Getty

In three years time, people made blind by macular degeneration – and others with inherited retinigtis pigmentosa – may be able to navigate a cluttered room and read an iPad, or at least watch a movie on it.

This was the result when University of California, Berkeley, scientists inserted a gene for a green-light receptor cone into the eyes of blind mice: a month later, they were recognising and responding to movement, getting about as confidently as sighted mice, responding to light over a thousandfold range and find detail on a tablet.

The scientists – who have conducted similar, but more complex experiments with less spectacular results over a decade – are certainly confident they have found a pathway to restore sight to the 170 million people around the world who went dark via retinal degeneration.

Retinal degeneration kills off the rods (sensitive to dim, grey light) and cones (brighter light and colours) in the eye and there is no way to bring them back.

However, other cells in the retina – the bipolar and retinal ganglion cells – usually remain healthy but are insensitive to light. But what if they could be made sensitive?

First, the researchers designed an adeno-associated virus (AAV) to target the retinal ganglion cells and infect them with the gene for a light-sensitive receptor, the green (medium-wavelength) cone opsin (a protein).

Normally, this opsin is expressed only by cone photoreceptor cells and makes them sensitive to green-yellow light.

“When injected into the eye, the virus carried the gene into ganglion cells … and made them light-sensitive and able to send signals to the brain that were interpreted as sight,” a statement from the university said.

In mice, the researchers were able to light-activate 90 per cent of the ganglion cells in the retina.

To treat humans, they would need to up the dose and inject many more virus particles: the human eye contains thousands of times more ganglion cells than the mouse eye.

But the Berkeley team says, “No problem”: it’s developed the means “to enhance viral delivery and hopes to insert the new light sensor into a similarly high percentage of ganglion cells, an amount equivalent to the very high pixel numbers in a camera”.

Similar delivery systems using deactivated viruses have been approved by the Food and Drug Administration for use in gene therapies – for people with inherited degenerative retinal conditions and who have no medical alternative.

This has emboldened the researchers – UC Berkeley professors of molecular and cell biology Ehud Isacoff and John Flannery – to begin raising funds to take their gene therapy into a human trial within three years.

“You would inject this virus into a person’s eye and, a couple months later, they’d be seeing something,” Dr Isacoff said, director of the Helen Wills Neuroscience Institute.

“With neurodegenerative diseases of the retina, often all people try to do is halt or slow further degeneration. But something that restores an image in a few months – it is an amazing thing to think about.”

It’s certainly a less cumbersome and presumably cheaper option to the electronic eye implant, the only treatment for people who have lost their sight to retinal degeneration, and one that many can’t afford.

It’s not much fun: the patient is hooked up to a video camera that sits on a pair of glasses, and produces an image on the retina that is equivalent to a few hundred pixels.

Normal, sharp vision involves millions of pixels – and the Berkley solution appears to go some way in delivering that higher quality vision.

“That this system works is really, really satisfying, in part because it’s also very simple,” Dr Isacoff said. “Ironically, you could have done this 20 years ago.”