For thousands of hopeful parents undergoing IVF, the exciting process of falling pregnant can be marred by a recurring cycle of uncertainty and fading hope.

But, a powerful new self-training supercomputer could take the guesswork out of assisted fertility – and it’s being trialled for the first time right here in Australia.

Called Ivy, the Australian invention uses artificial intelligence to select the embryo with the best chance of success with more accuracy than humans, according to preliminary data collected by fertility specialists.

The New Daily can also reveal the technology is to be rolled out as part of a multi-centre randomised trial to determine if it helps reduce the time to fall pregnant through IVF.

“The Ivy predicts the likelihood of an embryo implanting more effectively than any other method,” Associate Professor Peter Illingworth, who is part of the planned trial, said.

“The hope is that by using a more effective method of embryo selection we will be able to improve pregnancy rates, but we have no evidence for that at the moment.”

Traditionally, embryologists undergo the painstaking process of manually assessing the embryos and selecting the ones they think will have the best chance of implanting successfully.

They might look at how quickly an embryo divides in the first few days of incubation, or how well it forms on day five.

It’s not a perfect science, the process is filled with unknowns, and heavily relies on fertility specialists using their judgement to make this crucial decision.

While there are many reasons why the IVF process may become unstuck along the way – an unhealthy egg or its age are just a couple of the main concerns – selecting the right embryo before transferring to a woman undergoing IVF is an important factor in speeding up the time to pregnancy.

At thousands of dollars for each cycle, taking too long to implant can also prove to be a costly and emotionally taxing exercise for people desperately trying to conceive. 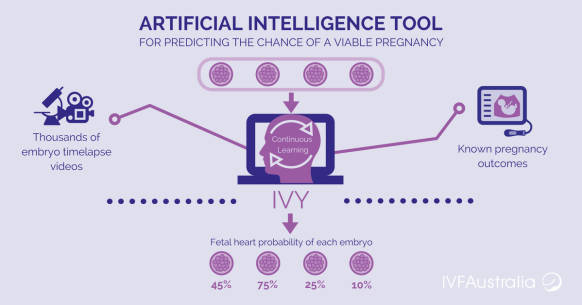 Worldwide, there has been a move away from manual to time-lapse incubators, which are capable of taking photos every seven minutes of the embryo growing.

This generates huge amounts of data over the five days, but on its own, it’s still leading to cloudy results.

That’s where artificial intelligence comes in.

Ivy, which was invented by Australian Aengus Tran while still an undergraduate medical student at the University of New South Wales, helps embryologists navigate the fog.

“Ivy has taught itself how to select out the embryo with the highest potential to create a foetal heart,” Dr Tran, who is developing the technology with IVF Australia’s Dr Simon Cooke, said in a media statement.

Rather than replacing fertility specialists, Ivy works with scientists to work out the most viable option.

Ivy analyses the images from the time-lapse, and scientists then feed it with data that shows which embryos led to a successful foetal heart pregnancy, which is when a baby’s heartbeat is seen on a scan after seven weeks.

The supercomputer then self-improves and retrains itself to objectively identify the embryos with successful pregnancies.

“When people use computers to work out what they know already, it’s all programmed by humans. Here the machine has taken over,” Associate Professor Illingworth said.

“We don’t know what it looks at, we just know the computer takes all the images with an objective view. That’s the beautiful thing.”

Data from more than 10,000 embryos from 1603 patients aged between 22 and 50 have already been collected and analysed in pre-clinical trials conducted by Virtus Health, the assisted reproductive technology company that is backing Ivy.

According to Virtus, Ivy has selected the embryo most likely to progress to a foetal heartbeat 93 per cent of the time.

Another artificial intelligence tool, developed by Cornell University, was found to accurately select the right embryo at a success rate of 85 per cent, according to a paper presented at the 2018 American Society for Reproductive Medicine symposium in the US.

Virtus Health CEO Sue Channon told The New Daily her team has observed a significant improvement in clinical pregnancies – that is, when a patient comes back with a positive pregnancy test.

“On average across our patients before we applied this technology we were getting a 26 per cent increase in clinical pregnancy outcomes. With the application of Ivy, we’ve seen that go to above 30 per cent, which in IVF world is quite a significant increase,” she said.

While these observational results are promising, the next step is for scientists to evaluate Ivy’s effectiveness in randomised clinical trials.

This will determine whether the technology can progress from an early heartbeat, to a successful pregnancy and live birth.

“If a woman had a batch of embryos in an incubator, she’s going to get a baby from them sooner or later. But what the selection technique aims to do is to shorten the time it takes to fall pregnant,” Associate Professor Illingworth said.

“Live births are important and that’s what the randomised trial will be able to see, if we can improve the live birth rate after that.”