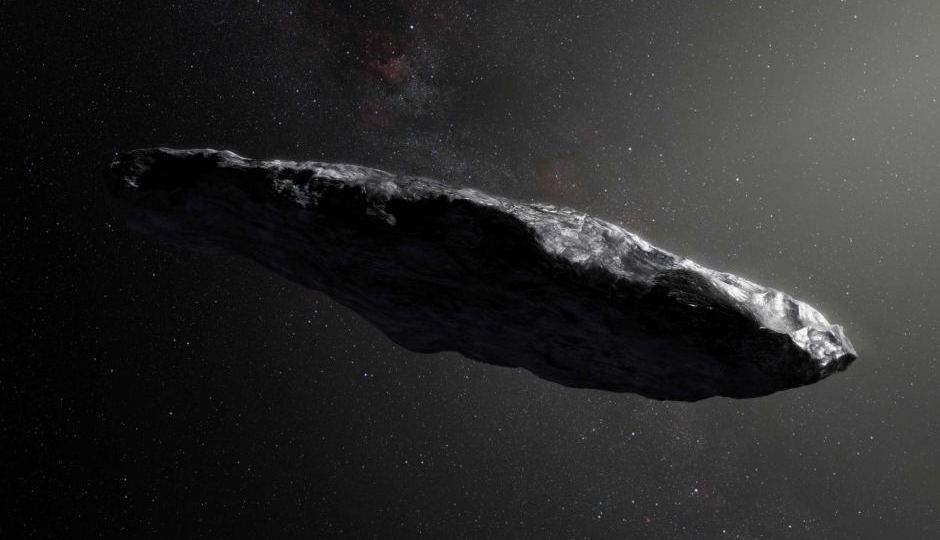 The chairman of Harvard University’s astronomy department has defended his controversial claim that an interstellar object that passed through our solar system could have been “of artificial origin”.

Professors Abraham Loeb and Shmuel Bialy suggested the cigar-shaped object that passed through the solar system in late 2017 and early 2018 could have been a discarded light sail of extra-terrestrial origin, perhaps sent here on purpose.

The theory was greeted with scepticism, and was dismissed as “wild speculation” by Robert Weryk, the scientist who discovered the object – later named Oumuamua, a Hawaiian word meaning “a messenger from afar arriving first”.

But in a wide-ranging interview with Israeli newspaper Haaretz, Professor Loeb said he did not care what people said, commenting that: “Science isn’t like politics. It is not based on popularity polls”.

He said his article was written after conversations with his colleagues, who were “apprehensive about making their thoughts public”.

“I don’t understand that. After all, academic tenure is intended to give scientists the freedom to take risks without having to worry about their jobs,” he said.

“Unfortunately, most scientists achieve tenure – and go on tending to their image.”

Although he admitted he may not have published the article without tenure, he said the search for extra-terrestrial life was not mere speculation.

“Science contains many examples of hypotheses that haven’t yet been borne out by observations, because science progresses on a basis of anomalies, on a basis of phenomena that aren’t amenable to conventional explanations.

“If you’re not ready to find exceptional things, you won’t discover them. Of course, every argument needs to be based on evidence, but if the evidence points to an anomaly, we need to talk about an anomaly.

“Imagine if cavemen had been shown the smartphone you’re using to record me. What would they have thought about this special rock?

“Now imagine that Oumuamua is the iPhone, and we are the cavemen. Imagine scientists who are considered the visionaries of reason among the cavemen looking at the device and saying, ‘No, it’s just a rock. A special rock, but a rock. Where do you come off claiming it’s not a rock?'”

Mixed theories on why Oumuamua accelerated

In late October 2017, NASA said the recently discovered interstellar visitor appeared “to have originated from outside the solar system, coming from somewhere else in our galaxy”.

“This unusual object … is less than [400 metres] in diameter and is moving remarkably fast,” NASA said at the time.

“Astronomers are urgently working to point telescopes around the world and in space at this notable object.

“Once these data are obtained and analysed, astronomers may know more about the origin and possibly composition of the object.”

Curiously, the object sped up during its visit to the inner solar system, an acceleration unexplained by the sun’s gravity. The acceleration could have been caused by outgassing, like that of a comet, where the warmth of the sun causes acceleration. But observations of Oumuamua did not reveal a comet tail or gas emissions.

Professor Loeb and Professor Bialy then published their article suggesting it could be a light sail among other theories, and positing that its acceleration was caused by a “push from solar radiation pressure”.

“If radiation pressure is the accelerating force, then Oumuamua represents a new class of thin interstellar material, either produced naturally, through a yet-unknown process in the [interstellar medium] or in proto-planetary disks, or of an artificial origin,” they said.

They said it seemed to use the Sun’s radiation as an energy source, and even if it was only a natural object, it was still unique.

However, Dr Weryk said data gathered during his research contradicted that theory and he had concluded the object was a comet.

“There’s a maximum speed that you can be travelling to be bound gravitationally by the sun,” he said.

“When we first saw this object, it was travelling faster than that, so we know for a fact that it’s from outside our solar system. We decided that it was a comet that had a bit of outgassing that wasn’t visible from the ground, which is why it didn’t appear to be a comet.

“[The Harvard researchers] decided to focus on another aspect of that, that it’s an alien spacecraft and that it has a solar sail-type material that’s causing the non-gravitational trajectory. But we actually believe that’s not true based on the data we obtained.”