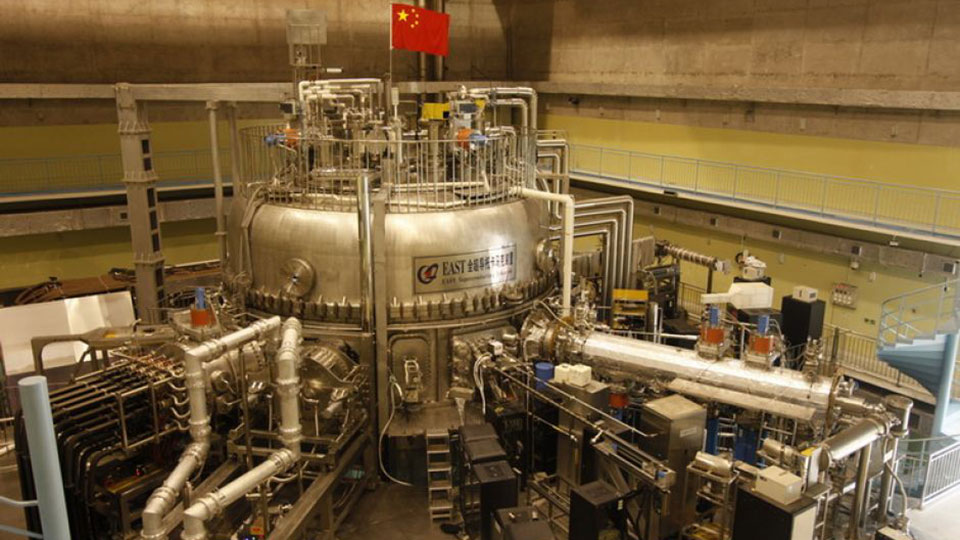 Chinese nuclear scientists have reached an important milestone in the global quest to harness energy from nuclear fusion, a process that occurs naturally in the sun.

To put that in perspective, the temperature at the core of the sun is said to be about 15 million degrees Celsius, making the plasma in China’s “artificial sun” more than six times hotter than the original.

The news comes after China shocked the science community last month with plans to launch an “artificial moon” bright enough to replace city streetlights by 2020.

Speaking to the ABC, Associate Professor Matthew Hole from the Australian National University said the achievement was an important step for nuclear fusion science.

“It’s certainly a significant step for China’s nuclear fusion program and an important development for the whole world,” Dr Hole said, adding that developing fusion reactors could be the solution to global energy problems.

“The benefit is simple in that it is very large-scale base load [continuous] energy production, with zero greenhouse gas emissions and no long-life radioactive waste.

“It provides a silver bullet energy solution … providing that one can harness it.”

He added that nuclear fusion reactors also avoid risks associated with the currently employed nuclear fission reactors, which can be adapted into dangerous weapons and are prone to possible catastrophic meltdowns.

The news went viral on Chinese social media, with most users excited by the achievement.

“There is nothing China can’t make,” one user on Weibo said.

Another proclaimed that “if this technology is put in use, the world will no longer feel anxious about the energy crisis”.

So how did China manage to pull it off?

While current nuclear power plants rely on nuclear fission – a chain reaction where uranium atoms are split to release energy – nuclear fusion effectively does the opposite by forcing atoms to merge.

One way of achieving this on Earth is by using what’s known as a tokamak, a device designed to replicate the nuclear fusion process that occurs naturally in the Sun and stars to generate energy.

The EAST that pulled off the 100 million Celsius feat stands at 11 metres tall, has a diameter of 8 metres and weighs about 360 tonnes.

It uses a ring to house heavy and super-heavy isotopes – atomic variations – of hydrogen known as deuterium and tritium.
The isotopes are heated by powerful electric currents within the tokamak, tearing electrons away from their atoms and forming a charged plasma of hydrogen ions.

Powerful magnets lining the inner walls of EAST then contain the plasma to a tiny area to maximise the chance that the ions will fuse together.

When the ions fuse they give off a large amount of energy, which can then be harnessed to run a power plant and produce electricity.

The Chinese research team said it was able to achieve the record temperature through the use of various new techniques in heating and controlling the plasma, but could only maintain the state for about 10 seconds.

The latest breakthrough provided experimental evidence that reaching the 100 million degrees Celsius mark is possible, according to China’s Institute of Plasma Physics.

Nuclear fusion a global mission, but not in Australia

Dr Hole said that while the energy possibilities of nuclear fusion as a clean energy source has attracted large investment from countries all over the world – including China – Australia has lagged behind.

“As a nation, Australia is about to lose its capability in fusion,” Dr Hole said, adding that many of his colleagues have changed field or are looking for work overseas due to a lack of investment in fusion science.

“Australia used to have good investment in this space, but it has really been neglected in recent years.”

He said that the achievement by EAST will be important to the development of the next major experiment in global nuclear fusion science: the International Thermonuclear Experimental Reactor (ITER).

Currently being built in southern France with collaboration from 35 nations including China, ITER is set to be the first fusion device to consistently produce net energy, producing 500 megawatts of clean and sustainable power.

As EAST has a similar design to ITER but on a far smaller scale, it is likely to be an important testing device during the development of ITER, according to China’s Institute of Plasma Physics.

ITER is expected to be ready to create its first plasma and begin operations in 2025.