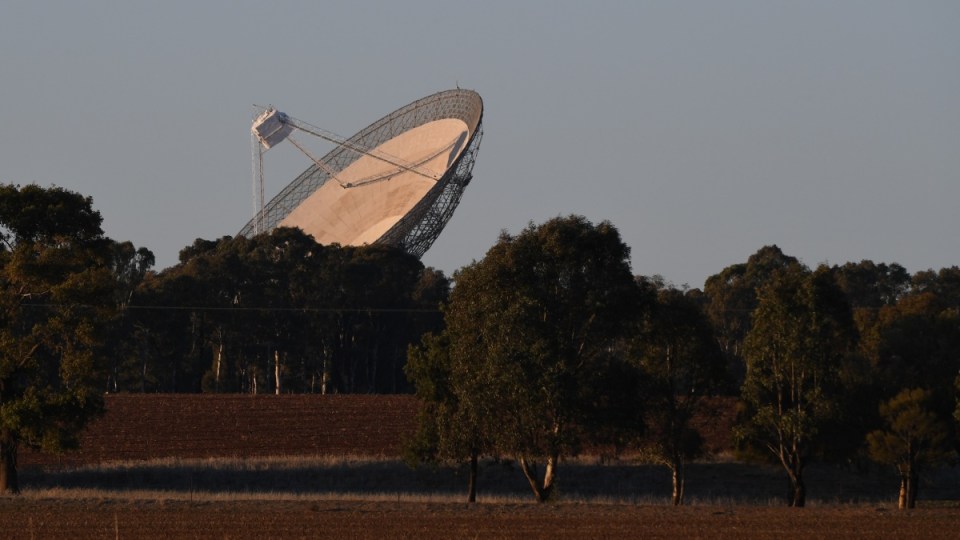 The Parkes Radio Telescope is one way Australian scientists are scanning the universe for signs of alien life. Photo: AAP

The hunt for alien intelligence has become an increasingly mainstream scientific pursuit and Australia is playing a key role in global efforts to understand if humans are truly alone in the universe.

A new research paper from Harvard astrophysicist Professor Abraham Loeb has reignited interest in the possibility of life from beyond the stars, by suggesting the cigar-shaped ‘Oumuamua’ object that passed by Earth on its journey from outside the solar system could be a “fully operational probe” sent by extraterrestrial beings.

It reads like something lifted from the manuscripts of HG Wells or John Wyndham, but Professor Loeb’s paper is part of a growing field of scientific research, one in which Australia is playing an important role.

The Murchison Widefield Array, a Western Australian low-frequency radio telescope, was one of the telescopes used to investigate the ‘Oumuamua’ object.

Dr Steven Tingay, an astrophysicist and executive director of Curtin University’s Institute of Radio Astronomy (CIRA), worked on the investigation and said the object posed “interesting questions” for the various scientists examining the depths of space.

“It was an interesting object,” Dr Tingay told The New Daily.

“We were basically doing a direct search for the sorts of signals that could be expected through purposeful transmissions.”

It’s not uncommon for Australia’s radio telescopes to be used for this kind of research, Dr Tingay said, and both WA’s Murchison Widefield Array and NSW’s Parkes radio telescope are both “beautifully suited to this sort of thing”.

Dr Tingay said the search for extraterrestrial life is “an important and growing” part of Australia’s scientific research – and radio signals are only one of the ways scientists are looking.

Monash University astronomer Dr Michael Brown said “there’s multiple avenues” that can be used to identify signs of life, including looking for microbial organisms on Mars or under the icy surface of Jupiter’s moon Europa.

“In the coming decades, we should be able to measure the atmosphere of planets going around other stars and that might show indications of life. That would be a big deal too,” Dr Brown said.

But this research is not without its detractors; Dr Tingay said that while most scientists are accustomed to this field of work, the public’s responses vary.

“If you walk into the street and start talking about aliens, you’ll get a range of reactions, so it’s always going to be one of those things,” he said.

“But for the scientists involved, I would say it’s a pretty serious, mainstream activity now.”

Dr Brown said people had often mistaken other planets and spacecrafts for UFOs.

“Satellites are often confused for UFOs as some of them reflect sunlight,” Dr Brown told The New Daily.

“Venus is often mistaken for a UFO because it’s actually very bright – much brighter than they expect.

“People often see a bright flash of light for five seconds in the sky and that’s mistaken for a UFO as well.”

He said to treat UFO sightings with a great deal of caution.

“I suspect some of them are very sincere, but there is usually a mundane explanation,” he said.

“There are so many classic UFO sighting stories from the 1950s and the ’60s where there’s a blurry black-and-white photo and eyewitness reports.

“But in the digital age, particularly in 21st century, where we have cameras in our pockets for nicer and crisper UFO photos – people aren’t getting those photos.”

He said there was a possibility that life existed elsewhere in the universe.

“The universe is really, really big. For me personally the odds that we’re the only life in the universe are slim.

“There’s so many places where life could be and it’s a good chance it’s out there somewhere, but the chances of us visiting them or contacting them are very low.”

In fact, Curtin University’s Dr Tingay said recent evidence suggested the portion of the sky we’ve examined so far would be equivalent to a bathtub of water out of the ocean.

“That’s the sort of ratio that we’ve searched across the relevant, observable universe,” he said.

Regardless, the search goes on, though Dr Tingay cautioned that people shouldn’t rush to judgement each time a new paper posits objects in space to be of alien origin – what’s needed is positive evidence rather than speculation.

“So, not a set of observations that results in something that is difficult to explain and then a speculation that it could be consistent with a spacecraft,” he said.

“Positive evidence would be a signal that’s clearly purposefully transmitted. It would be a direct imaging observation of the object itself.”

How Australia is helping the global search for alien life