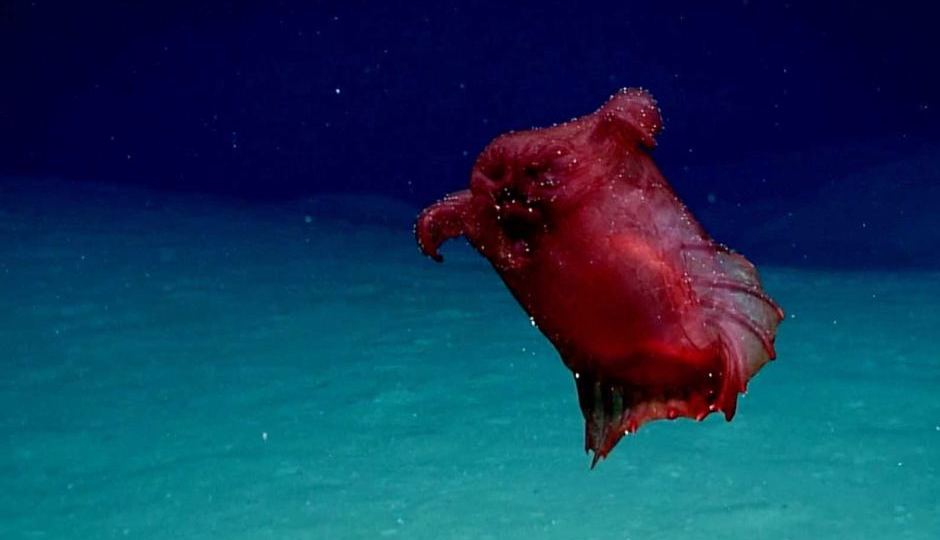 The headless chicken monster was first filmed last year in the Gulf of Mexico. Photo: NOAA

The Australian Antarctic Division (AAD) has filmed a highly unusual sea cucumber, marking the first time it has been spotted in the depths of the Southern Ocean.

AAD research scientist Dirk Welsford said the discovery of the organism, found floating three kilometres below the surface, off Heard Island, was a real surprise.

“We’d never seen this thing before … at the time, none of us actually knew what it was, so we did what a lot of scientists do and googled it,” Dr Welsford said.

Behold the majestic "headless chicken monster" or Enypniasties eximia, spotted recently in the Southern Ocean for the first time on an Australian fisheries camera. https://t.co/jQHv5L0uE3 pic.twitter.com/ZeChEiivCy

While most sea cucumbers are unable to swim, the headless chicken monster moves through the ocean depths and lowers itself to the sea floor to feed.

“It’s one of the most spectacular specimens I’ve ever seen,” he said.

“It’s quite charismatic the way it flies past the camera … and quite unusual that it can swim.”

The bright purple, plankton-eating organism, which has bat-like wings and is as large as a basketball, has only ever been filmed once before, in the Gulf of Mexico last year.

Dr Welsford said the organism’s quirky nickname was nothing more than the product of marine scientists having a laugh.

“It does look a little bit chicken shaped … and it’s a cool name,” he said.

“It’s also a reflection of how little we know about the deep sea and the strange things we see while doing studies down there.”

While little is known about what lies in the depths of the world’s oceans, the Southern Ocean’s extreme weather conditions and remoteness mean much of its inhabitants remain a mystery.

“There’s almost certainly many, many more things that we don’t know down there, waiting to be discovered,” Dr Welford said.

The animal is also known as the Spanish dancer, as its graceful stroke swaying in the current resembles that of a flamenco dress.

The underwater cameras deployed are of a similar quality to smartphone cameras, only they are housed in secure casing to withstand the high water pressure and sub-zero temperatures.

The AAD can now film deeper than ever from a fishing boat.

“Because [the technology] is now so portable and so cheap, we’re hoping to put cameras on nearly every fishing boat that goes down south, so we can rapidly get a lot of data on what’s going on down there, in a way we’ve never been able to before,” Dr Welsford said.

“Developing equipment that can survive the conditions has been really difficult until now.

“This is the deepest a camera has ever been deployed off a fishing vessel.”

The Southern Ocean is the only ocean that flows completely around the Earth, unimpeded by any significant landmass and is home to the most number of marine animals in the world.

“There are still many, many mysteries in the deep ocean that we’re only just starting to scratch the surface of,” Dr Welsford said.

Dr Welford hoped the use of underwater cameras would help paint a clearer picture of the diversity, number and location of organisms in the deepest reaches of the ocean.

The data generated from underwater cameras will be presented at the annual Commission for the Conservation of Antarctic Marine Living Resources meeting in Hobart on Monday.