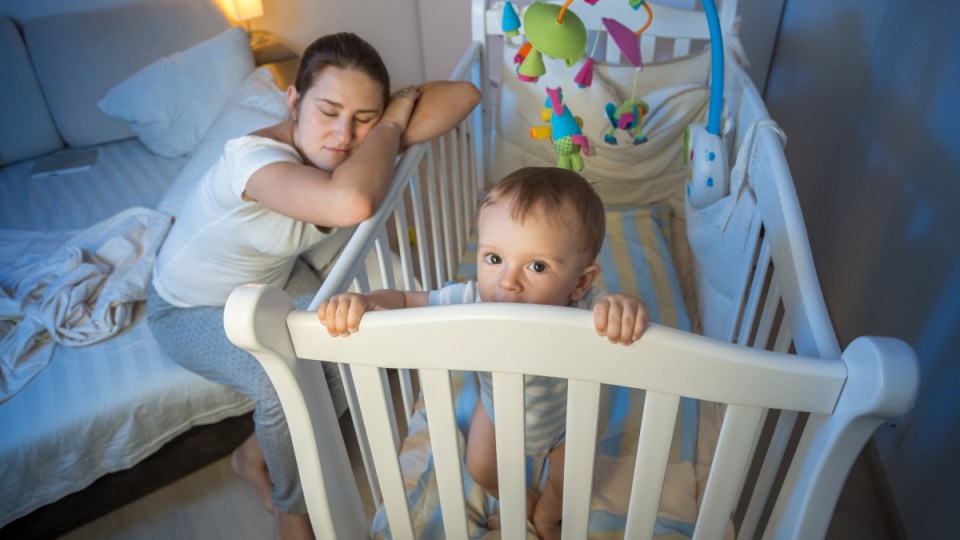 New research says it's not a lack of sleep that affects the sex life of new parents, but the number of night visits to the crib.

The shocking truth that dare not speak its name has now been confirmed by science: Having children kills your sex life, especially when they’re babies.

Oh well, sure. All that nerve-shattering howling and mewling and little choking sounds of misery are bound to encourage one to keep your pyjamas on, right?

But a new trouble-making study from Flinders University reveals “it is not the baby’s disrupted sleep patterns – common in the first months of life – but rather engaging with the baby during crib-side visits which is the biggest disincentive to parents’ sexual frequency”.

That’s right. Tip-toeing back and forth to check on that sweet little bundle – those endless moments of standing there and looking down and feeling gooey inside – is what really kills off the carnality.

Yes, you can cry now

According to a prepared statement from the university, there were two parts of the study.

The first was an online survey of 897 parents with babies aged between one month and 18 months.

In other words, a sophisticated baby cam recorded night-time visits to the crib.

This monitoring, a total of 8460 nights worth, coupled with the survey data, “collectively showed that more parent night-time crib visits were significantly associated with lower sexual frequency”.

“These findings suggest that it is not infant or parent sleep disruption per se, but rather parent night-time engagement with the infant that is associated with lower parent sexual activity frequency,” said Dr Michal Kahn, study co-author and post-doctoral fellow at Flinders’ College of Education, Psychology and Social Work.

She said the link between parental night-time engagement with the infant and lower sexual activity frequency was significant regardless of infant age.

Not surprised by findings

Dr Khan told The New Daily that she and her team “weren’t entirely surprised by the findings, although it was interesting that it was night-time engagement with the infant that was the one variable that remained significant after adjusting for all other variables”.

She said there were several possible theoretical explanations for this finding.

“One is the emotional energy being invested, with perhaps some frustration or anxiety or other emotions that might be depleting parents’ emotional resources,” said Dr Khan.

She said there might also be more physiological explanations, since waking up in the middle of the night, getting up from bed to do something for your baby – to soothe, rock or feed – could cause a range of physiological reactions, such as disruption of circadian rhythms.

“We can’t be sure what it is, but we think that these night-time visits may be causing an emotional-cognitive-physiological reaction that reduces the chances of partnered sexual activity.” she said.

Dr Khan said young infants require lots of external regulation to fall asleep, but “most infants can gradually learn to regulate themselves to sleep across the second half of the first year”.

“As sexual and sleep health both have a major impact on wellbeing, parents wishing to restore their sleep and sexual activity can gradually encourage more independent infant sleep,” she said.

By contrast, sexual satisfaction was not associated with parent night-time caregiving, parent or infant sleep, or parent-infant sleeping arrangements in adjusted models, suggesting that “satisfaction ratings may not be susceptible to the effects of disrupted sleep in the postpartum period”.

As good as it gets

The results suggest that the pattern of sexual activity that asserts itself in the six months following the birth of the baby is more or less how things will be in the ever after.

Dr Khan said that frequency of sexual activity increased with infant age, “yet increases beyond the first six months postpartum were non-significant”.

She said the study highlights how the postpartum period “often poses a considerable challenge for both parent sleep and sexual activity”.

Dr Khan had received no blowback from ‘mummy bloggers’ as yet.

“I haven’t heard anything yet, but will not be surprised if these findings give rise to a range of different opinions and interpretations, given that this is a very emotional topic,” she said.