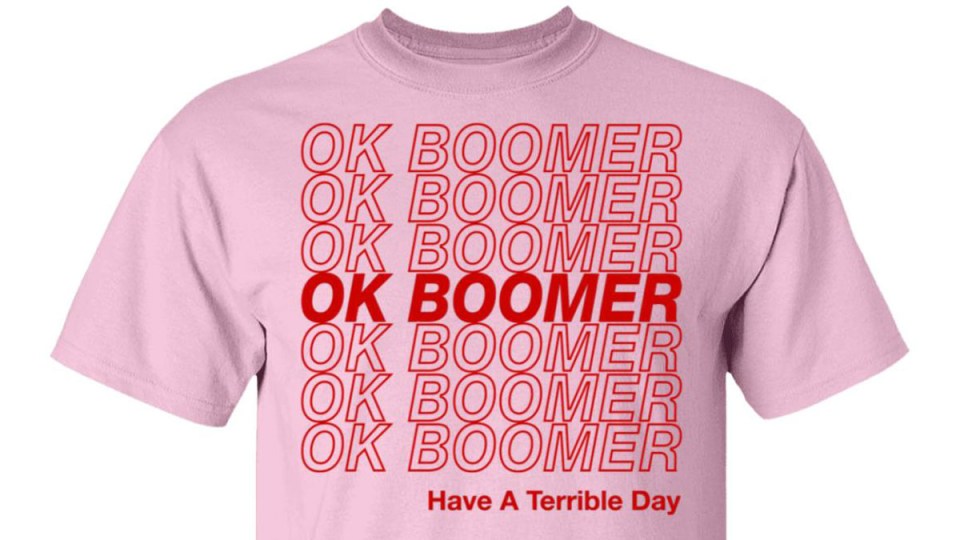 'OK Boomer' is the latest in a long line of terms used to establish generational divides. Photo: Supplied

If you have set foot anywhere near the internet over the last fortnight, chances are you have encountered a riposte currently empowering Generation Z and, increasingly, millennials.

It’s sparked endless memes, inspired viral videos, and even entered the hallowed halls of parliament to be recorded for eternity in Hansard.

And, as The New York Times declared, it signals the end of “friendly generation relations” as we know it.

To the uninitiated, welcome to the world of “OK Boomer.”

Younger generations are generally using the pejorative to reject dismissive attitudes of baby boomers — those born in the postwar period between 1946 and 1964. But it can refer to anyone older than them.

the reason “ok boomer” is such a great generational marker is it cleaves so neatly: boomers hate it, gen x will mock it, millennials will enthusiastically use it to the point of exhausting it without actually inventing it, and gen z has already moved on and thinks we are all nobs

Caitlin Fisher, author of The Gaslighting of the Millennial Generation, told NBC News that while the phrase may seem new, it’s been years in the making.

“Millennials have faced extraordinary levels of student loan debt only to be told that they need to take unpaid internships or cobble together a living wage with part-time work, [and] when we dare to complain, the boomers tell us that in their day, they put in their time,” Ms Fisher said.

In other words, the youth of today finally have a reliable, bruising comeback when someone says: “Kids have it so much better these days”.

So how did we end up at this new frontier of intergenerational warfare, and more importantly — will it ever stop?

The ‘slur’s’ origins are on TikTok

TikTok is a social media video-sharing app where its users — a vast majority under the age of 20 — document skits, lip syncs and more mundane moments of their lives in 15 seconds or less.

And it’s popular. More than one billion people globally have the app installed on their phones.

With that explained, the trend ignited after users began lipsyncing to a song titled ‘ok boomer’, posted to music-sharing platform Soundcloud.

The videos showcase members of Generation Z railing against long-held opinions of their elders. Some of the more popular examples consider the professionalism of tattoos, or the merits of spontaneous purchases.

And, on a larger scale, the trend reflects the ongoing debate over climate change, as teenagers seek inspiration in the defiant attitude of Swedish climate activist Greta Thunberg.

The generational rallying cry seeped out of TikTok and into the broader community almost instantly, as more young internet users cottoned on to its usage. And yes, it has been monetised in the form of merchandise.

From there, its popularity has risen by the day — almost exponentially.

Celebrities on Twitter have bought into the debate. Some, such as British comedian Ricky Gervais, opted for some friendly banter.

Guys, I think I have to leave Twitter. Someone with a pink cartoon unicorn as their avi just called me a Boomer. I’m strong, but not that strong.

However, others took exception to having the moniker bestowed on them. Star Trek‘s William Shatner found himself embroiled in an hours-long Twitter war after believing he was incorrectly targeted.

Sweetheart, that’s a compliment for me. 😘 https://t.co/djCtjiGBwr

However, that’s when heckles began raining down from an older MP.

Cue the retort, which — predictably — has since gone viral.

Boomers, should you be worried?

Conservative US radio host Bob Lonsberry decried ‘OK Boomer’ as a slur equivalent to “the n-word of ageism” in a since-deleted tweet. But is the phrase as vicious as it sounds?

The Guardian‘s Bhaskar Sunkara writes that widening the generational divide in offensive ways is counter-productive, and efforts should be focused on “harnessing the wisdom of our working-class elders.”

However, the LA Times‘ Mary McNamara says this is simply another example of a generation making itself known — akin to baby boomers embracing the hippie movement.

“Come on, boomers, stop being snowflakes. You are OK, you’re just getting old,” McNamara writes.

So our advice: if you find yourself the receiving end of an “OK Boomer”, let it bypass you — unless you want to encourage hundreds more.