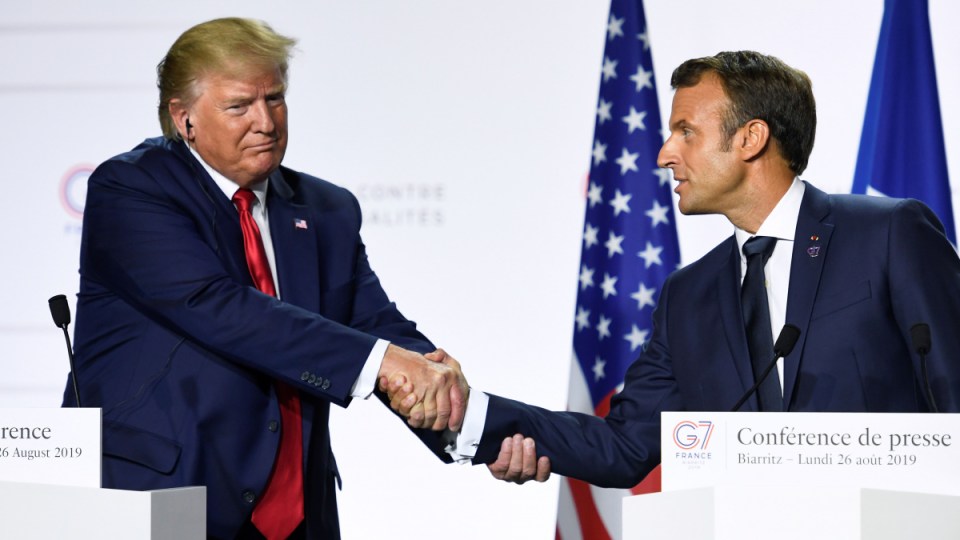 US President Trump And French President Macron have a history of trying to rip each other's arms off by way of saying "good to see you!" Photo: Getty

Shaking hands can often feel like a tug-of-war match coupled with a squeezing contest.

One person comes out looking weak, or at least startled, while the other looks like a thug.

But new research finds you don’t need to have a wrench-like grip or a violent up-and-down motion to do social damage with a handshake: All you need is to make it last longer than three seconds.

The study, from the University of Dundee’s School of Social Sciences found that prolonged handshake “can trigger anxiety, negatively impact business meetings and affect the state of our relationships”.

Psychologist Dr Emese Nagy, who led the study, said handshakes can have long-lasting consequences for the relationships that we form – and there’s plenty of evidence for this in the public sphere.

“Politicians are particularly keen on prolonged handshakes, which are often used an expression of warmth but also as a means of demonstrating authority,” said Dr Nagy in a prepared statement.

“However, our findings suggest that while doing so might look impressive for the cameras, this behaviour could potentially jeopardise the quality of their working and personal relationships from the beginning, which could have repercussions for millions of people.”

Of late, handshakes between politicians have become a joke – especially when one of the parties is US President Donald Trump, who appears to take every opportunity to assert his virility.

But it’s the serial hand-to-hand duelling between Mr Trump and French President Emmanuel Macron that has taken on a life of its own.

Some highlights from their mating-crab encounters:

May 2017, in its coverage of a NATO summit, The Daily Beast reported: “After an unusually long handshake with US President Trump …  Macron has suggested the gesture was meant to make the American president uncomfortable.”

June, 2018, The Telegraph reported, in its coverage of the G7 summit: “It wasn’t quite the 25-second gripper of their encounter during Donald Trump’s Bastille Day visit to Paris. But Emmanuel Macron … still managed to leave finger marks on his counterpart during what was no doubt an awkward meeting with the American leader at the G7 summit.”

In August, news site Second Nexus reported on a 13-second handshake between the two at the G7 conference in France: “Trump often uses handshakes as an expression of dominance —squeezing the recipient’s hand, jerking it around, and refusing to let go. The result, rather than an assertion of power, often just results in awkwardness for nearly everyone but the president himself.

“In this case, Macron wasn’t fazed … and ended up beating Trump at his own game. It’s the latest battle in what some laughingly consider a handshake war between the two.”

Laughingly? It’ll only end when one has pulled the arm from the other.

It was no laughing matter in 2004 when Mark Latham lost the election after inflicting a bully-boy standover handshake on the much smaller, much older and much smarter John Howard.

But an aggressive stance isn’t required to ruin a relationship – breaking the three-second rule, even gently, is enough to spoil the mood.

How come three seconds is so powerful?

Dr Nagy’s 2011 analysis of the duration of 188 spontaneous embraces between pairs of people from 32 different countries after high-tension finals in various sporting events during the 2008 Beijing Olympics also found “a mean duration of these embraces to be three seconds”.

So what’s going on? Dr Nagy, citing research going back a century, suggests the three-second interval corresponds to what we experience as “the now” in successive “present moments” in our lives.

“There has been evidence to suggest that many behaviours, such as hugs, fall within a window of approximately three seconds and this study has confirmed that handshakes that occur in this timeframe feel more natural to those who participate in the greeting,” she said.

In other words, people have a kind of “moments” clock that governs many of our interactions.

The hug or handshake, especially between people who are not intimates, has a natural life of three seconds before it becomes awkward.