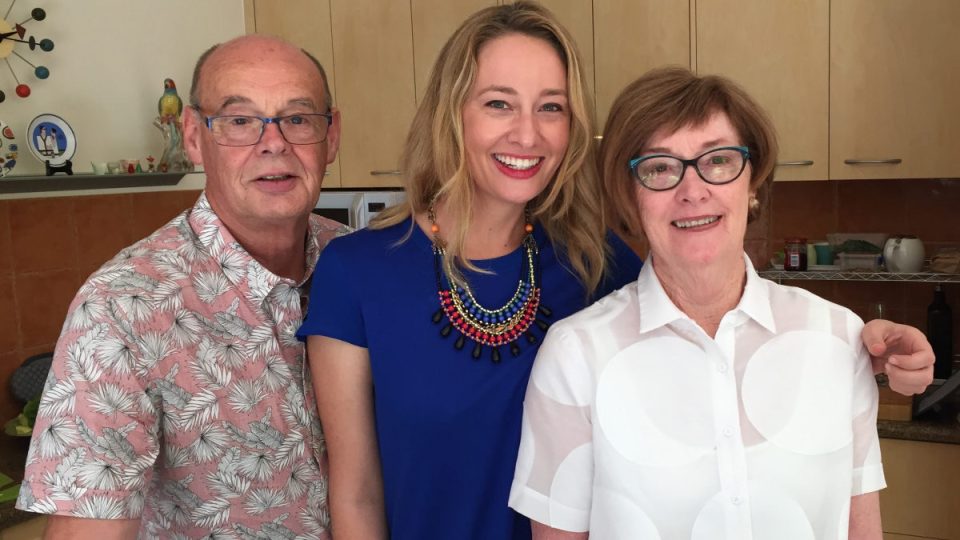 On the cusp of 40, Simone Mitchell found herself moving back home to live with parents Peter and Corinne. Photo: Supplied

A year ago my life blew up in spectacular fashion and I moved back in with my parents at the age of 38.

I was bruised and my instinct was to retreat to the warm embrace of family and friends while I recovered.

It was entirely unexpected for everyone involved.

I moved out of home when I was 17 and haven’t lived in the same town as my parents since.

My folks – both now in their 70s – would have thought they were well shot of me.

I’ve since discovered there’s a term for my type.

‘Boomerang children’ are offspring who move out of home but then return later in life, usually motivated by high living costs.

Lots of people do it for a spell to save money for a house deposit. In fact, one in five Australian households is currently multigenerational (generally considered to mean one or more adult offspring living with one or more of their parents).

Initially I felt enormously ashamed that I was scurrying home on the cusp of turning 40.

And I still don’t feel particularly proud of my current situation. But over the months I’ve come to appreciate what a gift this period of cohabitation has been.

My overwhelming feeling is one of extraordinary gratitude.

I have friends who have fractured relationships with their parents and moving back home will never be an option for them.

I am forever thankful that during one of the toughest periods of my life I had such a soft place to land. I was broken and they built me back up with bowls of stewed apple and patient ears.

From my point of view, the practical benefits have been mind-boggling.

The turnaround on laundry is lightning fast. A pair of jocks hits the laundry hamper at 4pm and said undies will be ironed (!) and lovingly laid on your bed by 9am the following morning.

The catering is also top notch.

Mum’s meals that I used to take for granted are now relished. At 39 I appreciate the planning, care and time that is poured into making dinner.

I am also loving cooking for them.

Having lived in a different city my entire adult life meant it was hard to have them over for a meal. Now I have the chance to trot out my favourite recipes and watch dad’s face pucker as he tries yuzu or natural wine for the first time.

My biggest contribution to the household has probably been tech support. It feels as if 21 years of computer/phone/internet issues has been saved up for my return.

I steered them out of the ridiculous mobile phone plans they were on and introduced them to iCloud and Spotify, which dad is still telling his friends about six months later.

Living so far apart for 21 years meant the time we spent together was usually relatively brief. There were often other people around and you skated on the surface of conversation. I have talked to them more than I have in years. It’s like we’re getting to know each other again as adults.

On a Tuesday night I found myself at a pub singing sea shanties with my father and I had the overwhelming sense this was a special spontaneous moment that I otherwise wouldn’t have enjoyed.

As they are getting older I know how precious that is.

I have been around to drive my mother to hospital and I’ve also been reminded of what a strong bond my parents have. The way they relate to each other on a daily basis is inspiring.

My friends are coming over for 6pm gin and tonics and they are getting to know my parents, which thrills me.

Mum and I have spent hours watching BBC mini-series together and yelling at the telly when a character displeases us.

We ban chocolate from the house, but then someone will break the embargo and produce a block of Lindt at just the right time to rounds of applause. We’ve started an unofficial book club, where novels are quietly passed from bedside table to bedside table.

It’s not always beer and skittles.

My parents are fastidiously clean and I can be something of a carnival.

There was a point where I was taken to task over a very slightly splattered splashback and a Mexican standoff ensued for three days where I was banned from the kitchen.

As we approach the one-year mark I worry they are regretting making life so good for me that I may never leave.

But I’ll go rebuilt, grateful for these extra moments we’ve shared and freshly reminded how lucky I am that in the lottery of life, I landed them as parents.

While it’s been a supremely positive experience for me (I would give this hotel five stars on TripAdvisor), last year a study found the parents’ quality of life fell when an adult child “boomeranged”.

So I asked my folks how they felt about the situation and they had this to say.

It’s like old times. The banter, the chats, the sharing of thoughts, recipes and experiences enhances that unique mother-daughter bond but not from afar. It’s a more deepening connection. When your children are young, largely they learn from their parents; there has been a shift in this.

From Simone I have learned to become a better recycler. Cling wrap and plastic bags are banned and we only have one all-purpose, non-toxic cleaning product. It’s funny how history repeats itself – I did point out that a plate on top of refrigerated goods is not new, that is how my mother managed before cling wrap.

I have also learned what her job entails as I hear her interviews and see the research and appreciate the time it takes to be an interesting and informed writer.

I have also learned some colourful new swear words.

That our daughter has embraced living with us again brings joy to me. It must mean that we are all affable and considerate enough to cohabit, which is reassuring.

I remember when Simone was born and thinking that as parents we had a commitment for the next 18 years … and here we are now, more than double that time.

Watching her grow up and mature has been a fascinating journey and I believe her moving back home is still part of that evolution. As a parent I love that we are a safe harbour that she can shelter in.

From me Simone gets 24-hour chauffeuring to restaurants and friend’s dinner parties … generally attended with a bottle of my wine under her arm.

She puts up with me practising the banjo.

I gave up my music room (now her bedroom), bathroom, desk and wardrobe for her when she moved back. It’s extremely lucky I don’t have any clothes. My wife and I have had to get used to the fact she also uses her bedroom floor as a second wardrobe. We’re very tidy people.

Being retired, this is such a wonderful time in our lives, made richer by being able to share it with our daughter. Having her in our lives is a constant delight.

But let’s revisit that in six months.