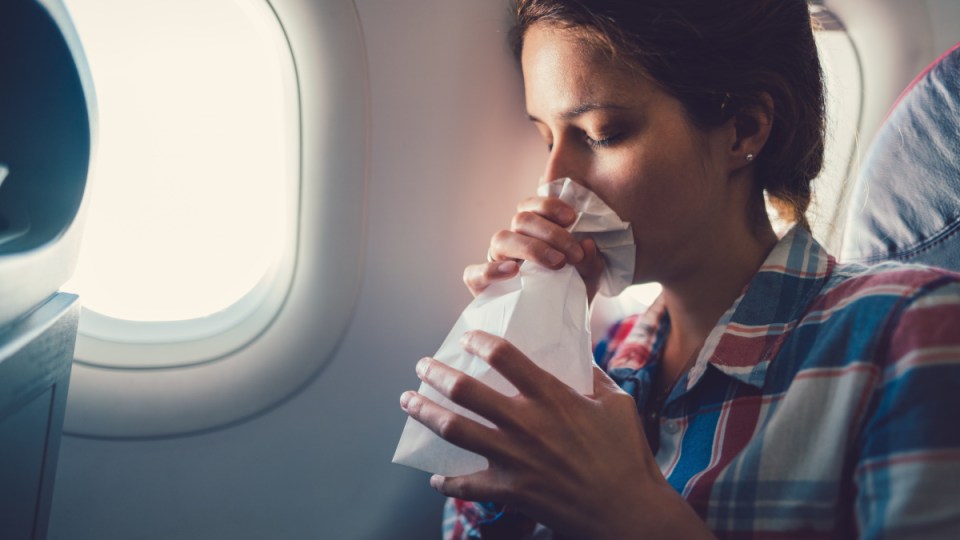 Reaching out to an anxious flyer is risky business. But sometimes there's a happy ending. Photo: Getty
opinion

Many years ago I was on a flight to the US and seated next to an anxious fellow who couldn’t fit into his seat. He asked if we could keep the armrest up, effectively so his excess could spill on to my seat.

I was a beanpole then, and chronically stoned on positivity – I should have been a Mormon door-knocker – so what the heck? For 16 hours, I had my own beanbag to cuddle into.

The only real drama occurred when he ate his dinner very quickly then asked for another. This had worked for him on previous flights but on this flight all the dinners had been eaten and he actually burst into tears.

Not only anxious but fiendishly hungry

I had a family-sized fruitcake in my carry-on because I was moving to New York just before Christmas, didn’t know anybody and was planning to fashion a homesick Christmas Day for one.

I asked him to hold the cake while I fetched a knife from the galley to cut it into slices for sharing. When he said not to bother, I thought he was refusing the offer.

By the time I got back to my half-seat, half of the cake was gone – and what I took to be a look of shame on the man’s face was in fact disappointment that there wasn’t any ice cream.

I’ve had a few experiences like that on planes, where I’ve been accommodating and seen my good will elevated to the status of potato chips. GIMME MORE! GIMME MORE!

So latterly I’ve tended to avoid eye contact with my neighbours on flights – and when they’ve attempted to talk to me, I’ve adopted an old-crank’s squint and squawked: “What? Sorry, what?”

Early this week, though, I got … involved

Somehow I’d scored an upgrade on a flight from Sydney to Melbourne. This amounted to more legroom, and a proper meal with red wine instead of a dry cracker and a plastic cup of creaming soda.

So maybe my long-lost benevolence was lured into the open by my good fortune.

I ordered the soba noodle salad. My companion, a younger woman in the window seat, ordered the pork and fennel sausage roll and a Coke. She’d started the flight with a sparkling wine.

The flight was a little bumpy, but no more than if we’d been in a speedboat on a light chop. Occasional little waves asserting themselves.

I cleared my tray and the attendant took it away, and when I turned for a quick look out the window I saw the woman hadn’t touched anything. The green salad, the sausage roll with its dollop of tomato sauce, the Luke Mangan gluten-free cookie … all of it lay there unloved.

She’d sipped some of the Coke, but that’s it. I was looking at her tray, not at the woman, out of my habitual avoidance of getting involved.

Then I broke my rule and looked at her

She was staring straight ahead, looked a little pale, and my immediate worry was she might vomit over both of us.

“I’m just really fearful of flying,” she said. We hit a mild bump and she made the face of terror.

“If you can look upward,” I said, “you’ll see the captain hasn’t put the fasten seat-belts sign on. So nothing’s really happening.”

So she told me her story: she’d upgraded to business class using points. It was a first-time treat. So she’d decided to go to the lounge three hours early – where she gradually worked her way through a couple of bottles of pinot grigio.

“Like, on the basis of five glasses per bottle,” she said.

She explained she was a social worker who’d had a horrible day and the booze was meant to take the edge off.

At first she felt fearless

Then, instead of becoming unsteady on her feet or even nauseous, the more she drank, the more she became terrified to the point of turning to a statue.

And that’s how she was in her seat.

So I told her that the older I get, the less I like flying. And the way I cope is by imagining we’re on a ship at sea – because I like being at sea and I don’t get frightened by big storms.

Well, she didn’t like boats either. But she wanted to know about my happy life on the Southern Ocean chasing birds.

So I built a virtual campfire and told her some stories and soon enough, I said: “Look out the window and count to ten.”

We were just about to touch down.

A few minutes later she said I was her hero, for pity’s sake. I’d helped her get through it.

Which is all very well, being a great person and such. But I’m not going to make a habit of it.

Fear of flying: Sometimes reaching out pays off