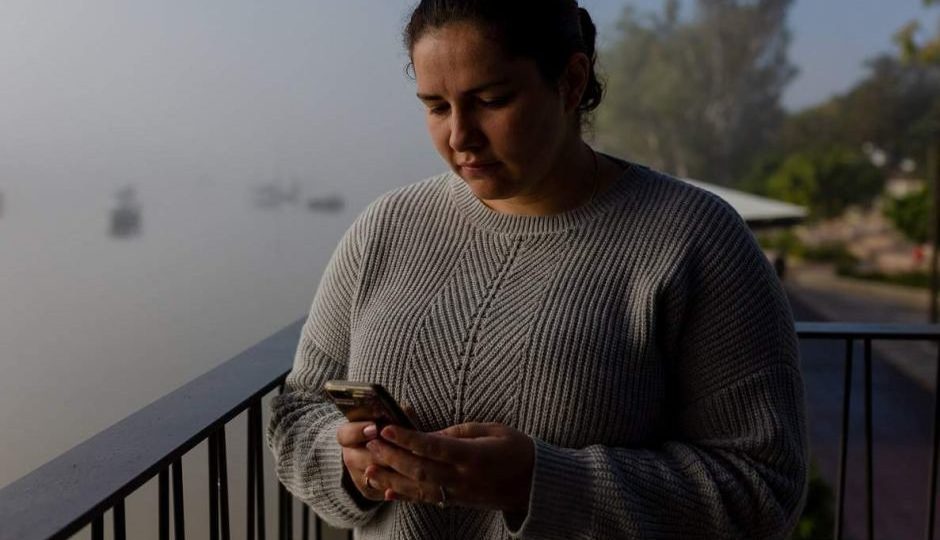 Melanie Dansie interacts with Facebook on her terms so she can remember her mother as she was.  Photo: Alice Roberts

Several years ago, the conventional wisdom was simple – you don’t unfriend the dead.

But the internet age has affected the way we grieve so much, that knowing when it’s best for you to cut digital ties has become a common question in online forums.

“A person whom I knew for nine years has passed on – should I unfriend him on Facebook?

“People keep posting condolence messages and tagging that person, and it makes me feel sad, but I don’t want to lose the only link I have got that remains of that person.”

With 60 per cent of Australians on Facebook (according to the Bureau of Statistics), most people will have had some digital interaction with a loved one who has died.

“It definitely triggers some feelings in unexpected, casual moments, but sometimes it’s nice to go on there and look at old posts or photos,” Vanessa wrote in a Facebook post.

For Melanie Dansie, Facebook has become a comfort in the year since her mother died in a car accident.

“We get the ‘On this day’ memories: Mum was really the glue of the family … there’s always lots of photos of Mum doing stuff with the kids popping up during the year – things that she posted,” Ms Dansie said.

“For me, it helps me remember what’s important, which is who Mum was and not what happened to her.

“Those memories just remind you of what a loving person she was and how committed she was to us as a family.”

For others, Facebook’s Memories have been more problematic.

At an inaugural Death Cafe gathering in regional Queensland, a young man relayed how he eventually unfriended someone who had died by suicide, because he constantly received Facebook notifications.

“It made it difficult to come to terms with the fact he was dead,” the man said.

So why has the question of unfriending the dead on social media become an issue?

Psychology academic Jessica Blower from the University of the Sunshine Coast said her research had found higher levels of anxiety and stress among people who interacted with the deceased on Facebook.

“What we are hearing now anecdotally is because of Facebook currently capitalising on nostalgia,” she said.

“Individuals are feeling more and more that they need to defriend the dead, or at least deactivate the follow functions, so they are not getting some of these reminders.”

Much has changed since 2013, when an article titled You Don’t Defriend The Dead was published in the journal Death Studies.

While Facebook’s Memories can show wonderful moments, it can bring up not-so-pleasant posts, such as expressions of grief, for people who have lost someone.

Ms Blower said she would not go so far as to tell people not to share their grief online, but suggested that people ask themselves beforehand: “What do they hope to get out of it?”

“Then use that information to reflect, if they can, on whether what they’re doing is best for them in the moment – a very hard ask during a time of bereavement.”

Posts from a deceased friend

Her research found that almost one in five Facebook profiles of deceased users were being managed by friends and family, generating a particularly negative impact for the bereaved.

Dr Kerry Gruber Vella, the director of psychology for Central Queensland Health, said she had increasingly witnessed the effects of such account activity.

“The sad thing is that for some of those people hosting those pages, it’s part of their process for managing their own grief,” she said.

She said the person managing the Facebook page could approach this in a controlled manner, but that wasn’t the case for others.

“You might be looking at Facebook for five minutes when you have a break at work, not thinking that you’re going to look at that [grief-related] content, and then it comes up and you’re flooded with difficult emotions but you have to go back to work.”

It is that control – or lack of control – that then becomes difficult in the grieving process, particularly in terms of complex grief or trauma.

So rather than unfriending a deceased friend, Dr Gruber Vella suggested limiting the account’s posts from appearing on your newsfeed.

“One of the things you can choose to do is go to your friend’s Facebook page and look at it when you choose to,” she said.

“If you do that and you can look at the comments, it can help you cope with that experience and process.”

This gradual exposure means when a post comes through your feed, you won’t be taken by surprise.

Dr Gruber Vella suggested people seek professional help to understand the grieving process and learn to expect that emotions could be triggered seemingly out of nowhere.

Tama Leaver, an associate professor in internet studies at Curtin University, said Facebook had responded to criticisms about unwanted posts and notifications from deceased Facebook friends.

“There were quite a number of people who had passed away and their algorithms started recommending people become friends with deceased people which, of course, was very unsettling,” he said.

In response, Facebook initially offered “memorialisation” through which an account was locked in a particular state and the “On this day” memory feature would not kick in.

“They’ve extended that to include a legacy account, where you can nominate someone to have limited access to edit your account after you pass away,” Dr Leaver said.

However, not many people had been aware of this feature before their death, leaving little that could be done with their account, he added.

Dr Leaver said while it was important to go to a place for memorialisation, the issue was more about digital platforms being consistent in how they addressed death.

“We are still trying to find our way about,” he said, adding that social norms needed to emerge about what was and wasn’t appropriate.

“If I am posting things to my friends, should I be reminiscing about something we did years ago, and how much detail should I share?

“There are a lot of issues to be considered.”

If you or anyone you know needs help

When should we unfriend the dead? Facebook and grief in the digital age