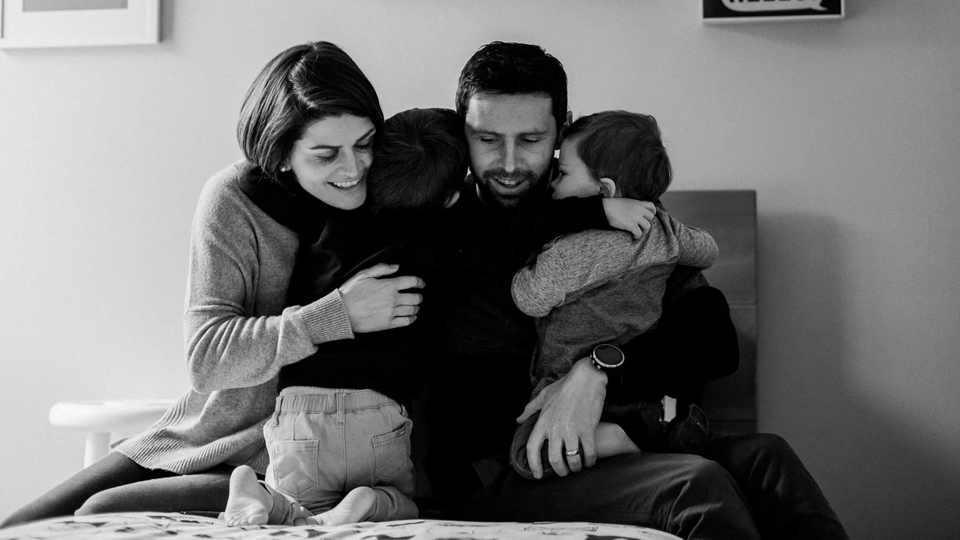 "Alfie fought to stay alive for his mum so that she could leave with some peace", said Leigh Chivers, at home in 2017 with Sara, Hugh and Alfie.

At 6.35am on Sunday, Leigh Chivers will hit the sea in Queensland’s Palm Cove for the Cairns Triathlon to fulfil a promise made to his late wife, Sara.

That promise was that he would qualify for the famous Hawaiian event.

In late January, the Melbourne engineer lost Sara, 34, to brain cancer. Three months before her death, the young Melbourne mother-of-two wrote a pragmatic letter of advice for her sons Hugh and Alfie. Translated into multiple languages, it was read around the world and raised money and awareness for brain cancer research.

In the early evening of June 4, Leigh also lost Alfie, who had turned two on April 3, to a rare form of brain cancer. Alfie was diagnosed in late September and spent the last eight months of his life in hospital, fighting the cruel pear-sized invader in his tiny head.

During the triathlon Leigh will wear Sara’s blue running hat and purple socks for Hugh, 4, and carry a stuffed koala for Alfie, who loved to cling to his dad like a marsupial.

“I know they will be cheering me on”, he said.

Ahead of the race, Leigh told The New Daily of the unfathomable grief of having half his beloved family carried off by cancer within months, and what he learned from the life and death of his youngest boy:

I see it as a privilege to be Alfie’s dad and Sara’s husband.”

I don’t care how short or tragic our lives were together. There was no place that I would rather have been than right next to them through every moment of the past 14 months, and the 10 years before that.

After Alfie’s first surgery, Sara and I were in ICU with him. He was in an induced coma with tubes everywhere. The diagnosis: a grade-four – worst possible – extremely rare and nearly impossible-to-treat tumour.

Our hearts were completely broken as we cried at his bedside. Sara and I said to him then, ‘We are so proud of you little man, you are so unbelievably brave’.

About eight months later, with immense pressure in his brain from the tumour, eight months of torturous treatment, no food or water for 10 days, Alfie continued to fight to keep breathing, even for his last breaths.

I leant over and whispered in his ear again, similar to when it was Sara and I. ‘Alfie, Mummy, Daddy and Hugh love you very much. Rest now, Alfie, it’s okay. You’ve done more than enough and we will always be here for you. Always’.

It tears your heart to pieces having to tell your son to let go, that there is nothing more for him to fight for.

Until then, Alfie fought tooth and nail to survive, with dignity, courage and a commitment to fun. I could not be more in awe of him.

Over 10 operations, five months of high dose chemotherapy, three infections, a large brain cyst and multiple complications. Months of vomiting and headaches. Yet he still smiled when he saw you, kicked his little leg, was ready for a play.

He would demand hospital staff put on the Wiggles’ nursery rhymes. He chuckled loudly to himself at Peppa Pig. During the chemotherapy phases, Alfie survived months on Bega cheese blocks and seaweed rice crackers. He sat by the window with his favourite books, That’s Not My Train and Spot’s Noisy Farm.

My favourite memories of Alfie are stuffing his face with chocolate cake at Hugh’s third birthday and his talking. The quiet words and singing that he would do if you paid attention.

Alfie made it possible to endure that he and Sara were sick at the same time through his character and resilience. He was amazingly adaptive. Each night all I had to do was put his sleep music on and the little angel would just roll over onto his left side and shut his eyes.

When he went into the operating theatre for one of his later operations, he  looked around and, realising where he was, rolled over and went to sleep before they even gave him any medication.

I really believe now that people have a soul and that there must be some higher wisdom that comes through that, because I cannot believe Alfie was able to tolerate what he did, the way he did, without some knowledge beyond that of a two-year-old.

I also learnt that once we are born we are entitled to nothing more and that everything we get and everything that we experience is a gift. Be grateful for you what you have.

When he was diagnosed, Alfie was the toughest, brightest, most adorable and healthy-looking 18 month-old, yet he was handed a fate that was impossible.

I have tried and lost this battle, brutally, twice. The future I thought I would have doesn’t exist anymore. Apart from Hugh, who I worry about daily now for a lot of reasons, my future has lost a lot of the meaning and goals I previously used as fuel.

Sara encouraged me to get on with life. I’ll keep going because I am alive and because I can. Hugh and I have a lot to live for, and a lot of living to do for Sara and Alfie.

I see Sara in various places, often living things and movement. A gust of wind at her service that blew over her photo board. There were once magpies swooping (nicely) in our backyard and Hugh was chasing them and playing – that was Sara.

There was a frogmouth owl sitting outside Alfie’s room the night he passed. I can’t decide if this was Sara or Alfie. I think it was both. The same type of owl was sitting outside the window when she had photos taken in October for a Vogue brain cancer story.

I wonder now if part of me should just embrace that I will die. I’ve seen it so much recently. How comforting to know two of the people I love most in this world are already on the other side – there is nothing left to fear”.

‘There is nothing left to fear’: Leigh Chivers on the pain of losing wife Sara and son Alfie