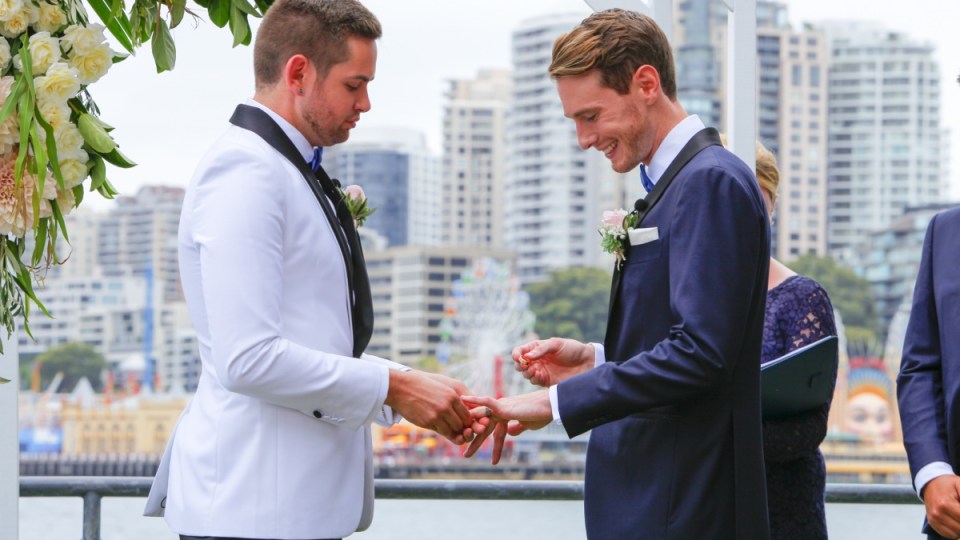 Michael Petchell, 28 and Benjamin Gresham, 29, have invited Australia inside one of the country’s first legal same-sex weddings – and the first beneath Sydney Harbour Bridge, where the couple shared their first kiss.

There was no ‘love, honour and obey’ at this historic ceremony. It was all about mutual adoration and a shared love of Disneyland.

“Thirteen-year-old me really struggled with being gay,” Ben told The New Daily.

“If I could’ve seen into the future, seen my smile now and seen how happy my husband makes me, it’d have given me the hope and comfort we all need to know we’re OK, and can have the same love our friends and parents have.”

The men’s mothers walked them down the aisle, which was covered in petals scattered by bridesmaids.

Each proud mum whispered warm words of encouragement, as their boys fought tears and nerves. The significance of the day weighed heavily on both grooms.

“I knew it was more emotional than just a wedding,” Michael told The New Daily.

“What we’re doing was a powerful symbol for so many others.”

Michael and Ben’s special day was not due until the end of 2018, but it got brought forward when they won a competition to have their entire $40,000 wedding paid for by media company Eikon and 20 different wedding suppliers.

The aisle was a long pier leading to the water’s edge where they met a registrar whose excited giggles showing her excitement at taking the historic role, against the backdrop of the Opera House and Sydney skyscrapers.

Same-sex marriage was legalised in Australia in December after a lengthy and often divisive public vote. Same-sex couples had to give a month’s notice before getting married, making early January the first time they could legally do so.

During the postal survey, some gay people were devastated to discover their own family members would be voting against them. Not so for this couple – their entire families could not be prouder.

Vickie Petchell, Michael’s mum, said: “I’ve seen the struggles they’ve gone through – these guys really deserve this. They’ve found such happiness and the love of their lives. That’s all a mother wants.”

Michael’s sister, Anna Petchell, said: “They fought for this day, copping abuse from people when handing out leaflets at train stations, asking them to vote ‘Yes’. They got up at 5am to catch people on their way to work. They wrote a beautiful letter and handed it out to their Blue Mountains community. It said: ‘We’re your neighbours, just two blokes who love each other’.”

The day’s specialness struck Anna at the ceremony: “The substantialness of it hits when you hear the celebrant say ‘two people’. Last year at weddings I attended, it was ‘a man and a woman’.”

Somewhere Over the Rainbow was sung at the ceremony. A bible reading by Ben’s sister added some religious tradition.

“I was harmed by the church, but faith is still important to us,” Ben said. “We don’t believe being gay and Christian are incompatible.”

The reception was held at Zest Waterfront Venues, The Spit – overlooking the water where the couple first made a commitment to each other while kayaking.

The grooms were welcomed by their MC, Ian Ratcliff, brother-in-law to Ben.

“You have no idea how long I’ve waited to say this next sentence, and how much it means to me to finally say it,” Ian told the crowd. “Please welcome, Mr and Mr Gresham-Petchell.” The crowd went wild.

A star of the day was Naomi Gresham, Ben’s 93-year-old Nanna. She attends church every Sunday and persuaded everyone there and in her Hunter Valley community to vote Yes.

Naomi said she never thought she would see this day, but had always hoped for it.

“I never understood ignorance. People are who they are. Nobody should be judged or not respected,” she said.

“I’m so emotional to see Ben so happy after all the years he’s wanted nothing more than this. I love him so much and I love Michael, too – so I’ve gained another grandson.

“It’s the loveliest wedding I’ve ever been to.”