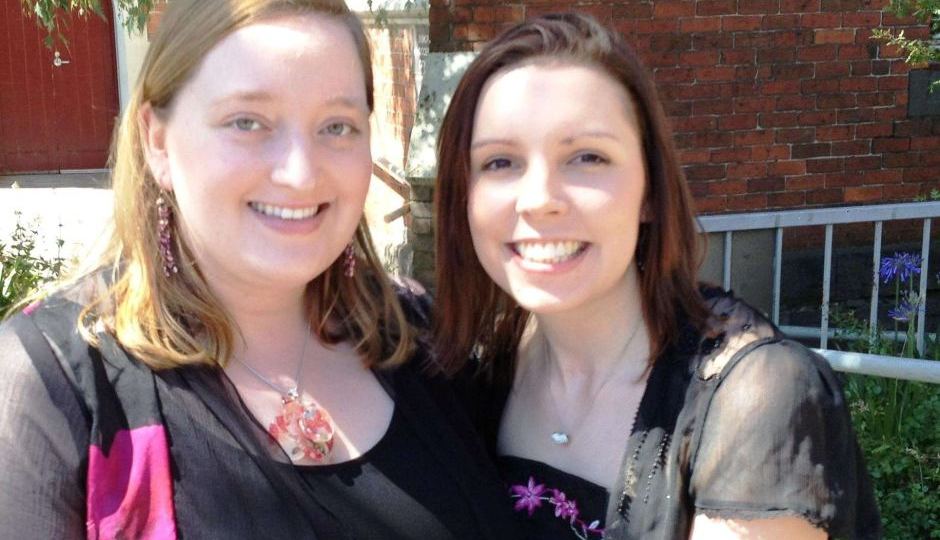 Megan Stapleton (L) and her partner Stephanie Dyball (R) will be married next Thursday. Photo: Supplied/ABC

What is likely to be the first legal same-sex wedding in Australia will happen next Thursday, after a lesbian couple in Melbourne successfully obtained a waiver from the one-month waiting period because their wedding was already paid for and family were travelling from the UK to be there.

With same-sex marriage finally enshrined in law, the first gay weddings were expected to happen from January 9 next year.

That was because all couples planning to wed – gay or straight – have to give one month’s notice.

The couple successfully applied for a waiver of the one-month waiting period because their celebrant told them if they provided the evidence to the Birth, Deaths and Marriages Office they may be given the right to legally marry earlier.

Ms Stapleton said the couple waited for years to be able to get legally married but decided to book the wedding months ago because they were sick of waiting for the law to change.

“We waited and waited and we got a bit tired of waiting and thought, we’re not going to wait around any more for them to change the law, let’s just have a wedding.

“We started planning towards the end of last year because family were coming from overseas and interstate and we wanted to give them plenty of notice.”

Ms Dyball said they took evidence that they had booked everything a year ago to the Births, Deaths and Marriages Office.

“We took the evidence that my family had booked their flight from overseas back in about January-February, and we filled out all the forms and then they did say ‘you know don’t get your hopes up’ so … to be honest our hopes weren’t too high. But we were quite thrilled when they put it through,” she said.

Ms Dyball and Ms Stapleton met in Beijing in 2011 and first became friends before their romantic relationship developed.

Ms Dyball is from the UK originally and the couple timed their wedding for December in order to lure their cricket-mad uncle to come during the Ashes series.

Ms Stapleton said even though they were already looking forward to their white wedding, they felt differently now that they knew the wedding would be legal.

“It’s still sinking in I think,” she said.

“Everything’s happened so quickly. We just thought it wouldn’t happen this fast even once the law was passed. We just didn’t want to think about it being possible for us because we didn’t want to be disappointed.

“The day was always going to be special regardless, you know it’s the two of us and we’re just really excited to be able to say those words that mean something in front of our family and friends.”

Their celebrant, Jason Tuazon-McCheyne, is a same-sex marriage activist who has just had his legal Canadian marriage to his husband legally recognised.

Mr Tuazon-McCheyne said he believed it would be the first same-sex marriage in Australia because waivers were not easy to get.

He said after officiating hundreds of heterosexual weddings and 50 gay weddings that were not legally recognised, he was honoured to be the celebrant at one of Australia’s first legal same-sex weddings.

“I think I’ve conducted over 50 weddings in the last 10 years because people don’t want to wait for the law to change,” he said.

“I knew that there was a provision called ‘shortening of time’ for the lodgement on the Notice of Intent to Marry form … sometimes they’ll allow a shortening so I rang the girls and I said: ‘I think you have grounds for it because you’ve booked your wedding in May; You’ve paid your deposits, you’ve got family coming from far away.

“It’s really exciting. After having conducted over 1000 weddings and 54 of gay couples … being a gay man myself and waking up on Saturday morning and having my Canadian marriage recognised was just amazing.

“It’s really special. I feel really grateful as a gay man to be able to officiate a gay women’s wedding and it’s not a stunt. It’s been planned for ages. It’s just going to be a beautiful time and you’ll have all the legitimacy and legal rights and obligations as anyone else and it’s wonderful.”

‘The provision is there for anyone to apply for’

Mr McCheyne said the provision was there for anyone to apply for, but was not easy to get.

A spokesperson from the Attorney-General’s Department said the circumstances for authorising a shortening of time were set out in detail in Schedule 1B of the Marriage Regulations 1963.

The Attorney-General’s department lists examples why a waiver of the one-month wait may be offered including that “arrangements and non-refundable payments of a considerable sum have been made for the proposed wedding, or for any celebration associated with the intended marriage, and the date for the wedding or celebration cannot be changed”.