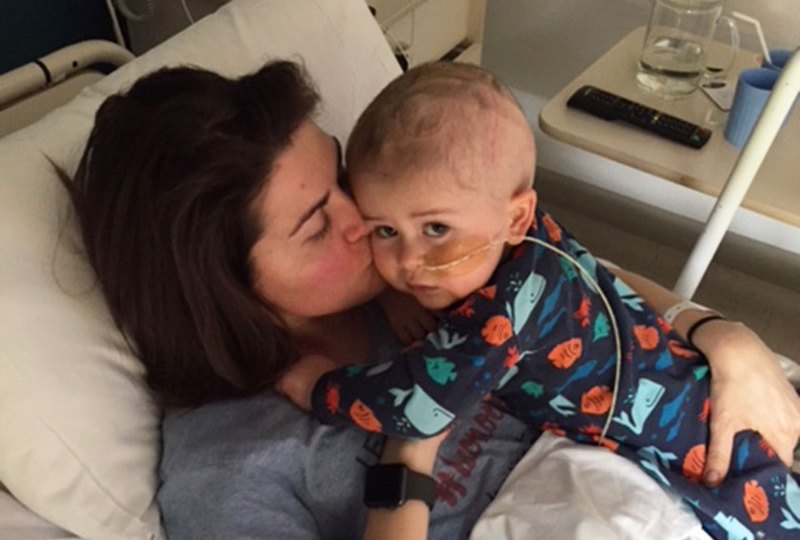 Two months after she wrote a heartfelt letter of life advice to her sons Hugh, 3, and Alfie, 20 months, dying Melbourne mother Sara Chivers has moved from her home into a palliative care centre.

In March, Sara was told the brain cancer she fought in 2008 was back, as three incurable, inoperable tumours. Then in September, she and her husband Leigh Chivers, both 34, faced another devastating blow when Alfie was also diagnosed with brain cancer.

Sara’s palliative care centre is at the same hospital where Alfie is being treated. When he is wheeled in his pram to visit his mum, the side of his little body unaffected by his tumour wriggles with delight.

Despite surgery, Sara’s tumour hasn’t shrunk and its advance has left her struggling to walk and talk.

“I don’t really know how much time I have left,” Sara tells The New Daily in an email typed just with her left hand.

“Right now, I’m more terrified about not how much time, but how much quality time.

“Each day brings new challenges. First, it was just some physical weakness, then it impacted my ability to walk or care for the boys.

“Now, the most devastating impact is my speech and energy to even think clearly are being taken away from me.”

Despite her advancing illness, “Sara only knows how to be Sara”, Leigh tells The New Daily.

“She’s brave enough to always be honest no matter what the situation, which means she can connect with anyone and everyone. I fell in love with Sara and this unique bravery, and it has been one of the things that has sustained us.”

They were told that to survive, Alfie needed high-dose chemotherapy and radiotherapy. But there was no guarantee the photon radiotherapy machines in Australia wouldn’t have side effects: his life might be saved, but at the expense of his ability to walk or talk.

Seeking international solutions, the family succeeded in having Alfie accepted into a trial at St Jude’s Research Hospital in Memphis.

It guaranteed him access to a proton radiotherapy machine which would have fewer impacts, but meant he would be taken away from his mother for up to a year.

“Imagine trying to choose between compromising the quality of your wife’s final moments or your son’s entire future,” says Leigh.

“It was a devastating choice. But in the end, with Sara’s strength, it was really simple. It all came back to doing what we believed would be best for our son.”

Alfie was booked to fly to the US, but in another cruel twist, complications from surgery meant he missed the deadline to join the Memphis trial.

Plan B? Alfie has started up to three months of high-dose chemotherapy, and faces more surgery, radiotherapy and additional chemotherapy. He will be in hospital until July 2018, and the family has applied to Medicare to approve his application for the less harmful proton radiotherapy in America.

“He can no longer walk or crawl like he could, but it is just a matter of time and training to learn again,” says Sara. “Alfie still has every bit of his personality and he is saying new words again each couple of days.”

An engineer, Leigh hasn’t worked since Alfie’s diagnosis but his employer Beon Energy have continued to support the family, fundraising more than $61,000 for Carrie Bickmore’s Beanies 4 Brain Cancer charity.

“I can’t remember where I heard the quote, ‘the secret of life is to die before you die’, but I feel part of me is dying through this experience with Sara and Alfie,” says Leigh, who is experiencing stress-induced symptoms including a constantly pounding heart.

“I can feel myself changing. I don’t know who I will be in the future.”

There are positives, he says: “Sara and I have created so many unforgettable moments together. It was all possible because she was brave enough to keep creating memories, and still is.

“We haven’t wasted a moment.”

Sara’s approach to her sitution is “pretty simple”, she says.

“It’s about trying to get out of bed each day, putting one foot in front of the other so that I can spend time with my boys.

“Although I’m restricted in what I can do, I’m still enjoying the little things in life, like a morning coffee with Leigh.

“The reality is unthinkable things happen to ordinary people. I want people to know I am not a fictional concept, but a woman like you or your wife, daughter, mother.

“I am terrified of dying but I want to shine a light on a disease which isn’t picky in its victims. I want a cure for my beautiful Alfie.”

You can donate to a Go Fund Me page set up by Sara’s sister, Stephanie, to raise money for the family’s daily expenses.

Sara Chivers: ‘I really don’t know how much time I have left’