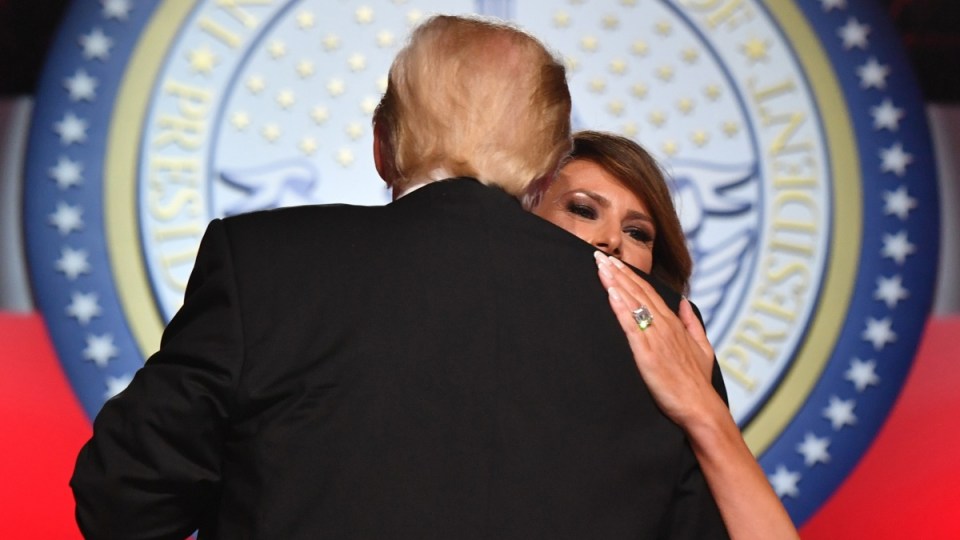 Donald and Melania Trump's inauguration dance could only be described as awkward. Photo: Getty
analysis

Deftly swatting away her POTUS husband Donald Trump’s hand in Israel this week, perhaps Melania Trump was just being an independent woman who knew she wasn’t going to fall off her Manolos and didn’t need help.

Maybe, despite her spotlit role as First Lady, she was reluctant to be relegated to the role of pretty puppet in a high-stakes photo opportunity.

Or maybe the realisation has hit Melania—with the ‘kapow’ inevitability of a cartoon anvil—that she can’t stomach her husband anymore.

Even though he’s great at building walls and knows more about women and China than anyone.

Whatever the reason, her message was clear: hands off, mister.

“Well, this is embarrassing,” Iocal publication Haaretz wrote on its official Twitter account, complete with slow-mo footage of the moment.

It was also not unprecedented.

Melania has form when it comes to Donald smackdowns.

On April 17, the White House Easter Egg Roll was an unlikely source of tension when she got snippy and nudged him to place his hand on heart for the national anthem.

Their vexed body language was a talking point from the first days of Trump’s presidency, with Vanity Fair noting, “Until November 8, Melania Trump’s marriage provided her with a golden Fifth Avenue fortress, at a price—putting up with her husband’s humiliations and boorishness.”

That's a subtle nudge from Melania to remind Trump to lift his hand during the national anthem… https://t.co/P9XlYpjvcQ

A cynical interpretation is that while she knew what she was getting into when she married Trump 12 years ago as wife number three, the poor love probably thought the ordeal would be over by now.

She’d have baby mama cash in the bank, and could, as one insider hoped, become a late-blooming feminist icon with the inside track on being a reformed trophy wife.

Not so much. For now, she’s stuck.

Exhibit A is Melania herself. While she’s showcased a smorgasbord of fabulous couture on her first international tour, she’s worn as her main accessory—along with a lot of gold stuff—an unflinchingly grim expression.

Check out the photos.

She’s a beautiful ex-model on a global stage with the opportunity to launch a major charm offensive, but Melania looks like she’s being forced to listen to Don McLean’s Vincent while watching cats be euthanised.

She didn’t look any happier on Inauguration Day, when the Trumps pulled up to the White House to be greeted by Barack and Michelle Obama.

Donald lumbered up the stairs without a backwards glance at his stranded, off-guard wife.

That night, during their extraordinary “first dance” as president and First Lady, he rotated her stiffly, mouthing the words to ‘My Way’ over her shoulder as her expensive face froze in a rictus grin.

That’s why it’s time to call in the marines. There’s a woman who might need rescuing.