There’s a scene in the documentary Weiner, where the disgraced US Congressman Anthony Weiner – felled by a sexting scandal in 2011 – is seen skipping down the street during a parade, brandishing a flag pole, waving it back and forth, in the way a little boy might gleefully empty his bladder upon the great outdoors.

This is probably Weiner at his most joyous, at least in this award-winning film that follows his attempt to resurrect his political career in 2013, only to have it flame out spectacularly.

In the end, he traded his one shot at reclaiming a public service career – he was vigorously running for mayor of New York City – for the mysterious thrill of sending pictures of the bulge in his underpants to women he didn’t know. If it makes any difference, the unfortunately named Weiner never went the full Monte. 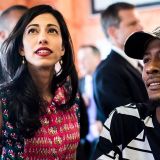 Clinton aide separates from Weiner after another sexting saga 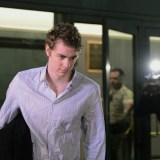 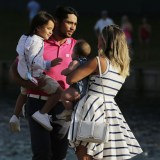 It certainly made no difference to his wife, Huma Abedin, a top aide to Hillary Clinton. This week it was revealed that Weiner had not only sent another pic of his bulge to a woman, but also of his small son who was reportedly sleeping next to him at the time.

That was it for Abedin: the marriage is now over and Weiner, formerly one of the hard men of US politics, who enjoyed nothing more than a fight on the floor of Congress, is free to quietly sext away for the rest of his shrunken life.

Why did he do it?

In writing their virtual obituaries, US pundits have wondered what’s driven Weiner’s self-destructive behaviour. Is it sex addiction, fetishized anxiety or a losing war between his compulsive self and mature restraint? The answer might lie in those underpants.

“It’s almost like he’s wearing a nappy,’’ says Lyn Bender, Melbourne-based psychologist and social commentator. “It doesn’t seem that sexual … if you begin to analyse it, it seems more like infantile behaviour, more like he’s seeking mummy’s attention or comfort.’’

It may well be that each disgrace has left Weiner nowhere to go but back to his jockey shorts, that he’s caught in a self-perpetuating cycle of humiliation and off-kilter intimate pleading.

Regardless, whatever sexuality is being exhibited by Weiner is less than juvenile, says Ms Bender, given that our own teenagers are increasingly in the news for sexting behaviour of a predatory or coercive nature – where a lot more is shared than what Weiner has offered up.

“I don’t think parents have to worry that their sexting sons are going mimic Weiner’s behaviour… he’s not a role model. He’ll look like a jerk to adolescents… an old guy sitting around in his underpants,’’ she says.

As far as sexting goes, one might say Weiner’s not quite up to it – not in the same league as our heroic footballers sending pix of their penises to one another, where once they might have compared biceps.

More importantly, the Weiner scandal – along with the footballer scandals, and other examples sensational shame gone viral –serves as a distraction from a bigger conversation that society is struggling to have.

“Parents have always been squeamish about their kids’ sexuality, that’s nothing new,’’ says Ms Bender. “Kids are out of our control when they’re taken over by sexual desire, they do crazy things, get involved with hopeless people … Sexting, and the technology that facilitates it, is simply amplifying a conversation that we’re already lagging behind on.’’

As much as parents may be in denial over their teenagers’ sex and sexting life, she wonders if it’s time “to not only talk about safe sex, but safe sexting”.

What about the boys?

It’s likely that the conversations in play are about protecting girls – but not necessarily about how boys might be damaging themselves.

Dr Andrea Waling is Research Officer at the Australian Research Centre in Sex, Health & Society at La Trobe University. She’s currently working on a joint project about the sexualisation of men’s bodies, and a side project on the dick pic phenomenon, where men send photos of their genitals – by consent or uninvited – to other people.

“There’s a moral panic about young girls,” says Dr Waling, “but we haven’t got our heads around young boys’ sexting practices. It doesn’t help there have been instances where high school boys have posted images of girls online … and the reaction has been that boys will be boys.’’

Waling says there needs to be research into what boys are doing “outside the events are predatory or coercive”. In part, Waling is interested in the expectations that boys may be struggling to live up to.

The sending of unsolicited “dick pics” is often characterised as an act of aggression, and sometimes rightly so. But there’s some evidence men and boys are seeking reassurance.

For the last three years, a New Zealand writer and lawyer based in London, Madeleine Holden, has been running a blog called Critique My Dick Pic. Holden charges $10 to appraise the aesthetic quality of the photograph – lighting, composition – but not the quality of the penis. In a previously reported interview with this writer, Ms Holden said many of the men will outright ask for her approval.

“I receive emails from men who are cripplingly insecure about their penises and when I look at their pictures, they are perfectly normal,’’ she said. “Men seem to have a preoccupation with size that is disproportionate to women’s preferences – that is, they seem to care way more than we do.”

Dr Ben Buchanan is a Balwyn clinical psychologist. He says that parents who become aware that their teenage son is sexting, should be more concerned, “if their young person is disrespecting the rights of others, by non-consensual sending of images or sharing images around”.

“If their child is engaged in consensual sending of images, alarm bells don’t need to ring quite so loudly.”

Even so, Dr Buchanan notes that many parents are always “going to find it hard to cope’’ with the fact their children are involved in sexting as an extension of ordinary adolescent sexual curiosity and flirting.

“It’s a technologically abled version of what kids have always done. The danger is that images can be posted and live on forever.’’

Watch the trailer for Weiner below:

Why Anthony Weiner’s sexting should worry every parent